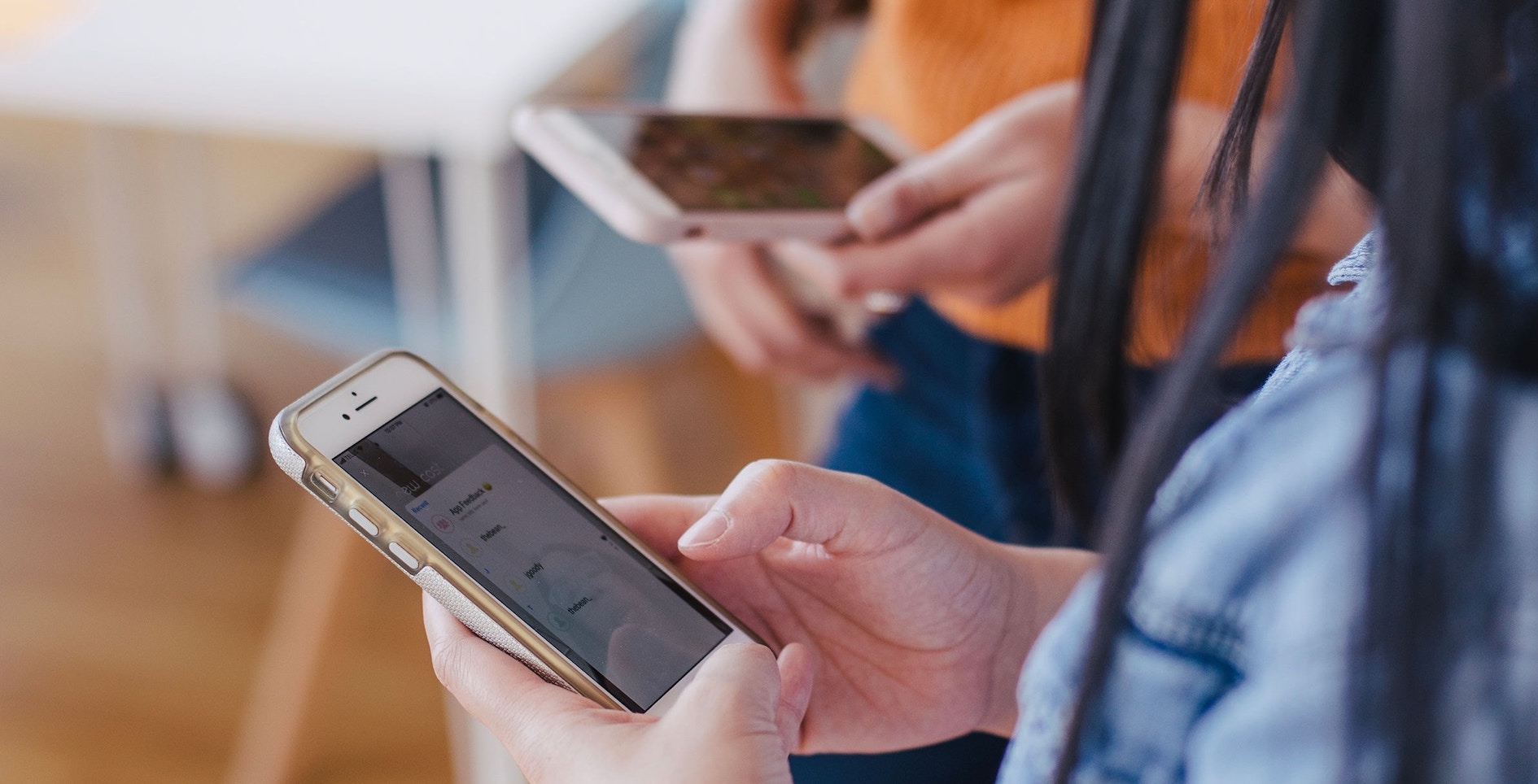 Meet supporters where they are with NationBuilder & RumbleUp

So you’ve decided to run for office or promote a critical cause. That’s huge––congrats on taking the leap to lead. But the decision to run or take action is just the beginning, and like with any major step in your life, you’re going to need the support of people in your corner to win your race or propel your cause.

That’s why we’re here. It’s our job to equip you with the tools necessary to identify your supporters and move them to take action. And because we know mobilizing people is essential to your campaign’s success––we’ve put people at the center of how we design our tools.

And, we’re not alone in doing so. We have a diverse ecosystem of app partners with the same priorities in mind, like RumbleUp: a peer-to-peer texting platform that allows you to meet your supporters (those people in your corner) where they are––on their phones, reading their text messages.

Here’s a look at how a NationBuilder integrated database and RumbleUp’s peer-to-peer (P2P) texting can help you create an ultra-personalized approach to your campaign communications for the following uses:

Fundraising
To get your campaign started, you’re going to need a sustainable base of support.

RumbleUp clients have reported that the average gift they receive by text is larger than an average gift made by email. Through NationBuilder, you’ll have access to rich data about your supporters––how many times they have donated, how much, and how recently. By having their donor history readily available, you’ll know exactly where they are in their supporter journey. And with RumbleUp’s P2P texting, you can utilize this information to deepen your relationships with your supporters and communicate with them in an organic, conversational way, improving the chances that they’ll donate again. 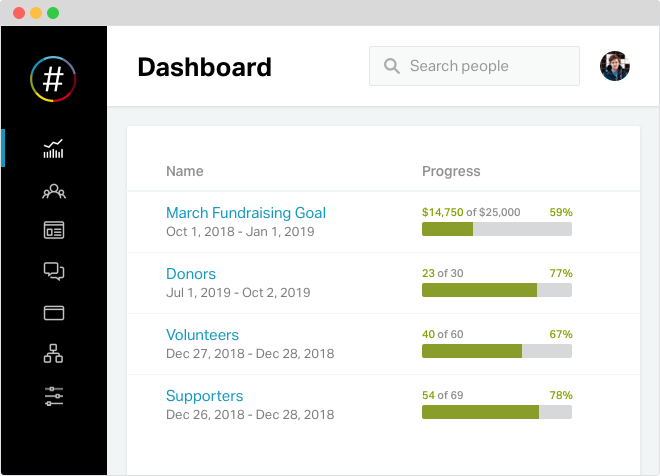 Remember that P2P texting is a fast and easy way for you to raise money all year long. Send recipients a link to your mobile optimized donation page with a message tailored to your audience asking them to support the campaign. Use custom tags to pull in relevant information such as their previous donation amount, a cause they care about, or custom donation link.

Events
Rallies are a great place to connect IRL with your supporters at scale and easily expand your circle of support by asking them to bring along friends. 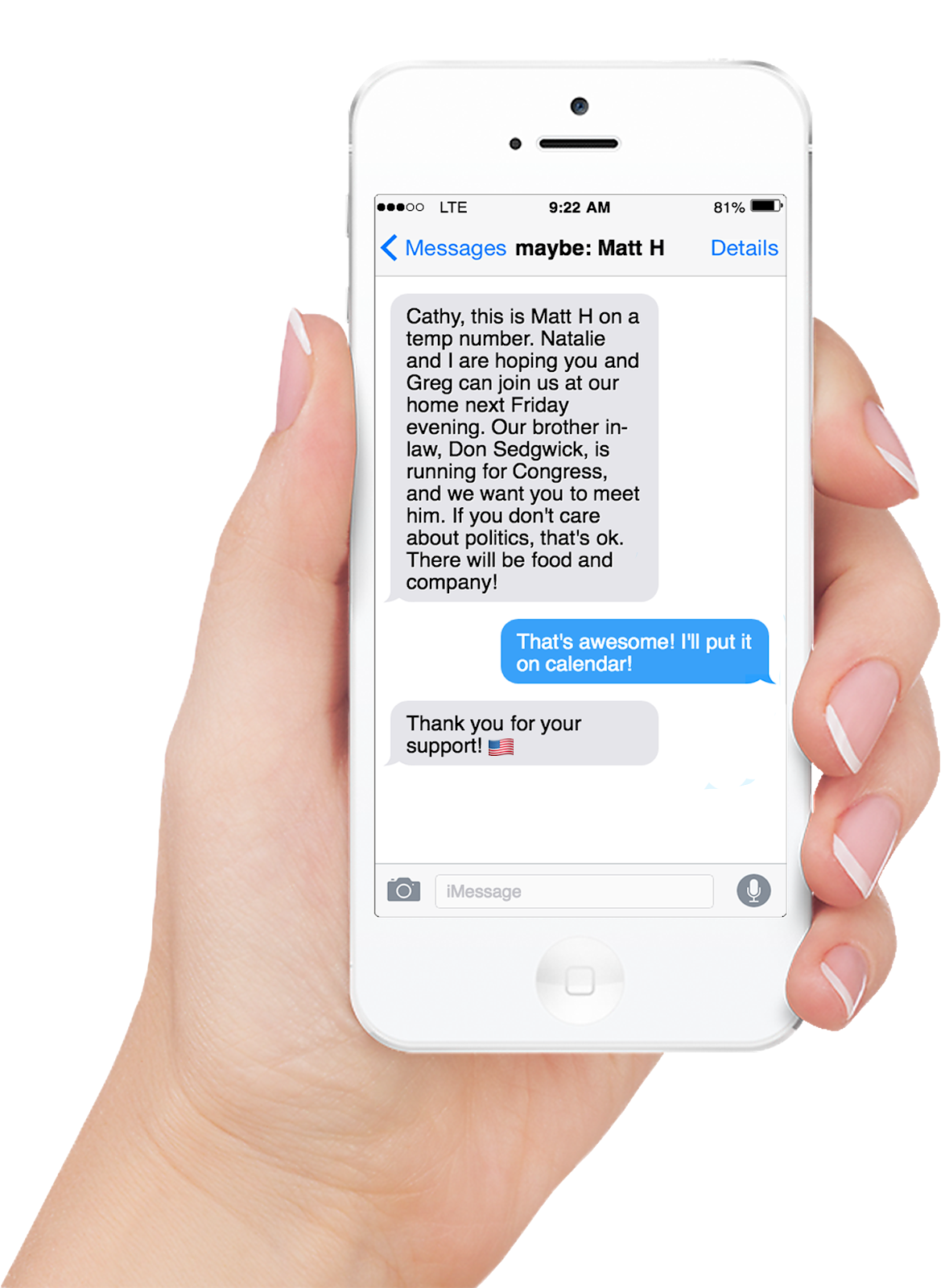 Fun fact: P2P texting can double the attendance of your events. Read more >

With a NationBuilder event page you can quickly communicate the details of the meet-up with your support base, allow them to RSVP, share out your event page on social media, and track that growing list of RSVPs for future engagement––whether it be text reminders for that specific event, or with their consent, updates on future events they can attend.

No one wants an empty event — especially if it’s your campaign kick-off. To get people out, send them a text invite. It’s been shown that the most effective way to dramatically boost event attendance is to send an initial invite text to people in the area the event will take place two days before, and then a reminder text the day of.

Casual conversational invites work best. By using texting to invite people in the area to your events, you’re able to quickly and easily answer people’s questions about location, transportation, what kind of food will be served, etc.

Use Case: Over the course of several months, a RumbleUp client sent invites and reminder texts to targeted audiences in more than 60 different counties for events happening across the state every week. First they would send an initial invite text with details about where/when the event would take place and ask if the recipient would be able to come. Then on the day of the event itself they would send a reminder text to those who replied, letting the recipient know they looked forward to seeing them there.

The campaign reported that when they initially started having these rally events, they struggled to fill tables. After they started texting invites and reminders to people in the area, they reported having standing room only because so many people were showing up––this is exactly the kind of attendance they were hoping for.

Canvassing
Door-to-door canvassing doesn’t have to mean committing countless volunteer hours to blindly walking up and down neighborhoods, only to be met with doors that never open because people aren’t interested or home. With a NationBuilder database, you can save a ton of time by using tags and filters to carefully identify who would be best to target with your canvassing efforts. And with P2P texting, you can reach out to them to gauge their interest in having a conversation about your cause before you even hit the streets. 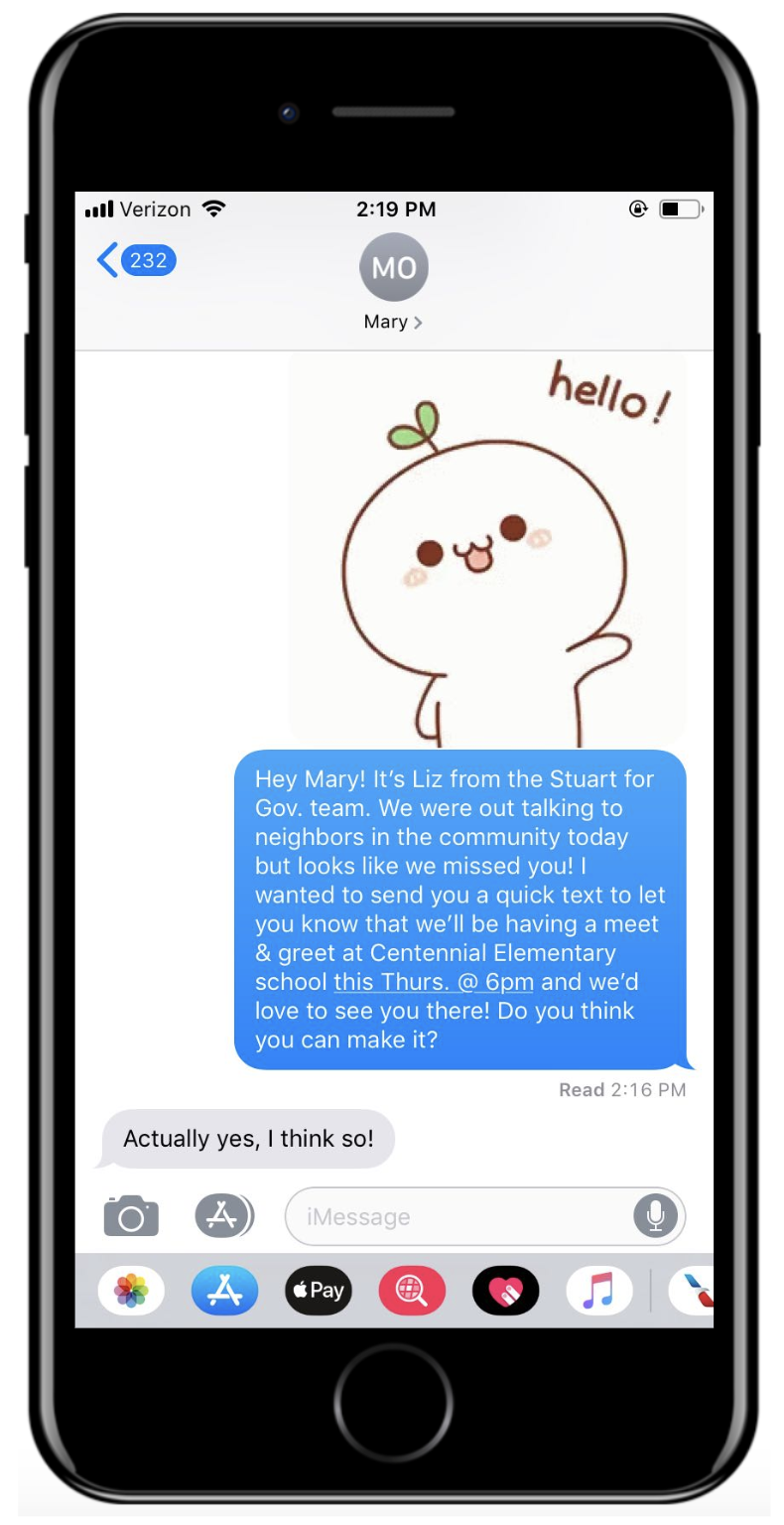 No one home? No problem. Missing someone at their door doesn’t mean you have to miss out on the chance to talk to them. Send a text to anyone who wasn’t home letting them know you stopped by and ask them a question such as what their top issue is or when might be a better time to stop by.

Phone banking
It’s not just about canvassing––we know your volunteer time impacts every area of your campaign, and making sure it’s used efficiently can make a big long-term impact on your overall efforts. So when it comes to phone banking, rather than having your volunteers’ calls end with voicemails, we’ve given you the option to send a text blast to your call list beforehand instead to let them know you’ll be reaching out via phone. And to maximize your phone banking efforts, you can carefully craft the audience you want to text using tags and filters in your NationBuilder database. This way, you’ll end up with more completed calls and extra volunteer time to allot to other important tasks. 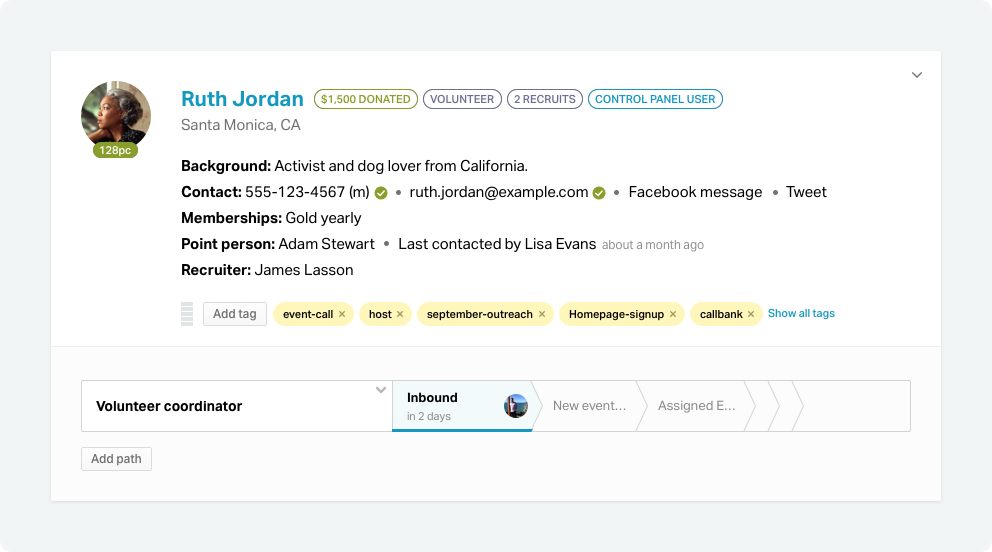 RumbleUp allows you to make your initial text outreach more conversational by enabling 2-way communication. We have found that texting people before calling results in a significant increase in successful calls, and it also takes considerably less time for phone bankers to complete these calls compared to the calls they made to people who did not receive a heads-up text.

Use Case: An advocacy group ran a test to see if they would have more success phone banking if they sent a heads up text before attempting to call. They tested this by splitting a targeted list in half, sending one group a heads-up text before calling, and not giving the other group any sort of heads-up before calling.

All in all, they saw a 62% lift when a heads-up text message was sent before a live call attempt.

Not only did they find that texting people before calling resulted in a significant increase in successful calls, it also took considerably less time for phone bankers to complete these calls compared to the calls they made to people who did not receive a heads-up text.

Surveys
To develop a stronger community around your campaign, it’s important to focus on your supporter relationships. One easy way to learn more about your supporters is via surveys. And with P2P texting, you can survey them right on their phones––whether it’s about interest in donating to your campaign, learning more about it, volunteering at an event––you name it. Then, tag supporters in your database based on their responses to help inform any future asks. The better you know your supporters, the more personalized you can make your outreach, which will in turn increase their engagement and involvement with your campaign.

Use Case: A RumbleUp client sent a series of texts over the course of three days, asking people to complete a survey. Each message was personalized with the recipient’s name and included a unique survey link specific to the person it was being sent to. The tone of the message was urgent and informative, letting the recipient know that the survey was confidential and strictly for research purposes. 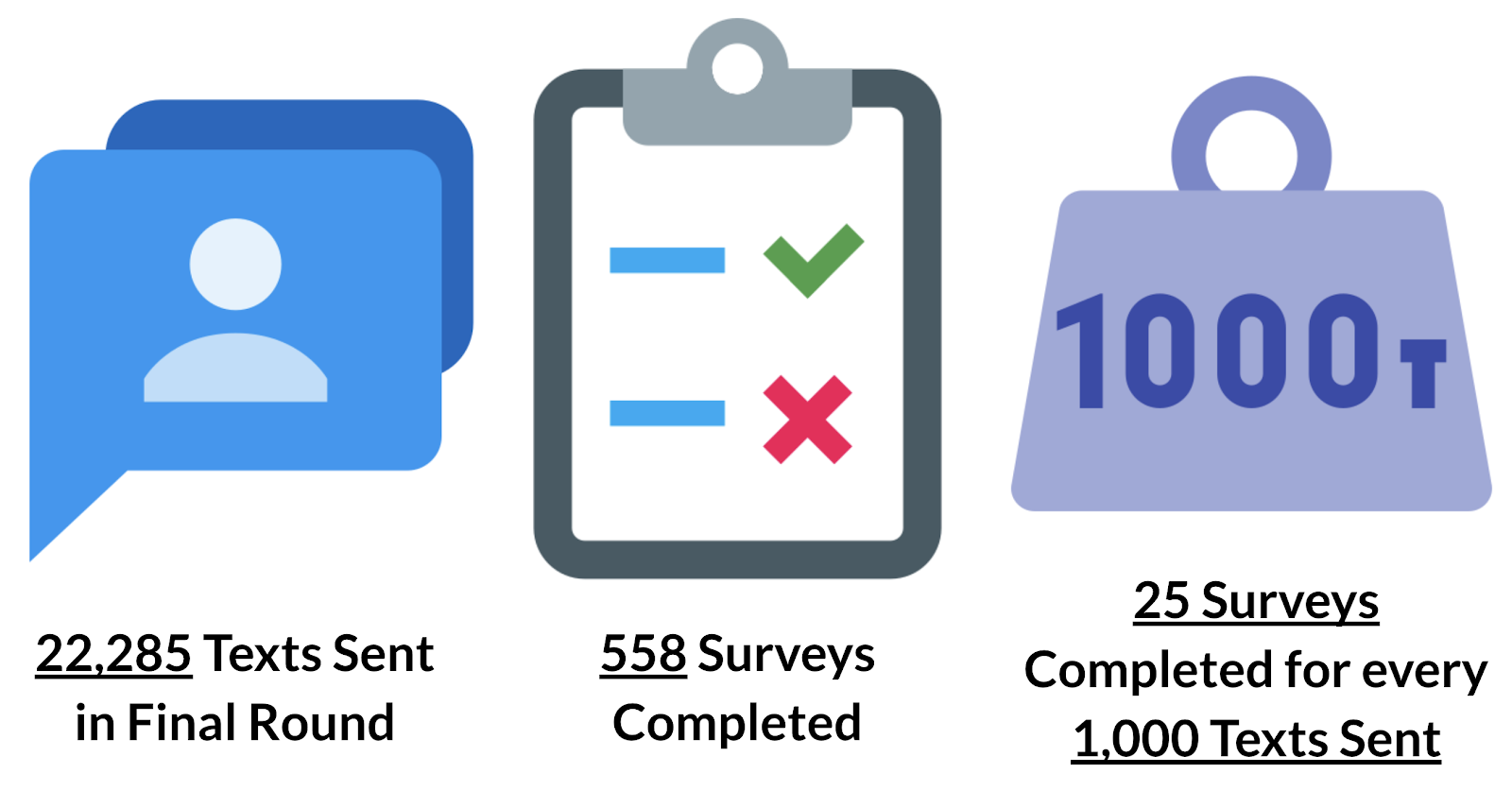 After the final round of texts were sent (22,285) the client had a total of 558 surveys completed. Across all messages sent over the course of this campaign, the client had 25 survey completions for every 1,000 texts sent (2.5%). Texting proved to be both faster and cheaper for this particular client compared to live calling.

Urgency and transparency, combined with repetition and personalization, works. In the few hours it took to send all of these texts out over the course of three days, the client had enough survey completions for a relevant sample size. They ran this same model in three other states and saw similarly high completion rates.

Texting is a dynamic and flexible tool that can be used to enhance any type of outreach effort. People like it because it’s personal, immediate and convenient. Campaigns like it because it works. These use cases barely scratch the surface of the wide variety of successful programs you can run with the help of powerful tools like RumbleUp and NationBuilder, and the list continues to grow.