A victory for the underdog using a smart digital hub

Working with the "long shot" side of a lopsided referendum can be both exciting and terrifying. Success is reliant on an exceptionally organized, grassroots campaign and often times even that isn't good enough. Luckily, it was the perfect challenge for us.

This case study is brought to you by One Persuades - a certified Agency based in Vancouver, Canada. Be sure to visit their website and see their previous NationBuilder work.

The ‘No TransLink Tax’ campaign was the ‘NO’ side in a referendum on a sales tax hike in Metro Vancouver, Canada. Our opposition hoping to approve the tax hike was funded by a $7 million government war chest. Their collective was made up of various groups representing elected officials, political parties, and businesses - as well as labour, environmental and community organizations.

When we started, polls had the ‘YES’ campaign ahead by 13 points. With an extremely limited budget and the odds stacked against us, the digital aspect of our strategy was pivotal to winning the campaign. We were tasked with clearly communicating the message and the ask through the website experience.

The entire campaign narrative was delivered through the 'No Translink Tax' site, as well as centralizing the full path from initial supporter engagement all the way through regular campaign updates. The principal goal of the website was to effectively act as an online base of operations for the whole campaign, to include distributing content and capitalizing on earned media.

It also served as a communications centre, allowing the “NO” campaign to interact with its supporters and canvass for further support and donations. Most importantly, it served as an information hub for first-time visitors, spreading financial truths and allowing the ”NO” campaign to openly challenge the opposition. 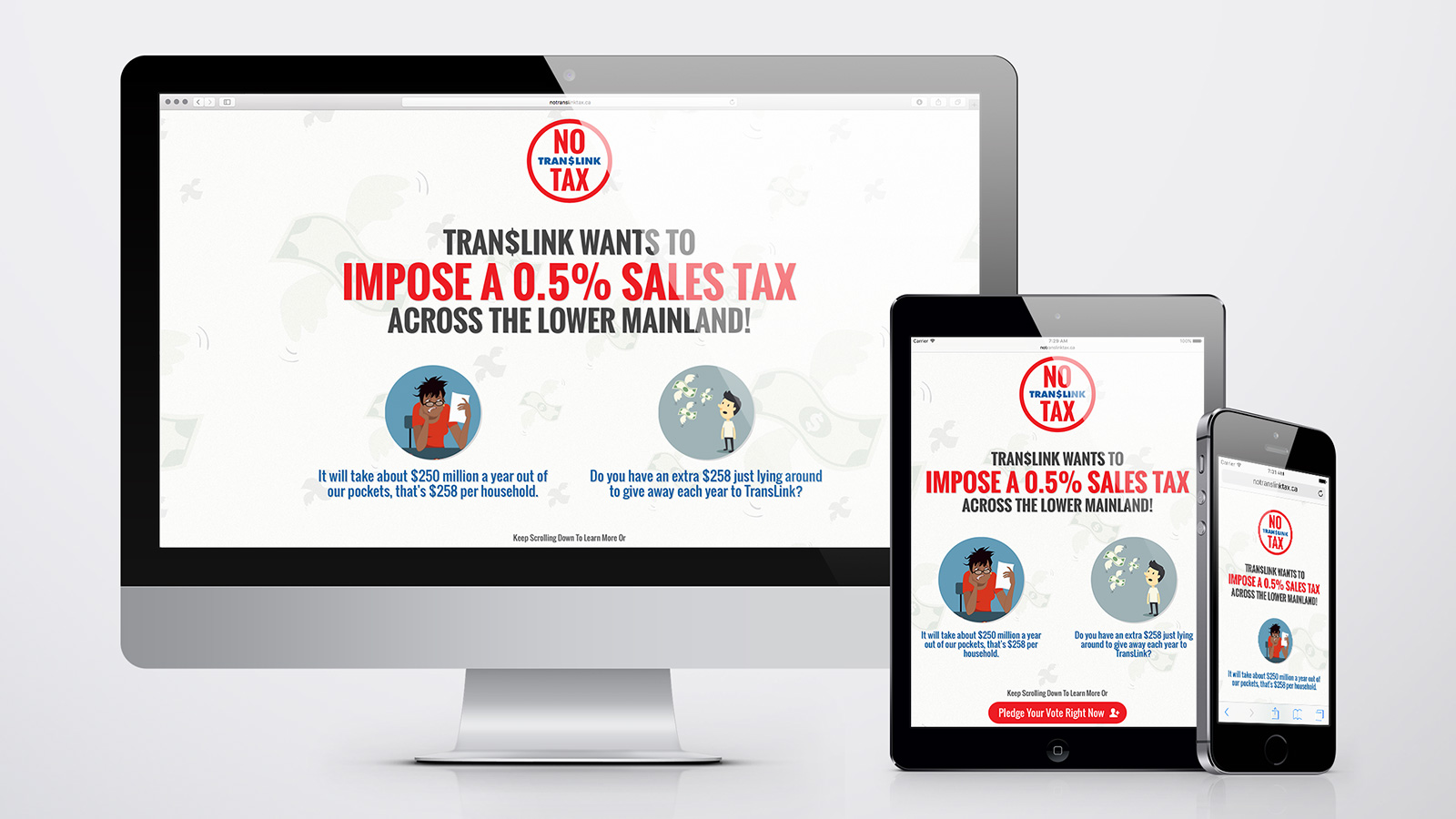 Having NationBuilder as the software provided a perfect combination of excellent data collection, email blasting and fundraising tools. Also being an affordable solution, we had access to advanced advocacy features while still staying within our shoestring budget.

We ended up raising just shy of $40,000 for the campaign. More importantly, the message resonated deeply with ordinary voters that could have been swayed into a 'Yes' vote otherwise. This underlined the value of conveying the narrative of the campaign through engaging design and providing information in a compelling way.

Furthermore, we secured 11,427 pledges to vote ‘No’, and collected over 10,000 email addresses of new supporters who registered through the site. We also activated hundreds of volunteers who recruited other supporters to the cause.

Despite being outspent and starting from 13 points behind, the ‘NO’ campaign won a decisive victory – achieving 62% of the vote. We feel the well-organized and designed NationBuilder site was the catalyst to that victory.

As a testament to the campaign's success, Torch received two Pollie Awards from the American Association of Political Consultants for the website and use of the Internet. We hope to be a prime example that a winning initiative doesn't have to depend on truckloads of financing - relying on the story and organizing supporters around it makes the difference.