This case study was written and provided by NationBuilder partner Tectonica.

The Alliance of Liberals and Democrats for Europe Party (ALDE) works toward building a Europe based on the fundamental liberal principles of liberty, democracy, the rule of law, human rights, tolerance and solidarity. As the party for liberal democrat values in Europe, it believes that only liberal forces can pose a challenge to the rise of extremist and protectionist policies in Europe.

If 2020 has taught us anything, it's that we live in a global community, where international political decisions impact our everyday lives. Despite that, there are few opportunities for those among us to participate at a political level beyond local participation, and even fewer beyond a national level. The Alliance of Liberals and Democrats for Europe Party (ALDE), however, stands out in this context.

As true believers in European internationalism and democratic participation, the party holds the distinction of being the only pan-European party where individual citizens can become members and have a say in the party’s platform and policy work at the European level. The party’s more traditional member involvement methods - through in person meetings and congresses—however, were no longer the place for growth with the realities of 2020 looming. Standing before the party was a huge opportunity to modernise its digital presence and approaches to engagement online in the age of social distancing.

This is the story of our work with ALDE, the third largest pan-European party, in supporting their use of digital organising to more effectively reach party supporters, engage new members, and connect deeply with a community of liberal-minded Europeans through their shared values.

ALDE works toward a Europe where every citizen has access to the liberal principles of liberty, democracy, the rule of law, human rights, tolerance and solidarity. As the party for liberal democrat values in Europe, it believes that liberal forces are best posed to challenge the rise of extremist and protectionist policies in Europe. The importance of their work to mobilise supporters has never been more important.

During the initial ‘discovery’ phase of our work with ALDE we conducted a series of meetings with key members of their digital, communications, and policy teams to uncover the core challenges they faced, the opportunities which were present, and the place where Tectonica’s work could carry the most impact. ALDE’s key opportunity was quite clearly in the role digital could have in growing its individual membership program—both in terms of new members and deeper engagement from current ones—and invigorating support from across Europe.

Cutting through the noise of crisis and rising Euroscepticism and extremism these days is a challenge for any pro-European political effort. The key is connecting policy operations with interested supporters outside of Brussels and at the same time cementing ALDE’s status as a political powerhouse in Europe. This requires reaching above competing calls for participating that are ‘closer to home’ and showing the value of the party in the everyday lives of members. Additionally, as with any pan-European effort, but particularly one who holds the EU so core to its beliefs, there are enormous challenges of reaching across cultural and linguistic diversity of the many nations and communities of Europe.

Beyond creating opportunity for engagement through the Party’s digital presence, ALDE also needed to address its brand challenges, challenges that exist in part because ALDE is different in name than all of its 70 national member parties through which most members have primary contact. ALDE needed to elevate their new visual identity to allow them to bring more people into their party and solidify its reputation as a key player on the European stage.

As our starting place for supporting ALDE’s move towards deeper digital engagement, we began with a new approach to their public-facing digital presence: the party website. The new site was built fully on NationBuilder with a primary purpose of turning interest into engagement and engagement into mobilisation for the party’s objectives. Leveraging ALDE’s relatively new visual identity we implemented a bold design that reflects the true level of enthusiasm that its passionate liberal supporters bring to the party. 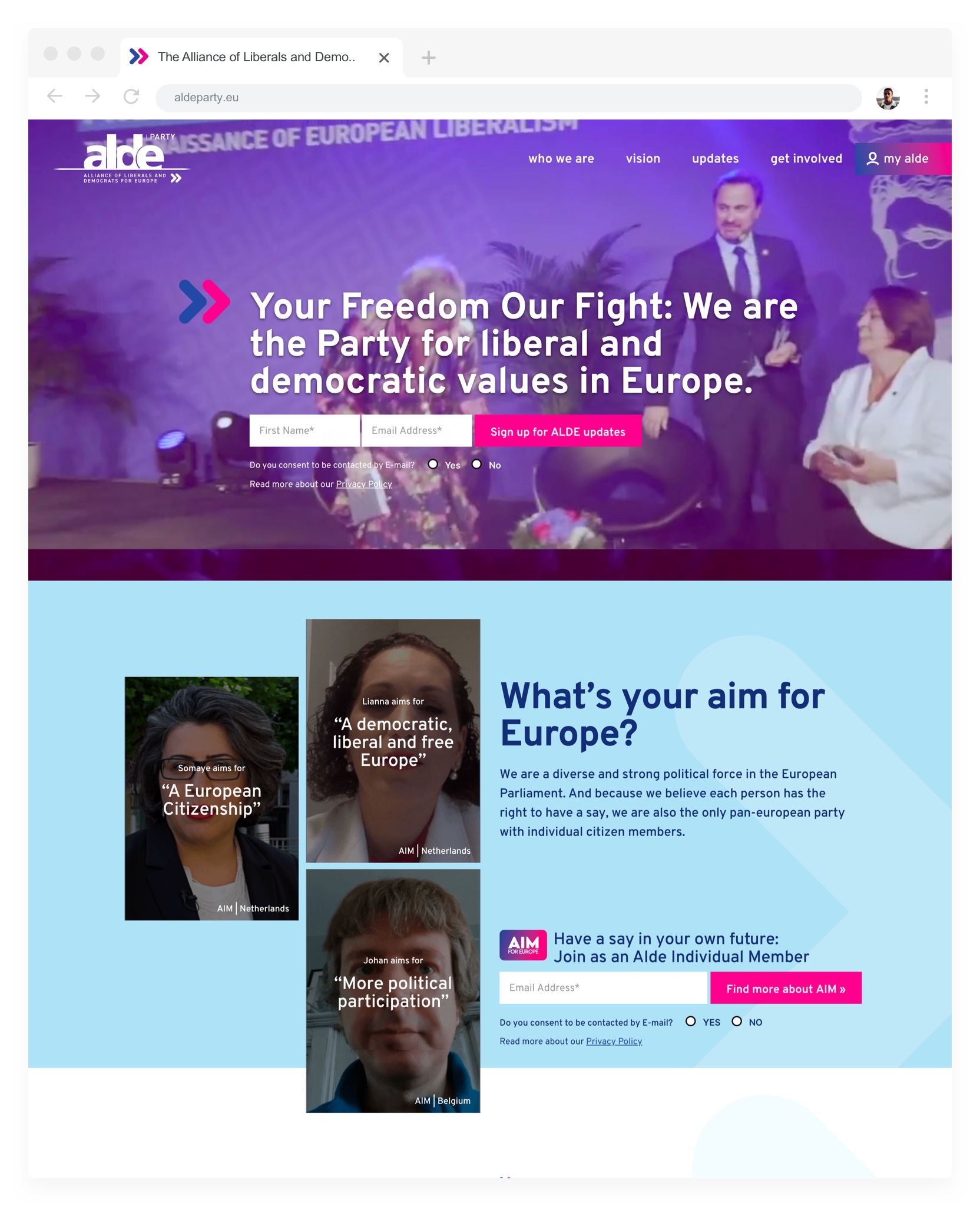 To these ends, we planned a design supporter experience that first addressed why the work of ALDE is important, very directly linked to how supporters can become a part.

This was present in the following overarching narrative:

The easiest way to clearly communicate the role ALDE and cut through any brand confusion is quite simply through its very clear values, which despite a fair diversity of policy opinions across its member parties and individual members are core that unite all involved. Before anything else, these values are clearly shown.

However, it's not simply enough to state values. For them to be truly understood, they must also be shown. We worked to evolve the Party’s visual messaging from institutional images to ones that relate to the underlying meaning in the work of the party. Upon opening the new website the visitor is shown a full video banner with images of supporters marching with large European flags waving, congresses where members gather to debate and vote on policy direction, women working together in the party’s European Women’s Academy, and party leaders charismatically addressing supporters.

At the core of all this, and what truly relays the parties values: their people. From party leaders as real and relatable human beings to individual members to supporters to activists: we were determined to paint a clear picture to any visitor to the site that the party is made up of people who share their passions, motivations, struggles, and aspirations.

In addition to creating a space specifically for members to participate in party actions by bringing current campaigns to the centre of the site, we built the infrastructure and space for “exclusive club” activities, debates, talks, and other engaging member-only activities and built out more prominent donation CTAs and opportunities.

We began by building out a branded program specific to memberships. It was clear that also from a brand perspective, it was important to communicate ALDE’s strong values of supporting individual freedoms, healthy democracies, and a united Europe in all of the Party’s digital efforts front and centre on their site.

A Space for Leadership

We also believed that key to party growth was creating strong infrastructure that party leaders could use to increase their digital presence and allow supporters to connect directly to them.  Party leaders can send campaign emails directly to supporters, and created spaces for leaders to be present within the site’s messaging and communication.

Engagement Through Current Issues and Activism

Members are key to the strength of the party, and as such, we wanted to make sure that ALDE’s new website would be an interactive hub for members to engage in current campaigns, sign and share petitions, sign up for in-person and virtual events, and more. Visitors to the site who sign up to become members can mark their policy area preferences (human rights, foreign affairs, education, agriculture, etc.) to receive specific information from the party about their work in those areas and become more involved, whether it be as a Congressional delegate, Steering Committee member, or by taking part in many of the party’s initiatives. Members also have special access to updates about their country affiliated party so they can become more engaged at things happening at the local level.

ALDE is also deeply committed to creating a Europe where women have equal weight in power, leadership, and decision-making. The new site has a dedicated space for women interested in applying for the European Women’s Academy to support and empower women to take more active roles in European governance.

We’re thrilled about ALDE’s new site and look forward to continuing to work with them to launch campaigns that strengthen their membership program, maximise the impact of their digital engagement and give voice to the party’s activists.