The primary election gets one of the worst raps. Low voter turnout, lack of knowledge, or disinterest among voters — especially when it comes to non-presidential elections.

But where there’s underappreciation there’s opportunity. Or that’s how Sam Gilman saw it anyway.

He considered primary elections the most likely place to influence the conversation and therefore influence the results. So he started Common Sense Action in 2012 to get young people talking about politics in a diverse and encouraging setting. The organization is focused mostly on pushing college students to participate, and in the last few years, CSA has grown significantly. By the end of 2014, CSA had registered more than 3,000 people to vote and the group’s supporter network was growing twice as fast as it had in the first six months of the year.

That didn’t happen overnight. Even though Gilman believed in the idea from the beginning, he struggled to keep CSA supporters connected to the mission and each other. Especially being geographically far away from individuals. So he asked himself a question:

“What is the online platform that can best aid our offline organizing and be a digital home and hub for community and our organizing efforts, particularly given that we are a very low resource effort?” 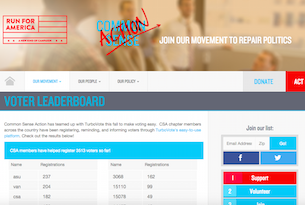 The question led him to NationBuilder. CSA started using the platform to manage its people and track their actions, like who was sharing what and to whom. It was easier to communicate with CSA supporters that way, and it meant chapters were able to grow on their own and in their own way.

CSA also built a virtual leaderboard that showed which chapters were registering the most voters. It updated automatically and encouraged a healthy competition among chapters, which was doubly beneficial. It encouraged the chapters to get more people registered and provided a way for distant groups to feel connected.

A quick lesson on human-to-human interactions.

Gilman likes to tell a story about how he and his co-founder, Andrew Kaplan, discovered the power of personal interactions.

In late September, they were in the throws of getting people registered. They wanted to reach as many people as they could as quickly as possible. So they had one of their supporters tweet to his more than 500,000 Twitter followers a request to register to vote with a link. Not one person signed up.

Compare that to the day before, when Gilman and Kaplan sat down and sent individual messages to their Facebook friends and friends of friends. In two hours, 80 people had registered to vote.

“Our big lesson is that politics are social and they're relational and that really engaging peers and friends and friends of friends is the way to most effectively and efficiently boost turnout," Gilman says. "We shouldn’t have been spending our time courting massive audiences. Instead we should have been spending time organizing our communities.“

Now that they're using NationBuilder, that's even easier. When they want to reach out to someone or a group of specific people, they can send a personalized email. It gets logged in the profiles of each person. They can find not just who has the most followers, but who's already sharing CSA messages and start a conversation with those people.

That's how their group grew so much.

CSA used NationBuilder to leverage a network of supporters to find more.

Having popular or well-known people in the network wasn't the best solution to reaching more people. CSA confirmed that when Gilman and Kaplan sat down and sent direct messages to friends on social media. It's more about identifying the people who already align with the group's goal and then having them help with expansion. That way the messages are genuine and the impact is far greater simply because it's more targeted. .

Instead of using a bullhorn to shout at everyone, you find the perfect speaker whose audience is already listening.

"The moment we realized we needed NationBuilder was when folks were going back to campuses that winter," Gilman says. "We wanted to track the engagement that members got with other people and keep tabs on how they were out promoting and bringing more people into the network."

As CSA really started growing, the founders decided that to accomplish their goal of having a diverse and national conversation, they needed to be widespread. To put it in numbers, that meant they needed chapters in at least 20 states. Today they have 40 chapters in 20 states and Washington, DC.