On Oct. 24, 2014, kids in Detroit sat down in their school cafeterias to lunches of “clean-label” drumsticks. At the same time, Atlanta chefs demonstrated ways of cooking with fresh and nutritious ingredients. While over in Harlem, a group screened the movie “Fe­d Up.” 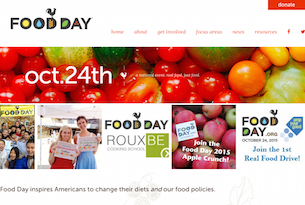 These three events in three cities were part of a larger mission: to bring Americans together to talk about diet, nutrition, and healthy eating. It was Food Day 2014. More than 8,000 individual events were set up from coast to coast -- a 70 percent increase from 2013 that made it the largest annual jump on record.

Food Day began in 2011, with 2,350 events across the country. By 2012, the group had increased the number of events by about 30 percent. As the activities increased, the staff remained small, creating a need for a technology powerful enough to handle the data for each event and each supporter and leading the group to NationBuilder. The platform acted as the infrastructure for organizing the group, enabling the leaders and supporters to focus on growing their day of action.

"Food Day resonates with people because they can use the day however they want -- they can either celebrate or advocate or teach people -- and we're giving them all the resources they need," says Emily Snyder, project coordinator for Food Day. "Our growth has a lot to do with outreach and showing people that they can get involved because the barriers to participation are very low."

How do you stay local yet reach millions?

When Food Day began four years ago, the founders already understood that the events themselves -- getting people together to talk about or experience food with each other -- was where the magic happened. In planning a day of action with a small central staff, the volunteers who want to participate become essential because they carry out the logistics on the local level.

For such an infrastructure to work, Food Day needed to build a system that kept track of who was planning which events and where. And then, those people needed to be supported in their efforts, which meant an organized way of highlighting the most influential people and facilitating their motivations into actions.

In addition, there had to be a way to let attendees discover events on their own.

Food Day used NationBuilder to give people the support they needed to take ownership over events.

First, Food Day used the searchable map feature. All of the events were siphoned into the map, centralizing the data. Here, people interested in attending an activity could find those closest to them and RSVP directly. Those who wanted to host their own could post the details, and no one from Food Day would have to set it up for them.

By enabling volunteers to assemble their own activities, the organization could appeal to local interests as it pushed for changes in individual habits. So as Food Day gained momentum, it still maintained the grassroots energy that kept it running.

But Food Day's leaders took it a step further. They set up their NationBuilder system so that when someone organized an event and posted it on the map, they were automatically tagged as a host. Food Day's carefully planned setup alerted them to who the most influential members of their food community were and gave them a reminder to followup with them.

“NationBuilder allows us to keep organized – and communicate effectively with – thousands of Food Day supporters across the country,” says Lilia Smelkova, campaign manager.

The group used this feature of classifying people with tags throughout their website. They assemble details of what's drawing people in so they can determine what's most effective. Are people downloading the Eat Real Recipe Booklets? Or are they signing up for the newsletter through a splash page or newsletter signon pages?

Those kinds of details help Food Day produce resources that are the most useful for their event creators. Because it's automated, leaders can spend more time reviewing the results instead of gathering the data. That frees up their time to focus on overseeing the organization, planning strategically, and having more conversations with their most involved members.

Now, all of the people who have participated in Food Day 2014 represent possible event creators, policy advocates, and new coordinators for Food Day 2015. With this year’s structure in place, next year’s potential growth is both huge and in reach.