Before the GenUN initiative began in August 2014, it wasn’t as if college students had no interest in international issues. Far from it. Young people all over the U.S. already cared about everything from peace and security to energy and climate change. They were taking foreign policy classes and sharing opinions on the topic through social media.

But as things were, something was noticeably absent. Youth efforts weren't wholly coordinated with the United Nations itself, a worrying sign that the most important organization in international affairs was failing to capture the next generation.

"We realized this sense of urgency about figuring out the ways to engage younger people, and the millennial generation specifically, because they really have an important stake in international affairs," explains Monika Johnson, youth engagement manager for UNA-USA, GenUN's parent program. "We needed a better platform to be able to communicate with them and also a digital strategy to catalyze action."

Recognizing the missing link was only the first step. If Johnson and the rest of UNA-USA really wanted to change their predicament and encourage youth involvement, they needed to mend the link. They needed to build the pathway for college students to go from caring to acting to leading. 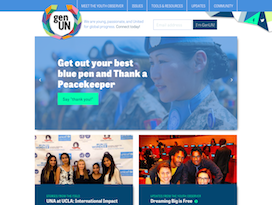 And with a little help from NationBuilder, they did.

The GenUN campaign launched on Aug. 12, 2014, in coordination with International Youth Day. By December 2014 -- five months later -- GenUN had relationships with more than 20,000 supporters and 1,000 volunteers. During that time, those supporters held 28 meetings with their congressional offices at the staff or member level. They organized a contest with the Department of Peacekeeping Operations that sent winners to New York, and they’re making plans to open 10 new chapters.

How do you inspire a feeling to become an action?

For an organization like UNA-USA, there are three elements to building a community and inspiring involvement: education, pathways, and empowerment.

When it comes to motivations for volunteering with nonprofits, an overwhelming majority of millennials say passion for a cause is a primary motivation, according to a 2013 Millennial Impact Report by Achieve and the Case Foundation.

So before GenUN could do anything substantive, Johnson and her fellow leaders, like Renee Traynor, had to get to know the people who cared about international affairs, the people who would make up their community. Using NationBuilder, they built a website that prompted first-time users to self-identify with the issues that most interest them. Did they care about peace and security? Global health? Girls and women? Energy and climate?

That one bit of information became part of an internal profile for every person. When aggregated through NationBuilder, it showed the most popular issues in the GenUN community. And when separated out by individual, it built a more complete picture of who that person was.

As a result, "the level of engagement with our constituency is a lot deeper," says Traynor, who serves as UNA-USA's digital producer.

Personalized profiles also informed the next steps to encourage involvement. For instance, GenUN used that information, along with the location filter and email features on NationBuilder, to identify supporters who cared about family-planning funding and ask them to write to their representatives, who aligned on that issue. The action resonated because it came from people who already cared.

For peace and security issues, GenUN used a campaign to identify potential participants for a contest to meet the head of the UN's peacekeeping operations at a reception in New York. Keeping track of who had participated in the initial Thank UN Peacekeepers program gave GenUN both the ability to craft a more personalized call to action and the confidence that these recipients would be the most likely to follow through.

"A lot of effective grassroots advocacy is understanding what the right ask is for each person," Johnson says. "One of the great things about NationBuilder is it enables us to look at our supporter network in a more aggregated way and then more efficiently move people up our ladder of engagement as a group now that we have data on them."

But the ultimate milestone is making supporters into leaders. Johnson saw that happen with the peacekeeping campaign when more than 300 simple signatures turned into 10 campus events. And she’ll see it again when GenUN’s chapter count goes from 25 to 35.

GenUN's mission to get young people involved in international issues, but in actuality, it doesn’t stop there. The hope is to turn them into future leaders for the UN, and if the momentum they’ve built is any indication, there won’t be a shortage.

"People want to have an impact, and it’s not always clear what the best way is," Johnson says. "It's about equipping them with the tools that they need and then helping them understand how to use the lever of power that they already have."