This case study is brought to you by Tectonica - a certified Agency based in Buenos Aires. Be sure to visit their website and see their previous NationBuilder work.

The first victims of conflict are children. DCI-Palestine documents human rights abuses of children and champions legal remedies for injustices in the Occupied Territories. The organization works tirelessly and in dangerous conditions to improve the everyday lives of Palestinian children.

As the project and our relationship with DCI-Palestine grew we began to appreciate the difficulties of everyday life in Palestine and the importance of humanizing crude numbers. It’s not every client that’s late for a meeting because of a road block or tear gas in the streets. We became more and more determined to deliver the perfect tools that would allow DCI-Palestine to grow as an organization and continue to improve the lives of children.

We decided the best way to bridge the gap between the general public’s knowledge of Palestine and the children’s reality was to document six in-depth accounts of human rights abuse. By relating the children’s stories we wanted to present a sample of real-life accounts and demonstrate how DCI-Palestine’s work is key to impacting change.

Each child’s account was presented as mini-series in a documentary format and would serve as both a record of human rights violations in the region and to galvanize support for DCI-Palestine.

Tectonica carries out extensive groundwork before starting any project. We began with a series of conversations to define the primary goals regarding outreach, engaging supporters, and their core mission of documenting human rights violations and conditions affecting children in the region.

Before starting the first design, we developed an overarching communication plan which provided an in-depth analysis of social, email, press, fundraising and campaign strategy for the organization. The plan provided for the current state of affairs and the projected gains that implementing the new site would win.

The communications plan also set out the many opportunities and challenges faced by DCI-Palestine and the specific role that Tectonica would play in delivering goals. Engaging with the organization on a constant basis allowed us to gather data and set up an objective-based strategy.

The project had a range of goals:

With a large volume of material to present, we took a detailed, structured approach to the overall site design. Once we had the site maps, we created a data matrix listing the content, specific objective, and information required for each page.

We built the site on NationBuilder. Tectonica has been associated with NationBuilder almost since their beginning, and we were the first studio to be certified as NationBuilder Experts, Architects and Developers.

Convincing web visitors of the worthiness of your cause through the website is the first step of a larger goal - to use our best technologies to coordinate the international community to take action on behalf of the children of Palestine. NationBuilder goes miles beyond the world of simple web building and allows complex organizing and communications in and between a community of web users. For almost any Non-Governmental Organization, it is a powerful tool to maximize what the internet can do for the cause.

DCI-Palestine knew that to get the most of its online presence it needed to engage its web visitors at every step - inviting them to go from passive viewers to active participants.

All of the actions taken by users are automatically coordinated, tracked, and integrated through the system’s database. If a supporter donates online, recruits a friend, shares a link on their social media page - all of these actions are tracked and organized in the system’s control panel which the organization can use in an integrated way with their organizational efforts. All of this tied in deeply with social media and e-mail communications to create DCI-Palestine’s own coordinated network of activists and supporters.

In today’s world the diffusion of information requires different technologies and a more dynamic approach to marketing. Ad buys in newspapers, television, radio, and flyers simply do not have the same impact - and cost far more than they should. The public wants businesses and organizations to engage with them in a more personal way and through the same channels where they consume information - social media, web, e-mail and online activities. NationBuilder coordinates all of these as one powerful tool for marketing through community engagement and organizing. For a project like DCI - Palestine this is the foundation for change-making at the international level.

Not the usual project...

Some sites take more time, some less, but most follow a fairly predictable path. When we began working with DCI, the recent Israeli incursion into Gaza, Operation Protective Edge, had not started.

Client calls were occasionally delayed due to the sudden appearance of extra checkpoints between our main contact’s office and home, or tear gas which made the route impassable. DCI staff were busy responding to, and reporting on, military incidents involving children. In July, 2014, the coordinator of DCI’s Community Mobilization Unit was killed by security forces during a demonstration.

The war created new events to document and new stories to present. Our desire was to tell them in ways that are powerful, accurate, and compels viewers to engage. Crafting the narratives led us to new technologies and storytelling techniques. As the project grew in complexity, we adopted new methods for planning and organizing.

Tectonica may be a web design studio, but we take our motto seriously: “Changing the world one pixel at a time.” The situation in the Occupied Territories and Israel is complicated. Regular contact with our client underscored the myriad of ways that the conflict affects children and the urgent importance of DCI’s work.

By the time we were conducting our intensive planning for DCI-Palestine the assault on Gaza was well under way. The whole world was suddenly watching in horror as the attacks decimated infrastructure, communities, and killed children at alarming rates. All eyes were on Palestine and DCI-Palestine specifically was a central resource to the media and the world as to the impact of this war and the occupation on the children of Palestine.

We knew that we simply could not take the time to wait for the full site to be built before running a campaign that would rally the outcry of the international community and demand accountability. With this in mind we built a petition on the NationBuilder system which called on the leaders of the US and the UK to demand the UN support an inquiry into potential war crimes.

At the same time we also saw this as a key opportunity to address one of the underlying communication issues we assessed in DCI: the organization had huge support online, but a very small - albeit dedicated - email list with only two thousand emails.

DCI had a very impressive combined social media presence of over 40,000 fans on Facebook and followers on Twitter. We wanted to help them to leverage this huge level of overwhelming support by transferring this base to email - a means of communication which is far better for real engagement. Once users become supporters, they can be contacted via email which is often more valuable and leads to a higher degree of engagement for petitions, donations, local events and other forms of activism.

Tectonica assisted DCI in revising their marketing campaign, including the goal of converting at least five thousand users to sign up as supporters on their email list. The campaign succeeded beyond all expectations. In the first two weeks, DCI garnered 17,000 signatures. 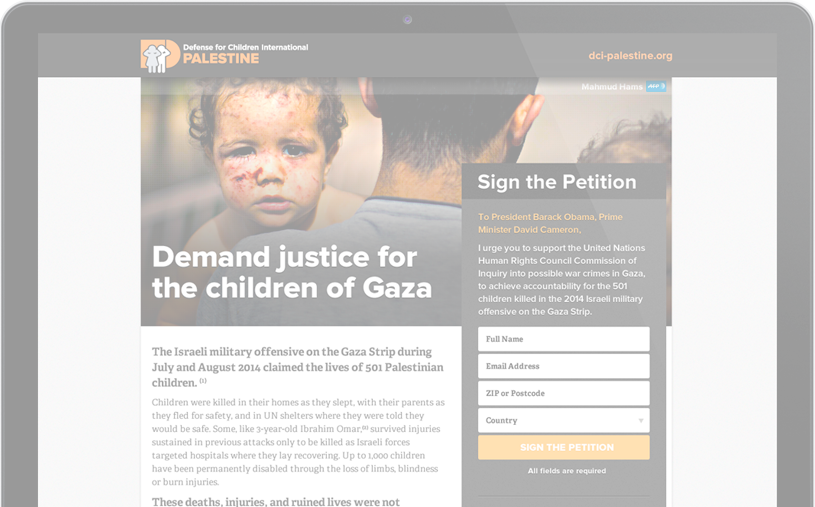 You can see a plethora of shocking statistics. But to be truly compelled to take action one must emotionally understand the human impact of a conflict.

The internet gives us the power to reach across the world and understand the real harm that is coming to others in foreign lands. And in a way that is more than just another tragic event reported in a far away country- from which the reader can be so easily detach themselves. Site visitors need to know they can and must take action. And to impel them to do so we need to see the faces of those impacted, hear their voices and understand their stories as if they were our own.

Along with the main site, we created online documentary stories for six individual narratives.

Tectonica began by defining an artistic direction, and applying an investigative journalism style with dark color palette, typewriter-style typography and corresponding sound. We used a range of media to tell DCI-Palestine’s story, including original video, text and images. We worked around the clock on transitions, timing and incorporating video that would do justice to the truly horrifying daily realities of the protagonists. 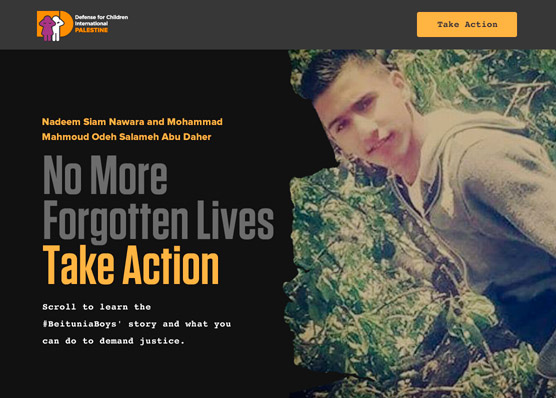 The first story, documenting the shooting of two unarmed teens at a peaceful protest, required weeks of custom coding in javascript. The result is a harrowing depiction of two deaths, DCI’s investigation and forensic analysis, and the case they filed in an Israeli court. As a result of DCI-Palestine’s efforts, Israeli prosecutors brought manslaughter charges against the border policeman allegedly responsible for the death of Nadeem Nawara.

They stories present DCI-Palestine’s main message with a distinctive style and evocative realism that allows people across the world to relate and reflect.

We believe the key to creating a truly unique digital platform is building a unique and lasting relationship with a client. It was a pleasure to work with DCI-Palestine and the trusting relationship that was established allowed us to build an outstanding site. We are thrilled with the result and DCI-Palestine were kind enough to acknowledge our work:

"We found Tectonica's communication, energy, and commitment to be unrivaled. We looking for a hybrid news and nonprofit website --a difficult balance to strike without splitting the focus of our target audience -- and Tectonica rose to the challenge with a design that not only pushed the boundaries of the NationBuilder platform, but also left us floored in their execution."

We feel that one of the most important tools a website can use is storytelling. DCI-Palestine were delighted with our ability to focus on storytelling and develop human stories in order to relate to their diverse audience.

"The interactive stories they created for us took complex information and distilled it into engaging content that compels our online audience to take action."

Every relationship we have with a client is tailored to meet their specific needs. Our focus is solving specific challenges that change with every new client.

"Team Tectonica partnered with us every step of the way: whenever we presented a challenge, they had a solution; whenever we delayed the process, they found ways to make up for lost time. From the moment we picked Tectonica, they never gave us a reason to look back."