The Kramer brothers, co-founders of Meridian Hill Pictures, had been working on two independent film projects for about five years. The first was City of Trees, a feature film following three men affected by a stimulus-funded green-job training program. The other, Kramer & Sons, tells the story of their own family's immigration to the United States and the legacy of the small butcher shop their great-grandfather started in Northeast DC's Union Market.

With Meridian Hill Pictures and through these documentaries, the brothers have worked to bring to life their lifelong passion for nonfiction storytelling. They wanted their production company to both have strong roots in the community and create high-caliber work.

While fundraising had always been a challenge, the Kramers had been getting by on small grants for the first stages. But by the time 2014 was nearing its end, they'd received rejection letters from most major film grants and traditional documentary funders. If they wanted to get their projects finished and distributed, they realized they needed to reach out to their community for help. 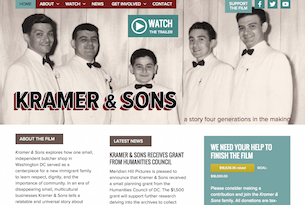 With the first film, City of Trees, they successfully reached their fundraising goal through crowdfunding and learned the importance of one-on-one conversations. Yet organizing and planning personal conversations and keeping track of all of the relevant details had been time-consuming.

So when they decided to seek funding for Kramer & Sons, they applied the lessons they learned about organizational infrastructure with the City of Trees fundraising campaign. With a little help, they replicated the custom website and set up a donation page on NationBuilder, then targeted their outreach efforts to the 50 people they calculated as the most likely to contribute.

That project reached its goal in less than two weeks.

“When you’re working as an independent documentary filmmaker, you have to get your head around not just how to make a great film, but also how to identify and build your audience. Then you need to figure out how your film can reach those people,” says Lance Kramer, executive director of Meridian Hill Pictures.

How do you make your fundraising meaningful while being mindful of your calendar?

Inevitably, smaller companies face a challenge of balancing their time organizing their development, distribution, and outreach efforts with their actual filmmaking. Meridian Hill Pictures was no different.

These two films were the reason the filmmakers started their production company. But because it was small, neither Lance nor his brother Brandon had the time to sift through hundreds of business cards and email contacts amassed over the past five years, let alone put them into a structured, catalogued communications system.

So with City of Trees, that task fell to Alison Buki, the communications and outreach manager, and Lindsay Davis, the studio's development manager.

And while Meridian Hill Pictures exceeded its fundraising goal for that film, much of the work maintaining outreach efforts and staying organized took up the majority of their day.

The production company transitioned its database over to NationBuilder, which made it easier to launch individualized campaigns for specific projects, such as Kramer & Sons.

Meridian Hill Pictures duplicated its City of Trees website, which had been built on NationBuilder, and set up a donation page on that site. Because the infrastructure had been built and everything had already been input to the NationBuilder platform, all the contacts, potential supporters, and interactions were already logged and organized. Rather than starting from scratch after the City of Trees campaign, the Kramers could dive right into fundraising and begin having conversations with potential supporters immediately. As a result, they built the site and raised more than $18,000 in two weeks.

"What we were able to do is transfer all of our contacts and put our network in NationBuilder, and come up with an internal tracking system that allows us to effectively manage who we reached out to, who donated, who said they would share the campaign," Buki explains. "We had a lot of stuff that was everywhere in spreadsheets before. The transition to NationBuilder made my job and time more effective."

Buki didn't have to constantly remind the Kramers with sticky note or emails. She set everything up on NationBuilder and let the automated reminders for follow-ups and the tracking tags do the job for her. That freed up a lot more time to focus on strategy and still manage everything so that the Kramers could focus on their person-to-person interactions with potential supporters.

With NationBuilder, all the information was in the system, updated, and organized. Lance and Brandon were able to log in any time and feel up-to-date and on task.

The Kramers had feared fundraising might feel impersonal -- a big concern for a production company with a community-focused mission. But because the contribution requests were personal and came from the Kramers themselves, the process created another way to strengthen the bonds between community members and the filmmakers.

"We were so reluctant to ask for help or support or assistance from our community because we didn't want to burden them. In fact it was the complete opposite," Kramer says. "Launching these two campaigns unleashed a groundswell of grassroots support that was waiting there all this time. NationBuilder helped us to invite people into the filmmaking and outreach process through different pathways. The impact has been game-changing."