The internet makes it possible for anyone to publish a petition and spread it on social media, but there’s a big difference between just publishing a petition and actually organizing a successful petition campaign. The critical distinction is that the organizing approach harnesses rich engagement data about your leaders (who’s sharing the petition; who’s recruiting peers to sign it) to drive more action from more people.

Practiced by trailblazing campaigns and change-making movements, organizing is the most efficient way to grow your supporter base. It runs on people power. Instead of telling everyone en masse to take the same action, you’re raising a cohort of supporters to be leaders. In turn, they’ll recruit their own networks. Picture a snowflake that spreads further outward and outward.

What's the goal of your petition?

I want to influence a decision:
The workhorse of petitions.

I want to fire up my base:
Many petitions aren’t directed at any specific decision or decision maker. Instead they’re fundamentally expressive. Leaders use them to reconnect supporters with the mission.

I want to rapidly grow my base:
More and more organizations across diverse sectors are using the petition format and approach (not necessarily the word itself for the sole purpose of reaching new supporters at a scale and speed not attainable through traditional group signup forms. Petitions yield incredible valuable data because people are expressing a value-based affinity for your organization’s project or overall mission. Research on successful mass movements shows that shared values fuel growth far and above purely demographic factors.

Your petition's call to action

Use this checklist to cross-examine your call to action:

Now it’s time to decide what information you need to collect from petition signers. Since “need” is the operative word, begin with what’s absolutely vital. Remember, shorter petitions get more signatures. Each additional field you’re asking signees to fill out creates a barrier. At the same time, you want to ensure that you have all the information you need to guide your supporters to take the next step.

Most petitions ask for:

Some additional fields to consider:

Make the most of social recruiting

The moment of petition signing is a powerful act. People who sign a petition are expressing their affinity for the shared vision of a larger community. In other words, a signature is the very beginning of the journey. Every petition campaign should aim to seamlessly sequence the following steps:

Here's another look at this sequence: 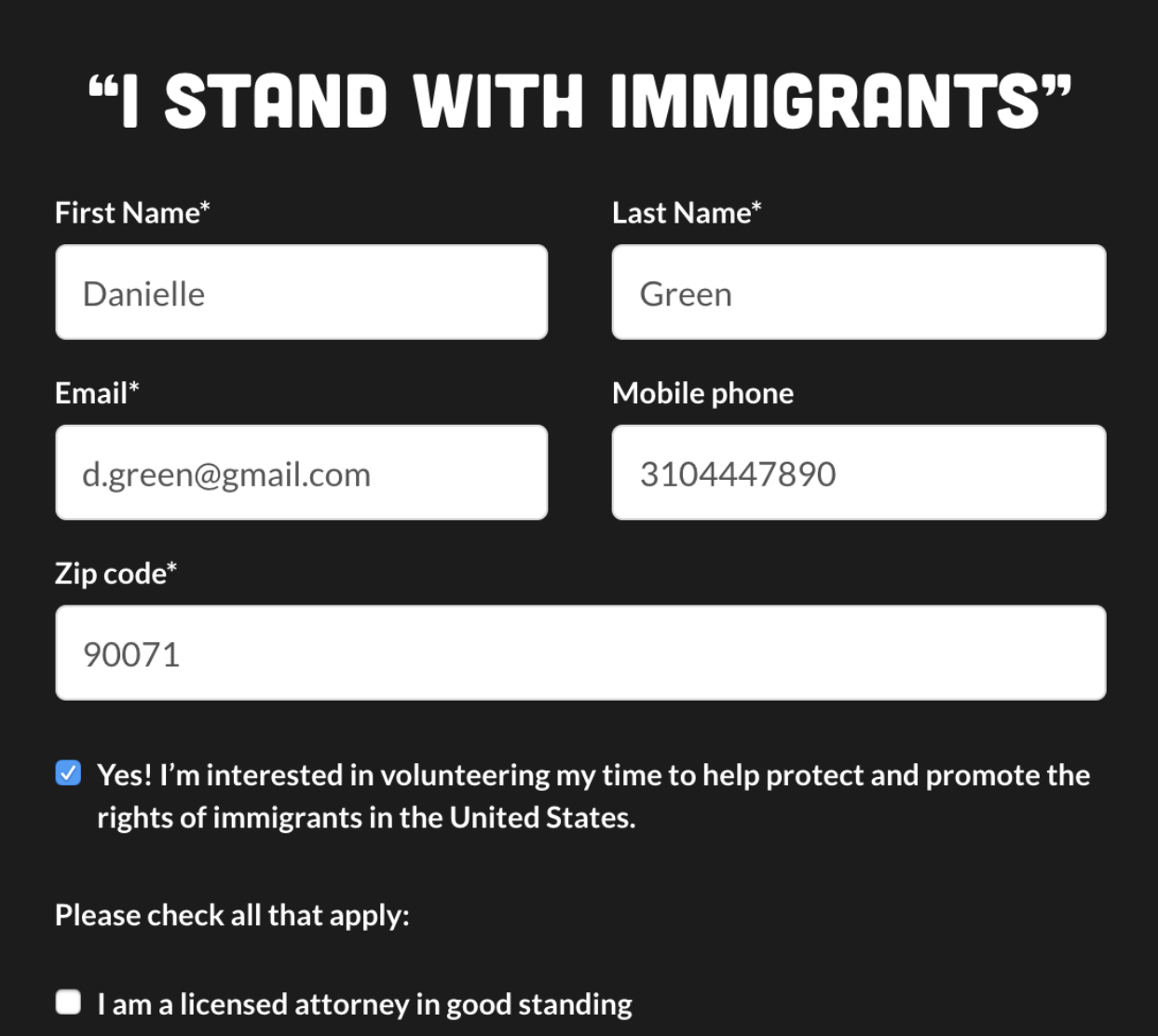 2. After her adding her signature, Danielle lands on a screen that prompts her to share her support for the petition on social media. 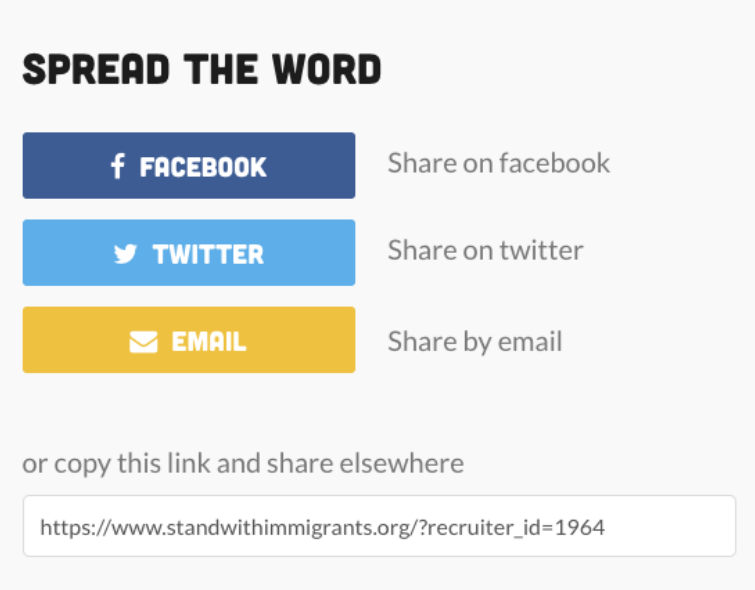 3. Danielle is then invited to take the next step––in this case, participating in more engagement actions in order to take her profile from 60% to 100%.

Why is this sequence so critical?

The single largest challenge in a petition campaign isn’t getting people to sign—it’s getting people who sign to take the next step. Following the above sequence will significantly increase your rate of conversion from signature to social share and from supporter to recruiter. Peer-to-peer efforts replicate this sequence on a huge scale. People are most likely to sign a petition when they see friends signing, too. Tracking is the other reason this sequence is so critical. You don’t just want to be collecting data on who’s signing. You want data that will help you rapidly grow—data on who’s sharing, who’s recruiting, and who’s best at recruiting.

So much ink spilled on “gamification” misses the whole point of using a social capital or currency system: it’s an elegant way to track engagement. It doesn’t need to be complicated—just decide on how many points someone should get for sharing the petition and recruiting peers.

Now you’re going to create a leaderboard that highlights supporters with the most social capital (eg. your top recruiters). Use it to keep track of campaign leaders and recognize them publicly.

Publish a page to lay it all out:

This signup or volunteer page should accomplish 3 things: (1) Clearly describe what you’re asking recruiters to do (2) Stir up excitement about the reward—anything from a shoutout to a free widget to an exclusive event invite; (3) Feature your leaderboard.

2. Elevate your leaders and influencers to grow the petition’s reach

Start with an inventory:

Comprehensive. Data-Driven. Easy. Those are the three things to aim for in doing an inventory of your leaders and influencers. Leaders are your petition’s recruiters. Influencers are people who support your petition and have large audiences of their own. You might already have a low-fi way of identifying them, but with so many different channels of engagement and the internet’s scale, most organizations have hundreds of “hidden” leaders and influencers.

You might have some influencers in your audience who’d make ideal Social Media Ambassadors. Certain leaders have powerful stories to share; create opportunities for them to do so online and offline. Consider one influencer who might agree to be a Guest Broadcaster—the “voice” of your organization for the duration of a specific engagement campaign. Calls to action sent via influencers can get as much as four times the conversion rate of emails sent directly from "Your Organization's Name."

Equip them with resources:

You’ve got to make it exceedingly simple for your petition’s leaders and influencers to do what you’re asking them to do. Anyone who’s helping your organization as a recruiter should have a unique recruiter link that will seamlessly track their progress (more on the next page!). For Social Media Ambassadors, set up a click-to-tweet page that you routinely circulate. For Guest Broadcasters, spearhead email copy and scheduling so that your influencers can just give the green light.

3. Micro-target to attract new influencers to your petition

Some of the most successful digital petition campaigns in the world use a simple but highly effective method. It begins by identifying several Twitter handles that are followed by people who are likely to support your petition. With NationBuilder, you can easily import the followers of any Twitter handle into your database.

Drill down to prioritize:

Maybe you've just imported 10,000 Twitter followers. Now you want to narrow the pool to find cohorts among them who meet certain criteria—people who have significant audience reach, social sway, and affinity for your mission. For example, you might target followers of @climatechange and @environment and @greenparty to find everyone with over 1000 followers and the word “student” in their Twitter bio. “Follow” their Twitter accounts, see who follows back, and invite these new influencers to help spread your petition!

Ready to make it happen?

Customers around the world use NationBuilder’s software to launch petitions, grow their supporter communities, and drive action on a massive scale.

NationBuilder gives you everything you need to organize a successful petition campaign:

Start your free 14-day trial now, or register for an upcoming software demo to learn more.