As an organization founded more than 50 years ago, the Peace Corps values a traditional means of promotion and recruitment: word of mouth.

Someone like Chris Robinson, who volunteered in Jamaica from 2007 to 2009, helps with that goal. He’s one of 220,000 Peace Corps alumni, or Returned Peace Corps volunteers, who can promote the organization by sharing his experience abroad. And that's part of the mission of RPCV/W.

These Peace Corps alumni are passionate about service, and they understand the importance of connecting through stories — whether that means connecting to other alumni or future volunteers. Yet membership growth at RPCV/W had been stagnant for about a decade. 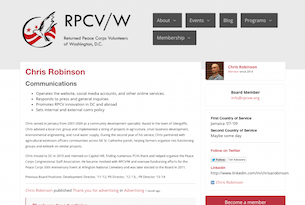 So the group decided to rebrand. On the NationBuilder platform, RPCV/W outfitted members with the tools to plan their own get-togethers, contribute to the blog, and build more extensive profiles.

What followed was an impressive turnaround: more than 1,700 members in 2015, the most in at least 11 years. RPCV/W members also became more engaged online and in person, with the second-highest number of attendees at the annual party in 2014.

“It’s that whole idea of getting your community to build around your mission and create this self-sustaining ecosystem,” says Robinson, the chapter’s communications director of RPCV/W's board. “With the alumni groups, the goal is to talk about your experience for the rest of your life. Raising awareness of the program and showing the vitality of the community — that’s what we do.”

How do you use social media to build real relationships?

Almost every organization and campaign needs a social media plan. In the case of RPCV/W, it was the key to enacting a larger communications strategy.

Although it had a website, most of the activity was happening organically on the Facebook group page. There was a database of members for the website, another one for Facebook users and another one for event RSVPs.

That works if you’re willing to spend hours cross-referencing the different sets of data. But it won’t build dynamic profiles as time goes on and members take more actions. It’s a Sisyphean task with little reward, and RPCV/W leaders wanted to focus on larger plans, like creating a mentoring program and encouraging members to lead events and initiatives.

"We wanted tools and techniques that would facilitate that and that weren't centrally managed, that anybody could add to and take from and connect through," Robinson says.

RPCV/W used NationBuilder to funnel all actions into one platform and give people opportunities to create.

The group joined NationBuilder in August 2013 and used the software to aggregate all its online activity — RSVPs to events, comments, shares, email interactions. Even if a member RSVPed via the Facebook page, for instance, it showed up on their activity and was synched on the NationBuilder platform. At the same time, members were enabled to post blogs and create their own events.

With everything in one place, RPCV/W leaders could see which events were most popular and who was participating the most. They could tweak and tailor events, the website, and communications to match preferences. 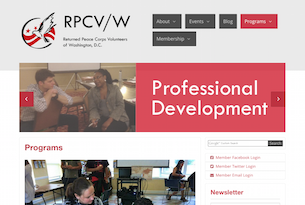 The efforts started to show results when traffic on the website picked up. Overall activity climbed 10 percent, compared to the old site. Members were also opening more emails -- the rate rose to 40 percent from 34 percent in 2013. And with those more than 1,700 members, growth was back on track.

When people are allowed to participate in the decisions and the message of their organization, it’s mutually beneficial. It means less responsibility at the top and more engagement throughout, and for RCPV/W, it meant the group could better execute its mission to share stories.

“We’re all about empowering folks who want to step up and do something and giving them the tools to do it,” Robinson says. “A lot of people aren't really quite sure if they want to, but once you give them a process, people will come out of the woodwork to help out.”