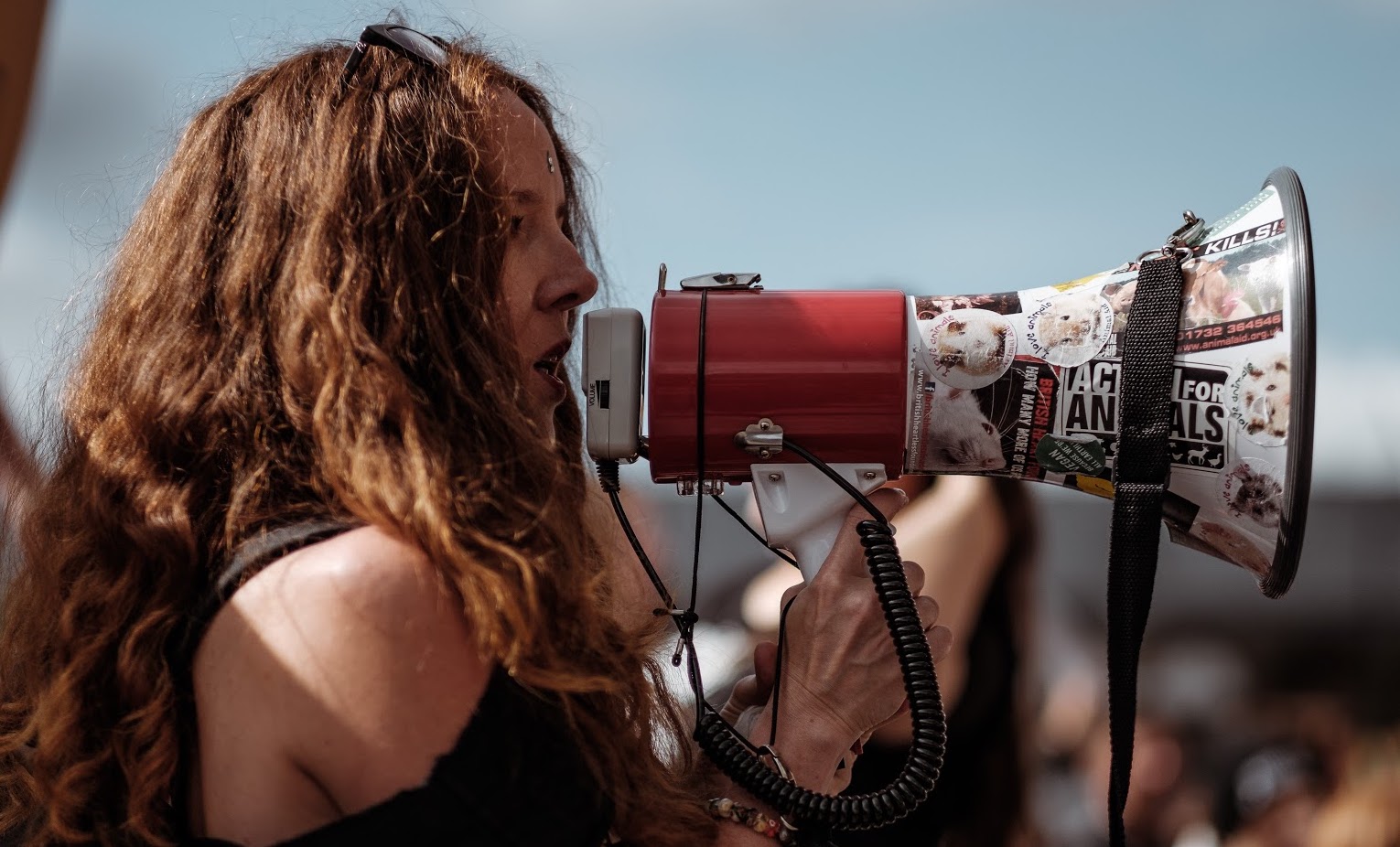 In 1972 Congresswoman Shirley Chisholm made history.

She reached for the highest public office in this country by running for President and was also the first woman Democrat to seek her party’s nomination for President. Breaking through barriers was nothing new for Congresswoman Chisholm, as she was also the first African American woman to be elected to Congress. This was not a symbolic campaign, although many treated it that way—Congresswoman Chisholm’s effort was sincere and was met with racism, sexism, and even death threats. Her campaign was launched in a Baptist church in her own congressional district in Brooklyn, and although she did not win her party’s nomination, her leadership and courage reverberates to this day.

The challenge that Congresswoman Chisholm saw and boldly took on was an imbalance in leadership—between those who hold office and the people that they represent.

It has been forty-six years since Congresswoman Chisholm made her run for president, and although many things have changed, they simply have not changed enough. A quick scan of the United States Congress and Senate shows a legislature that still lacks women and people of color as representatives, and the same goes for our State Legislatures and many of our cities. To have a democracy that reflects the diversity of our nation we need more diverse candidates running and winning elections. But, there is still a crisis in the pipeline of leadership from grassroots to the highest levels of office, and if there is one thing we are obsessed about more than anything at NationBuilder, it’s removing barriers to leadership.

It was out of that commitment to removing barriers, particularly in the political arena, that NationBuilder publicly launched RunForOffice.org in 2016. Run for Office (RFO) is a database that paints a picture of the entire landscape of elections in the United States. Built through painstaking research, RFO provides critical information on what you can run for, how to get on the ballot, and when you need to file for office.

RFO is the first database of its kind. Creating a directory of down ballot races, that include local municipalities, school boards, and special elections, is a difficult and daunting task. Information about elections is not consistent state to state, or even county to county. Through years of data collection, the RFO site currently hosts all federal, state executive, state legislative, county, and school board positions in the United States—approximately 145,000 positions. We built the database to be searchable by address, so anyone, anywhere can access their information. We are continuing our efforts to keep the data “fresh,” which takes an incredible amount of time and human energy.

In the highly collaborative process of building and maintaining Run For Office, we’ve gained vital insights with the help of volunteers, university interns, and partnerships with like-minded organizations. In the summer of 2018 we had the opportunity to work with a group called Data for Democracy on a deep analysis of elected officeholders in one particular state: Louisiana.

We researched every single office and election held in the state from 2014 – 2016, painstakingly documenting everything from school boards to the Senate. We also tracked the candidates that ran and won their elections. This was no small feat as Louisiana has over 4,000 elected positions.

We first investigated how the female population of the state was represented in Louisiana public offices. In a state composed of 51.1% women, we found that only 23% of public offices in Louisiana were held by women. Although we discovered that women running won elections at roughly the same rate as men, we saw that men filed to run at three times the rate as women. Basically, men put their hat in the ring more than women, yet women won at the same rate as men. It’s no wonder that men dominate the public office space given this disparity in the filing— and this example perfectly illuminates the pipeline crisis for public office leadership. 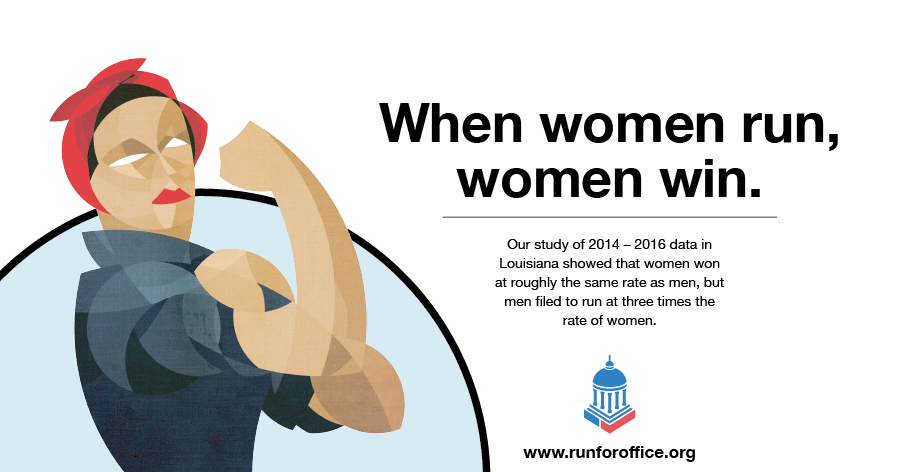 Across the country, we saw similar patterns. As we looked at over 70,000 elected school board positions we found that over 60% of school board members were men. Next, we analyzed officeholder information for all of our country’s over 30,000 county level elected positions, and the disparity was even greater, with 80% of county positions being held by men. Although county positions do not get the attention of state or federal positions, they hold crucial roles in our community. Our Sheriffs, County Commissioners, District Attorneys, County Assessors, and County Clerks are key decision makers in our county criminal justice systems, election administrations, zoning of county lands, and other public institutions that can have enormous impacts on the day-to-day lives of county residents.

Addressing this systemic underrepresentation requires a willingness to acknowledge the gap and a heightened attention to recruitment efforts for candidates that are representative of the communities they serve. The disparities are great, but the opportunities for change are great too. We’ve never lived in a time when people were more connected and energized to change the political landscape. Recent elections have featured young people showing up in numbers greater than at any time before. We have thirty-five new women elected to the House of Representatives in 2018—most of them with long careers of public service that began on their city council, school board, fire district, or other local office. This trajectory must continue. We need more women running for elected positions. We need more people of color holding public offices. There’s work do, but we continue to be inspired by pioneering leaders like Congresswoman Chisholm, and hold to the unwavering belief that anyone can lead.

If accessibility of information about running for office is a potential barrier to leadership, we want to help remove that obstacle. We need the wave of new faces and voices entering the political arena to continue, and for anyone to be able to choose to run, and win.

As we look ahead to 2019 and 2020, it’s more critical than ever to support a pipeline of leadership that is as diverse as the nation itself. These next years hold great opportunity to elect new leaders from historically underrepresented backgrounds. Although there are no planned federal races in 2019 and only a handful of states hold state-level elections, there are over 30,000 contests that will happen in the coming year, most at the local level. Local offices are where most elected officials begin to serve, and also where campaign staffers begin their careers as managers, interns, or policy advisors, so we need more diversity in both elected officials and their staff members.

The author Toni Morrison has said, “If there is a book that you want to read, but it hasn’t been written yet, you must be the one to write it.” This is the year when many people will consider running for 2020, and RFO will be there to help them take the first step. The tools to run are more accessible than ever, so we invite you to recruit, run, and support one another in choosing to lead.

Cristina Pacheco is the VP of Organizing at NationBuilder. Prior to joining NationBuilder, Cristina worked as a producer and consultant at the intersection of arts, social justice, and civic engagement. Cristina has worked with local, state, and national organizations to advance and scale movements and advocacy campaigns. Previously, she served as the Director of Programs at Arts for LA where she trained and activated hundreds of community arts advocates. She currently serves as a board member for The Underground Museum and Get Lit - Words Ignite based in Los Angeles.