This is a guest post by Adriel Hampton, former VP of Business Development at NationBuilder, and a growth consultant for Accurate Append through his digital consulting firm, AHG.

Thinking strategically about data and moving your contacts to greater levels of engagement is the key to successful campaigns with NationBuilder. Just a small number of influential and passionate supporters can bring tremendous success to your organizing efforts. For example, in one NationBuilder campaign for a large brand, we found that just 10 people out of 7,500 supporter targets were responsible for nearly half of the referral visits to campaign pages. Identifying these “super supporters” and rewarding and empowering them can be the difference that tips a close campaign into a win.

The first step to organizing a campaign is starting with a good data set. There are three things every NationBuilder campaign should do right off the bat: download NationBuilder’s free voter file; import personal contact lists; and, use Accurate Append for data enhancements.

One you have a solid data foundation, here are six key strategies you can use to grow your supporter base and turn more supporters into evangelists:

Clean your email list: To successfully deliver more emails to prospect and supporter inboxes, you want to avoid the ire of internet service providers by making sure that you’re sending only to valid emails. Because folks often change their email address, even personal contact lists can be really old and out of date. And voter-file supplied emails can be even worse (in states like California where voters often leave an email with their registrations). Gmail domains are often more reliable – in one recent campaign, we found that nearly 70% of Gmail users opened our first email, nearly twice as many as opened from non-Gmail domains. Accurate Append can verify which of your email addresses are valid, and fill in the gaps where your contacts are incomplete or out of date. When sending from NationBuilder, we like to use NationBuilder’s own “@yourslug.emailnb.com” addresses and we consistently get really good delivery rates – be sure to turn on “receive emails” in your settings to get all replies right in your nation’s activity stream.

Create Facebook Custom Audiences for Advertising: Using NationBuilder’s filters, narrow down the voter list to your top targets – perhaps for a primary election, that will be partisan voters with reliable vote history. If you’ve appended phone numbers and emails, you can then export that list and load it into Facebook to create a laser-targeted custom audience. A matched list of actual voters (you’ll need email or phone for matches) is going to be much better for your advertising than trying to match based on likes or some other less specific criteria. Brad Marston of political consulting group FourTier Strategies recently worked with us to append 25,000 emails to a primary target list and matched 18,000 of those as a custom audience in Facebook. “Our cost per click (CPC) has dropped significantly,” Brad said. “We got a notification in FB Ads Manager that our current ad campaign has a lower CPC than 99% of similar ads.” Use that Facebook advertising to drive voter prospects to key actions on your NationBuilder website, such as signup, donation and volunteer pages. You can do an email append or phone append to specific lists from NationBuilder automatically using Accurate Append’s NationBuilder app for your Facebook targeting.

Take Advantage of Social Media Matches: If you have an email for a voter, NationBuilder will automatically append Twitter, Facebook and LinkedIn information. We recently used this information to learn more about San Francisco’s “social voters” and went on to recruit more than 500 SF voters who wanted to share information about local elections through their social media feeds. Using NationBuilder filters, you can target an email to voters you know have a Twitter or Facebook account and ask them to opt into becoming social media ambassadors for your campaign. 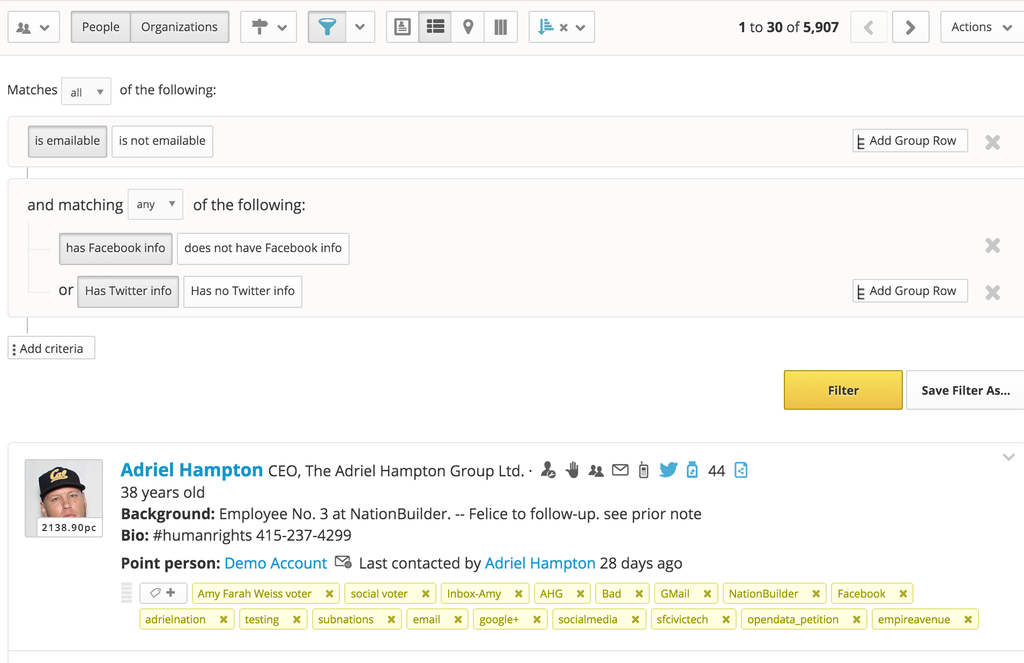 Create a Rapid Response Team: What if every time a journalist covered your race, their article was filled with supportive comments about your campaign and positions? Using email and volunteer pages, you can easily create a base of rapid response volunteers who will share their thoughts about your campaign on all blog posts or mainstream media coverage of the race, and share your best content widely on Facebook. Make these supporters a key part of your campaign by hosting regular conference calls to get their thoughts and update them on your media strategy. I used this strategy in my own dark horse campaign for Congress, gaining credibility with the journalists covering the race and earning free media in the process. With NationBuilder, it’s easy to create an email list specific to this group of volunteers, or you could even text them all as a group to reach them quickly and efficiently.

Consider Micro Donation Asks: Pretty remarkable how Bernie Sanders on a monthly basis can draw in more money than candidates taking large donations, isn’t it? The strategy of asking donors for just a little bit of cash and coming back for more over and over again is a proven sales strategy – it’s called “micro commitments.” When you go out to start raising money for your campaign through email, think about how to use micro commitments yourself. Make your first email an introduction to the campaign instead of a fundraising ask (you’ll get less unsubscribes), then follow up with an ask for $5. Anyone who donates is ripe for future asks, and you can also flag these donors for phone calls during your fundraising call time. 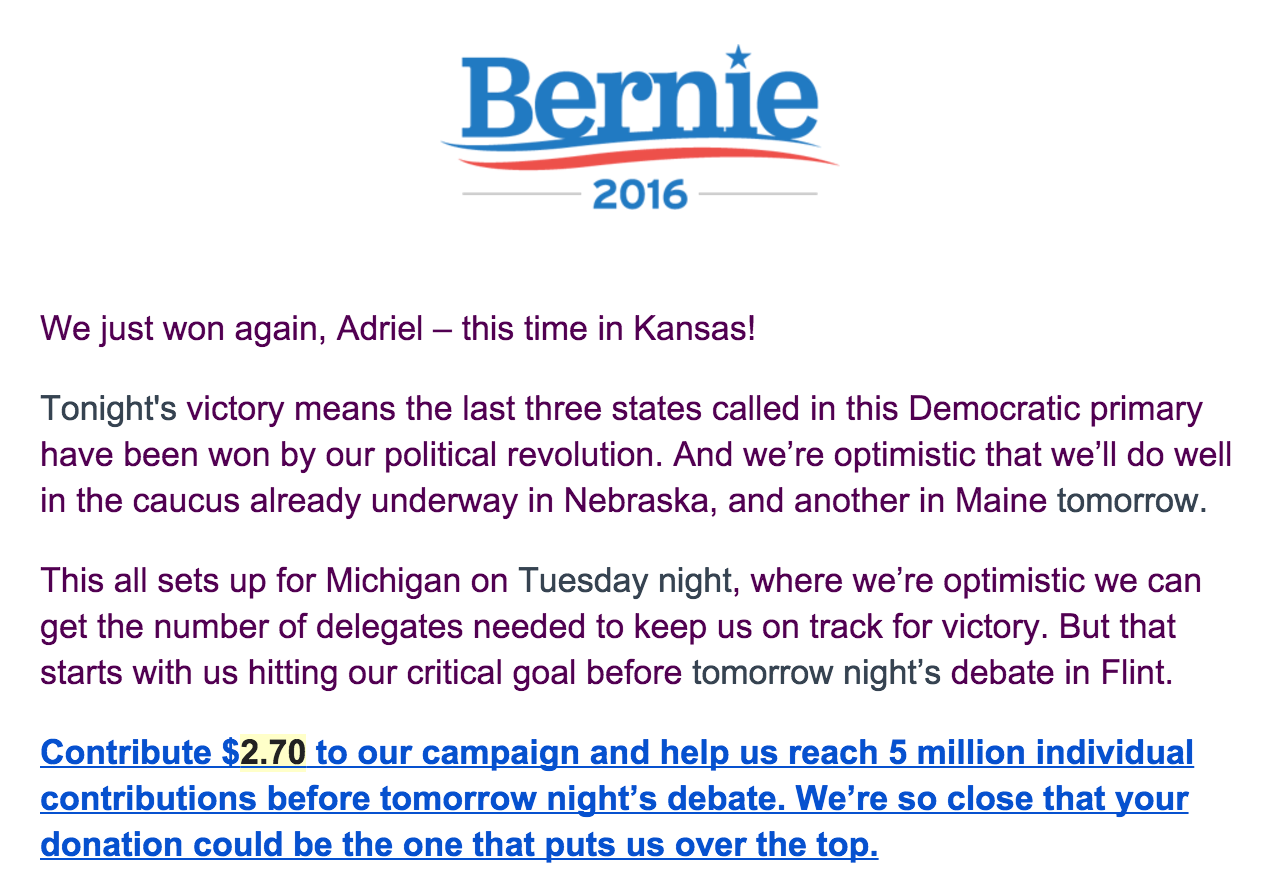 Use Cell Phones to Reach More Voters: Text messages are much more effective than email messages. In fact, texts have a staggering 98% open rate. Campaigns can use texting to their advantage with NationBuilder’s blast testing and several new text-organizing apps specifically for political organizing (while I was writing this, I got my first text from a Bernie organizer alerting me to a local phone banking opportunity). Accurate Append can identify your phone numbers by line type, and fill in the gaps where you’re missing cells. Remember, robo calls aren’t allowed for cells, so line-typing and using live volunteers to text your voters is the path to victory for reaching mobile voters.