Get major results from your donation page with 4 small changes

In 2020, organizations in more than 100 countries used NationBuilder to raise over $350 million worldwide. In the course of their fundraising efforts, our customers spent thousands of hours creating and tweaking every combination of color, font, and word choice on their fundraising emails and web pages. Based on a lot of aggregated data from organizations of all stripes, we’ve identified some key trends and tactics that can help you optimize your digital fundraising pages to give you better returns throughout the year.

It’s a setting that’s often treated as an afterthought: which donation amounts should you include in your forms? Should you list 2 or 10 suggested options? Should you try to cover a wide range of amounts, from $1 to $2,500, or a narrow range, from $10-$50? How much do these choices matter for first-time donors vs. returning donors?

We looked at data from millions of anonymized donations and found that there actually is a right answer.

People love options, but too many can lead to cognitive overload. Most donation pages offered between 1 and 6 donation choices (plus an “other” option where donors can manually enter any amount). The optimal number of suggested dollar amounts, based on average dollars raised, was 3 or 4 default donation options, in addition to an “other” field. As shown below, pages with 3 or 4 default options actually performed better by a significant margin, suggesting that this is an easy change that will have a big impact. 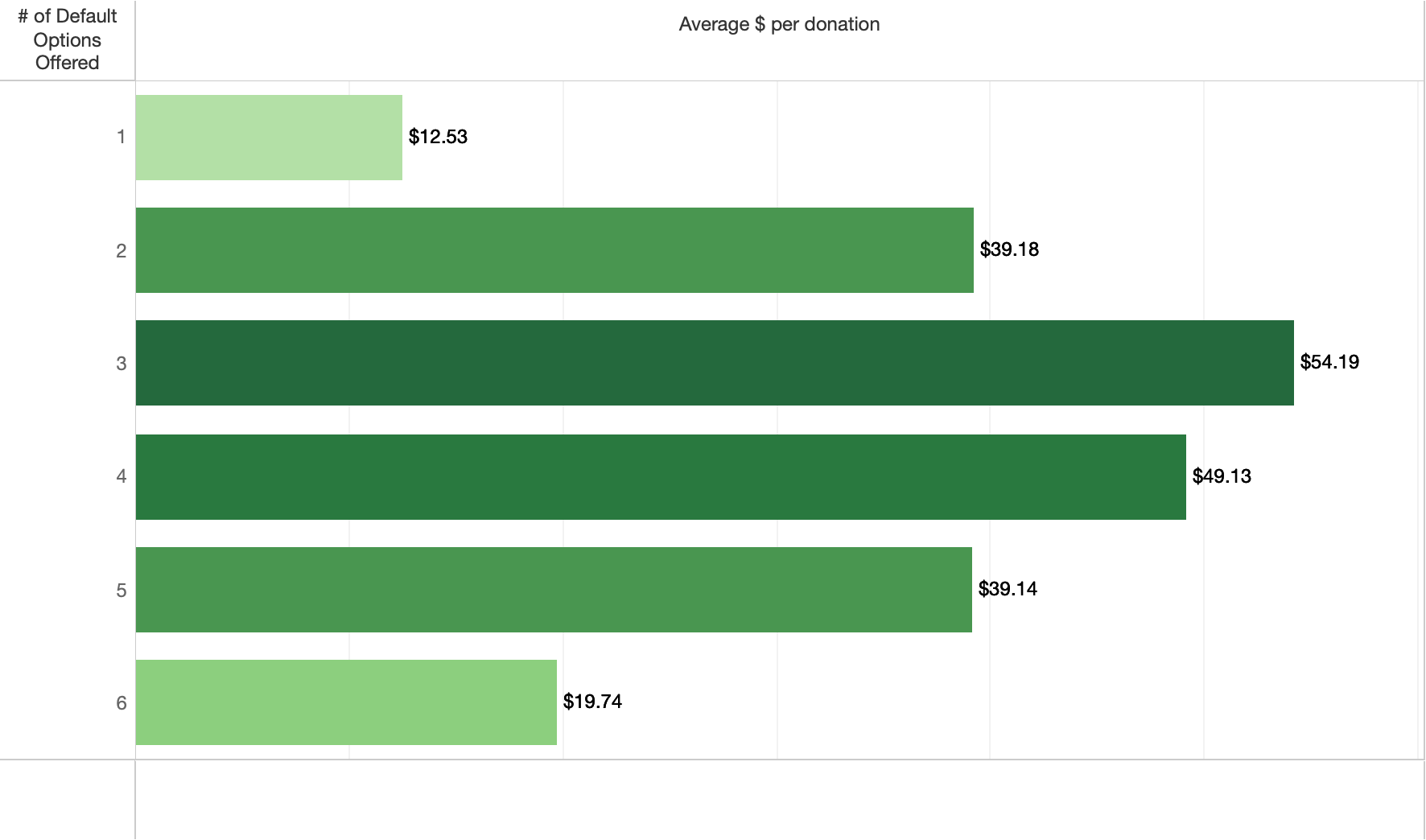 Now that we know the right number of default donation options to encourage larger donations, we can tackle which anchor amounts to offer your donors.

2. Your suggested donation amounts can raise your average donation

Anchoring is a well-known type of psychological suggestion. An example of anchoring in practice is when a charity auction gives bidders a suggested price, but then allows them to bid what they choose. The price acts as an anchor—a starting point if the bidder doesn’t already have one in mind.

Naturally, when donation pages include only one donation option, the majority of donors gave at that anchor price, despite the ability to enter a custom amount.

When organizations offered multiple donation options on their pages, we found that donors typically anchored to the middle options provided. This effect is particularly noticeable for first-time (or one-time) donors.

For returning donors, the anchor is different. A recurring donor’s first donation amount tends to be lower than that of a one-time donor, and they tend to anchor their future donations to the amount of their first contribution. But don’t fret. Even if their initial donation is smaller, a repeat donor is nearly 5.5 times more valuable over their lifetime of donations than a one-time donor giving a larger amount.

In fact, though 70% of all donors are one-time donors, they only account for 27% of the overall  donation total. So 73% of all donation dollars raised came from the 30% of donors who gave more than once.

So what does this all mean for your strategy? In one-time campaigns, like short-term donation drives, ticket sales, Giving Tuesday efforts, and other outreach designed to bring in a new cohort of donors—many of whom will only give once—adjust your anchor donations accordingly, starting higher to capture the maximum impact from those prospective first-time donors.

However, in your ongoing donation efforts, your evergreen donation pages, and your outreach to would-be repeat donors, adjusting your anchor donation down could make appeals for repeat donations or enrollment in recurring donation programs more successful over the long term.

3. Use a payment processor that’s native to your CMS / CRM

The oft-overlooked selection of a payment processor can make a huge difference in the fundraising results of your donation page. The tactics outlined above are made all the more powerful when you process payments in one place—organizations that transitioned to both fundraising and payment processing within NationBuilder in 2020 saw a 57% increase in average donations processed per month. Working with an integrated payment processor allows fundraisers to target more effectively with payment activity that’s connected directly to their database, communications, and engagement efforts.

4. Don’t be afraid to ask again

Asking donors to give again can be scary. It’s not uncommon for nonprofits to be fearful of straining donor relationships or seeming ungrateful with their second ask. As a result, lots of organizations still ask infrequently—even annually—for another gift. You can see the impact of those infrequent asks on the median days to a second donation in the chart below.

However, asking donors to give again can be the best thing for developing stronger supporter relationships. In fact, it’s widely known that donors who give again within 3 months of their first donation will have higher donor lifetime values to the nonprofit that they support.  Donors may feel more connected to organizations that they know appreciate and need their gifts. As a result, the highest-impact change an organization can make to their fundraising strategy is likely focusing on driving donors to their second donation.

In order to convert all the new donors you just acquired through your newly optimized fundraising page into repeat donors going forward, we’ve pulled together three key tips to expand your recurring donor program:

Creating a sustainable base of fundraising support for your organization can begin with just a few simple steps. Before gearing up to launch your next new fundraising campaign, start by devoting some time and attention to every setting on your donation page—it just might be the highest-ROI decision you can make. 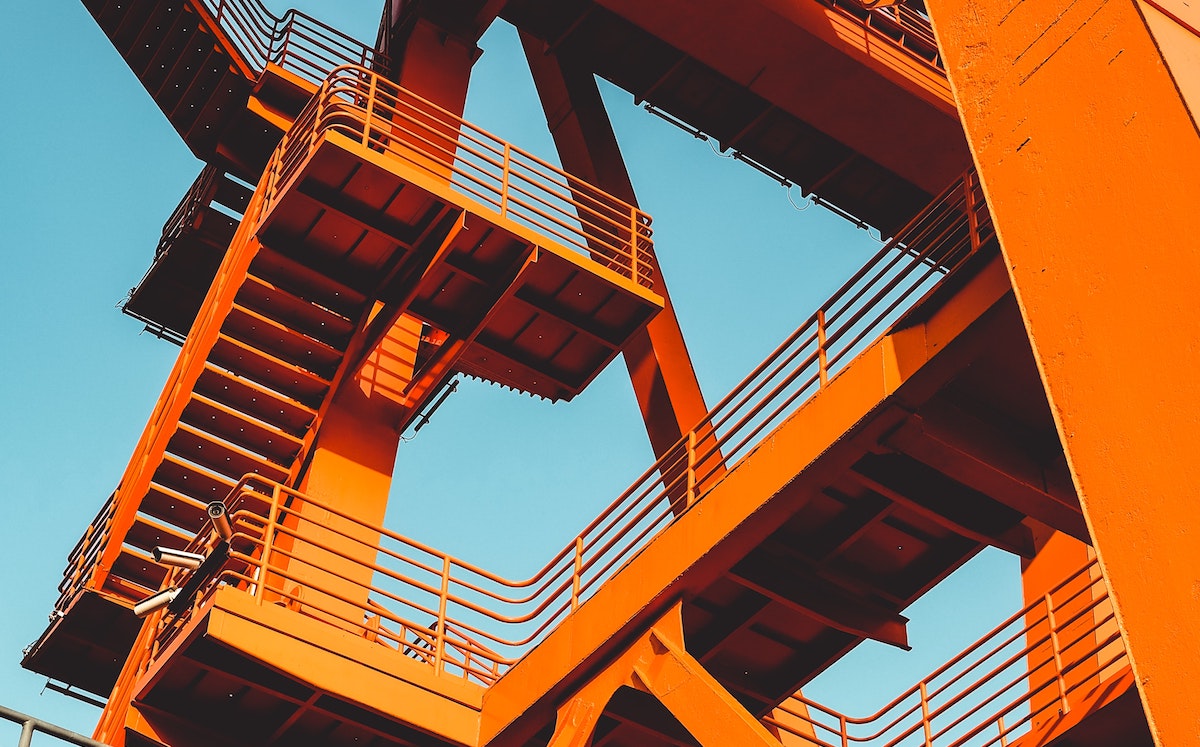 Learn how you can focus on building relationships with your voters, supporters and volunteers—and leave the infrastructure to the experts....