Posted by NationBuilder Support on January 22, 2014 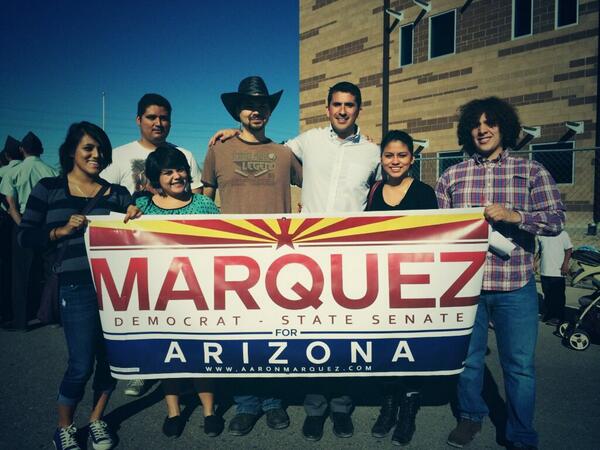 Aaron Marquez and volunteers at the
Guadalupe Veterans Day parade

Aaron Marquez is a candidate of firsts. He's the first Afghanistan War Veteran to run for Arizona State Senate. It's his first run for office. And he's the first Arizona Democratic candidate to raise $44k during the first election cycle.

Last September, Marquez put his job on hold to make running for state legislature in Phoenix his full-time commitment. He spent his time cultivating a field plan to mobilize his community, which includes South Phoenix, Laveen, the Town of Guadalupe, as well as portions of the Gila River Indian Community and Tempe.

"I knew if I made this crucial decision to focus primarily on running for Arizona State Senate, I would have to fundraise every moment of my day," Marquez expressed.

The incredible ground operation that he's building – from new donors to volunteers and existing supporters – is also the first of its kind in District 27. "I'm mobilizing my close network of supporters by asking them to visit our website and make a pledge," he said. When Marquez and I spoke, he was beginning his nightly round of canvassing in an area of the most likely voters on the south side of Phoenix.

Aaron Marquez speaks with an abundance of energy with to-the-minute details of running a local – but extremely important – campaign. With the help of his campaign manager, Allan Lira, and a handful of dedicated volunteers in his district, Marquez is running most of the fundraising and outreach operation himself. The campaign has utilized personal contacts tracked in his nation's people database and followed up with online donations made through his nation's donation page.

In just over four months, Marquez has raised over $44k during the first campaign cycle, breaking the previous Arizona legislature, first-time Democratic candidate record by more than $10,000. The campaign kicked off the new year with 290 donors, collected from many of Marquez's personal networks such as AmeriCorps, military, and college alumni communities. "My initial success came from my personal network, and the NationBuilder platform has certainly made it easier to move a donor from a pledge to a processed transaction," said Marquez.

Social sharing has also come in handy for Marquez's online outreach. Any action his supporters take – from donating to signing up to volunteering – prompts them to share it with their communities. This has helped Marquez's campaign reach new audiences every day. Marquez answers tweets and Facebook messages personally but also insists on making dozens of personal phone calls a day.

Marquez's successful first round of fundraising ensures that his campaign can compete moving forward in 2014. In the coming months, the Marquez campaign will continue knocking doors while also planning to set up a more robust infrastructure in his nation, utilizing personal fundraising pages to encourage proactive donors to organize organically.

"We've got a ways to go, but NationBuilder has no doubt helped us tremendously," he said in closing our conversation. "Now it's time for me to go and knock on doors."

Posted by Flore Blondel-Goupil · May 14