Not only was the recent control panel redesign the largest project NationBuilder had undertaken since its launch—it was different from any other project the engineers and designers of Pod Phoenix had previously worked on. Namely, there was no way to release updates to the control panel in parts because they affected every area of the product––meaning that the work would have to be completed, in full, before any part of it went public.

“It was nine months of work, so it was a very different mindset from releasing continuously, doing small, iterative things... because you can't just release one screen and then completely go back to the old control panel. This meant a lot of celebrating the milestones we’d reached within our own team, since it wasn’t public yet.” - Kaitlyn Higa, Software Engineer

With this massive endeavor ahead of them, the team looked inward for tactics that would keep them feeling motivated on the long road to the finish line.

Their go-to tactic (and an engineering must): Pairing. When pairing, two teammates would either jump on a Zoom call or sit side-by-side to work through coding together. For the control panel redesign, the benefits to pairing were manifold. For example, in the case of newer or younger team members, it was a chance to learn from their more experienced colleagues.

Mike Omlor, a software engineer on the team said: 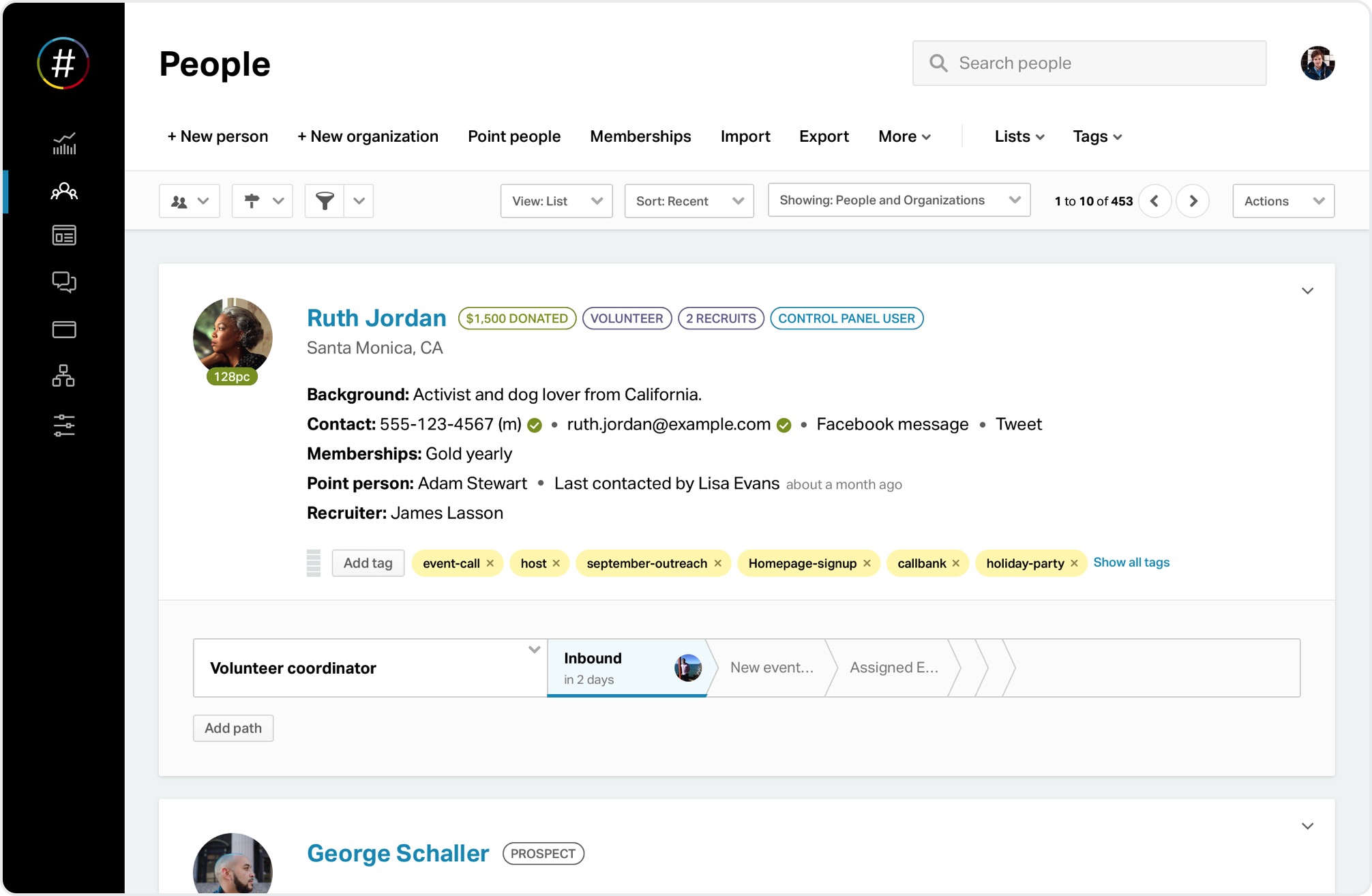 Beyond growth and learning, pairing provided newer team members a chance to get better acquainted with our software and develop a sense of support and community with their colleagues.

“Everybody on Pod Phoenix was always willing to hop on a call and help you out, even with the smallest things––somebody was always there to keep you moving forward." - Alex Carpenter, who joined NationBuilder as a front-end engineer just a few months before the limited beta launched

The control panel redesign relied on the design and engineering teams working in a more integrated way than ever before––and pairing helped facilitate that cross-team collaboration. Working so closely with one another gave the teams an opportunity to discover how things work in each other’s worlds, and led the development of even better processes for working together effectively.

On working with engineering, Andrew Possehl, a key designer on the project, said:

“As designers, we're on one end of the spectrum, and then engineers have a different language and way of approaching things, and it can be hard to bridge the gap. We work so differently, so it's sometimes hard for us to understand each other's worlds. I definitely know a lot more about their process and how things are built now.”

Developing a growing understanding of one another, the engineers and designers of Pod Phoenix continued on with their work––but not without some levity along the way.

To keep spirits high and deepen collaboration, Kaitlyn Higa developed a themed playlist for the project titled “CPR”––a double-meaning that also stood for “control panel release.” They shared the playlist with Pod Phoenix, whose members then collectively added songs to it that represented the project.

The team also leveraged digital spaces such as 15five and Slack to call out milestones and breakthroughs throughout the course of the project. Ranging from ridiculously silly to heartfelt, the virtual high-fives came rolling in week after week. Meanwhile, on Slack, jokes and custom slackmojis kept everyone feeling close as a team, even when they were on opposite sides of the country or in different countries entirely.

Some team members developed nicknames throughout the project, such as Nick Bice and Mike Omlor, interns who went on to join the team permanently, who became known as the “Mario brothers.” And yes, slackmojis were made in their honor.

But beyond the fun, light-hearted attitude that kept the team going, there was powerful, value-based leadership. At NationBuilder, one of our core values is that “We are humans, not robots”––meaning that even when we’re working to do whatever it takes, we still have to acknowledge our own and each other’s humanity. This value was present in the choices the leadership team made throughout the project. From daily check-ins for everyone to share how they were doing personally and professionally, to putting empathy first––the human factor was always a priority.

On how prioritizing empathy guides the choices he makes as a leader, Jesse Haff, VP of Design, said:

“I bring my attention on a day-to-day basis to where people are at to try and identify when someone is facing a challenge and unblock them. People are everything... It’s important to invest and believe in your team so they feel energized and nourished. We’re here to help and support people when they're feeling burned out or up against something that feels impossible.”

This focus on empathy transferred to the approach that Gabrielle and James, Sr. Engineers on the project, took at times when their teams were feeling stuck. Rather than adopt a hierarchical stance that relies on knowing all there is to know about engineering, they were trusting enough to be candid:

“I think it can be scary to admit that you are unfamiliar with something and still feel confident at your job, but they both do a really great job at being excellent engineers, but also being free to say 'Oh yeah I've never seen that before, you want to look at it together?'” - Ryann McQuilton, Software Engineer

Though at first the project required Pod Phoenix to create their own little community, when it came time to get the product ready for a full, public launch––it took participation from people all across the larger NationBuilder team. The QA process required countless tests of the new control panel that would have to be written and run, and Alicia Donovan-Brainerd, the engineering project manager heading up the effort, realized that just one or two people—or even the entire engineering team—wouldn’t be able to write and test all the views in time.

Up until this point, the teams not working on the redesign had only glimpsed the changes Pod Phoenix had been working on during bi-weekly pod demos. But now, the larger NationBuilder team would need to dive in head first––and we were ready for the challenge.

On the team’s willingness to jump in and help with QA, Alicia Donovan-Brainerd said:

“Everyone is so invested in the culture and believes in community and building leaders as the [most important] thing, and it really shows in that everyone who works at NationBuilder is a leader, builds community, follows the mission and values 115% at all times… There are no barriers to getting things done at NationBuilder.”

Everyone from our Customer Support team to our Customer Engagement team volunteered to contribute a portion of their time to QA. Volunteers jumped in where they could, blocking off calendars and buckling down to write tests, and at the center of the effort was engineer Kaitlyn Higa, who created thorough documentation on how to both write and test—ensuring that anyone on the team, no matter their function, would be able to understand the process and contribute.

At first, the plan was to have a company-wide day of QA for everyone to join, but the overall enthusiasm to help in the preceding days led to an unexpectedly early finish. The tests were done with a full day to spare.

“I remember on the last day of QA, Alex SM and I were just grinding away on the last few tests, and then all of a sudden, we [saw] the backlog of work go completely empty…it was incredible.” - Kaitlyn Higa

With QA complete, it was only a matter of time before the limited beta release that would give a select group of NationBuilder customers access to the new control panel, and soon after, the full beta release to all customers, existing and new.

Stay tuned for our next post to hear how, after a year of work, the newly launched redesign completely changed the way we’re able to make updates to our product moving forward.

And if you’d like to learn more about our product and the new control panel––feel free to drop into one of our two weekly software demos.

Posted by Flore Blondel-Goupil · May 14