Fire up your nation's MVPs with social capital and leaderboards 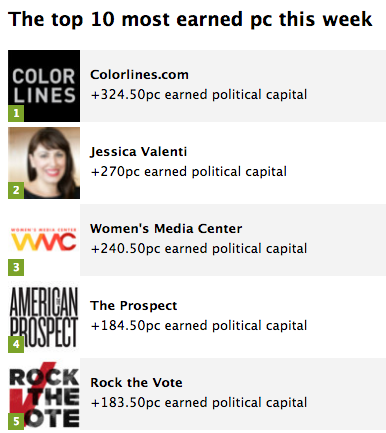 Social capital (also called "political capital" or "PC") is NationBuilder's currency system. With a little bit of planning and some creative thinking, you can use political capital (or whatever you'd like to call it in your nation) to motivate your supporters to take different actions in support of your organization.

For example, Greenpeace India used their version of PC, "karma points," to drive support for the Junglistan campaign — an effort to stop the Indian government from clear-cutting huge tracts of land for coal. They set up a leaderboard to rank and recognize the petition signers who were able to recruit the most supporters and campaign leaders from their networks and communities. Ultimately, they mobilized more than a quarter of a million people to take meaningful action in support of the campaign.

Read more on how Greenpeace used NationBuilder to accomplish this.

If you're not familiar with political capital, here's a good overview of how it works.

Political capital is also great for identifying the people who are making the most valuable contributions to your nation - which could be referrals for a business or fundraising for a nonprofit. Here's a blog post from NationBuilder Expert and Architect cStreet campaigns that explains how to use PC as a backend analysis tool. Once you're able to identify these people, you can reach out to them and identify ways to engage them further in your mission.