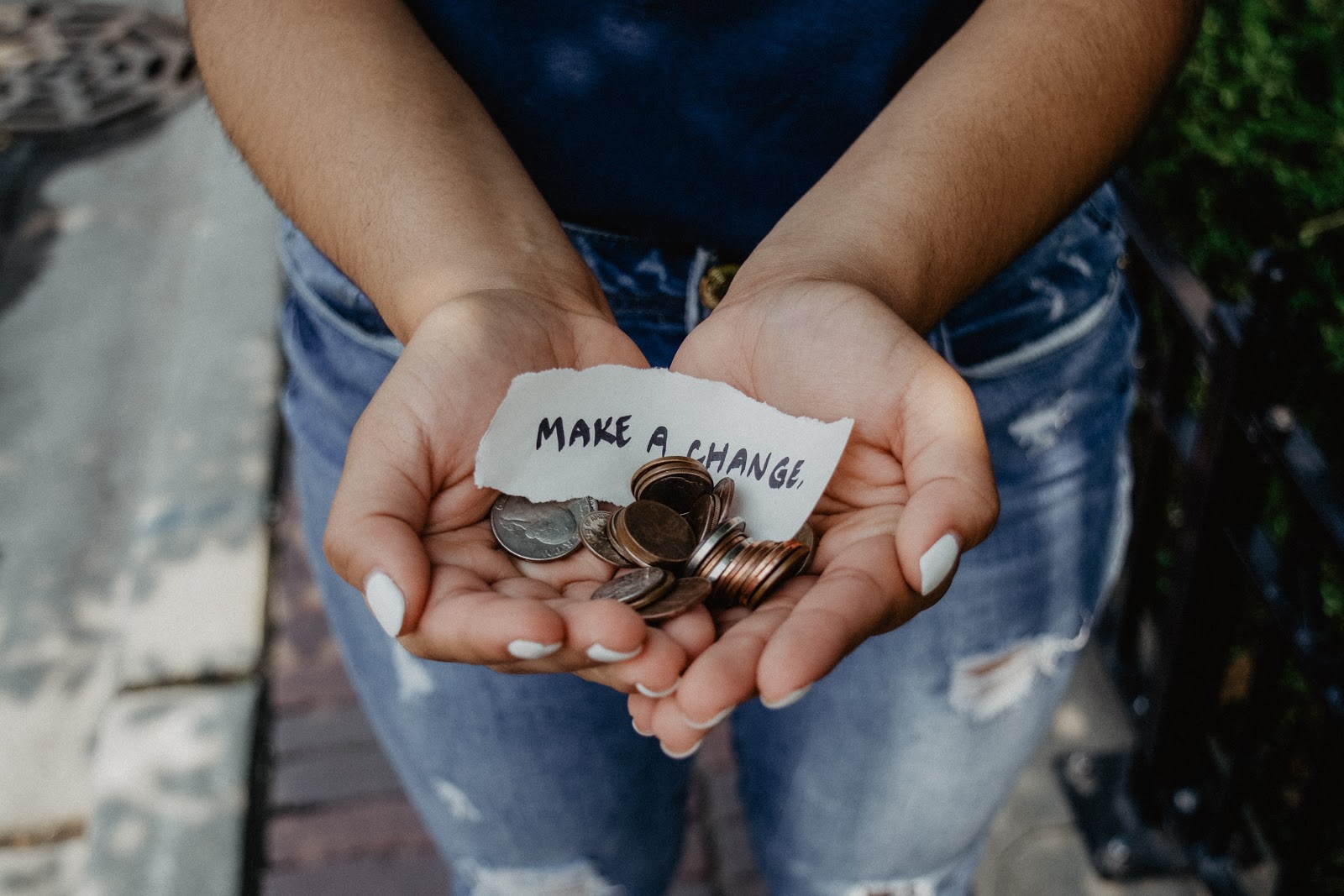 At NationBuilder, we create software designed to equip and empower leaders to tackle the breadth of challenges they’ll face in growing, engaging, and inspiring their base of supporters to take action—from the most basic tasks like identifying their supporters, sending emails, and creating webpages, to complex targeting, analysis, and strategic communications. That means we’re always striving to generate and stay on top of the latest research into what makes the organizations who lead the pack truly successful.

So, in the competition for people's attention, time, and money, what do the most effective fundraisers do? As NationBuilder’s head of strategy, I have witnessed thousands of charitable organizations and advocacy initiatives of all sizes, raising money across a variety of sectors—and I wanted to share some of my insights on what the highest performers have in common, and which strategies contribute most dramatically to their success.

Look to your people for more than money.
The days of putting your supporters into silos—donor, volunteer, advocate—are over. Don’t assume that people want to engage in one activity alone. As it turns out, fears about not bothering your base, or reserving your asks for the all important donation requests, are unfounded. In fact, we found that donors who were asked to engage in other activities as well—for instance, volunteering or engaging on social media—made donations 60% larger than those who were only asked to donate. 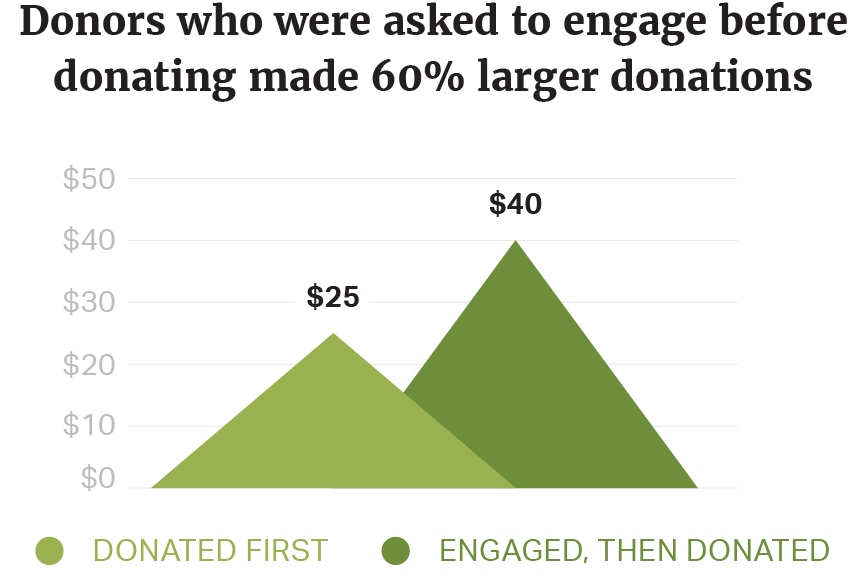 More specifically, nonprofits received the largest donation amounts from donors who first signed a petition, volunteered, or attended an event. People who completed one of those activities before donating, gave an average of $40. Compare that to the $25 from donors who donated first.* And the impact isn’t just on one donation. Engaging your supporters in more diverse activities likely means they’ll give more often. Political campaigns, for example, engage their donors in other activities first over three times more often than the average nonprofit in our study. And they receive double the average number of donations per donor.

The takeaway: Robust small donor programs benefit from offering multiple ways for donors to participate and creating many paths to engage would-be donors among their base.

*All featured statistics are based on an aggregate, anonymized data study from our community. This particular statistic pertains to customers on our Leader and Organization plans that received at least one donation.

Think like a politician. Work on a timeline.
Across our diverse customer base—including nonprofits, advocacy groups, and consumer brands as well as political campaigns, parties, and governments—we’ve seen that the political campaigns in our community raise an average of 100% more donations per donor. They also ask for that next donation more quickly—250% faster than the average nonprofit does. In addition to effective engagement tactics, like engaging donors in activities beyond giving, their success in raising money also has to do with the campaign cycle itself.

Nonprofits can learn from the strategies and conditions that make political fundraising work. Try self-imposing deadlines to create campaigns that stress urgency and raise more in a shorter period of time. Then, start sending more diverse requests to donors to volunteer and host or attend events, to maintain more consistent engagement with those who have donated. Finally, don’t shy away from a second ask. Asking again within a short time period after an initial donation might actually improve your chances of ongoing support. On a higher level, it’s a useful exercise to think about the strategies a candidate uses to create a bond with her most loyal base—like telling a compelling story, engaging authentically with her community, and working to build trust—and commit to inspiring your supporters in a similar way.

Point people are powerful.
Though it may feel like it doesn’t matter to your audience what happens behind the scenes, a human touch makes all the difference when you’re fielding questions and planning your communications. We found that donation amounts increased by a whopping 100% among donors who were assigned a dedicated ‘point person’ in NationBuilder, giving them a personal connection to a larger organization’s efforts. Interestingly, this remained true across all sectors of our customers. This statistic matters because donors tend to contribute the same amount or more the next time they donate, further multiplying your fundraising results. If you’re curious about what point people are or how to use them, check out this guide by NationBuilder Director of Advocacy & Brands, Ryan Vaillancourt.

Ask, ask again.
If at first you don’t succeed in your fundraising asks—and, even if you do—it’s worth your time to ask again for just as much or more. Though up to 79% of donors might only make a single donation, there's a good chance that those who donate again will at least match their previous contribution. Among repeat donors in our community, we found that roughly 50% of people donated the same amount in subsequent gifts as they did their first, and nearly 25% donated more in subsequent contributions than they did in their initial donation. That’s proof positive that it helps to be persistent with your requests and specific in the amounts you ask supporters to donate. Incorporating varied engagement requests into your communications between fundraising campaigns might raise your chances of success, and the higher average donation amount you receive with the help of dedicated point people can further multiply your fundraising results. 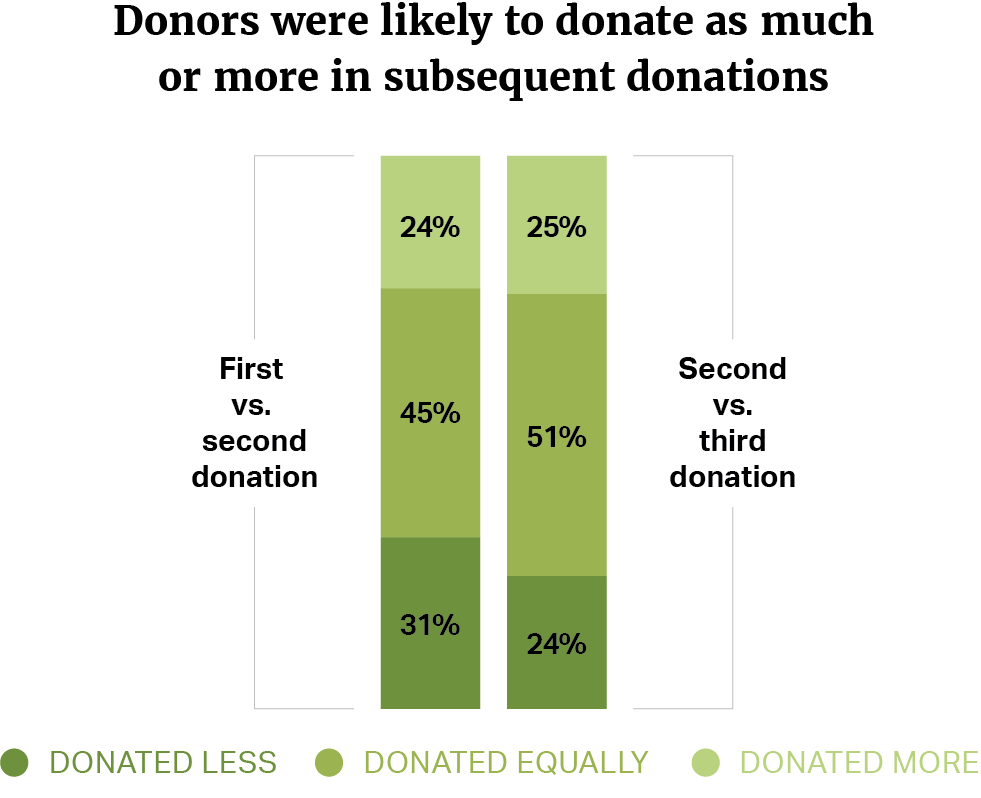 More leaders mean more dollars.
There’s real power in giving your power away to your most steadfast supporters. We’ve seen a direct correlation between the number of leaders in customer organizations and the extent of their success. For instance, customers who gave more people access to their digital tools saw a greater number of cumulative donations, among other telling metrics. The more people you have actively working with your database in a way that’s digitally trackable, the more you’ll expand your reach. What does this look like? We call it “distributing leadership,” and it manifests in the following ways: the more people you empower to start events, spread the word, and recruit new members and volunteers, the more sign-ups, event RSVPs and, ultimately, donations you’ll see throughout the year.

In measuring success across our community, we don’t focus on one-time engagement. We care most about identifying the strategies that work to keep supporters engaged for the long-term, actively participating, and donating for years to come. These habits help convert your one-time supporters into thriving communities that grow, advocate, and fundraise on your behalf, so you can exceed your fundraising goals and ensure your organization’s future.

Hilary Doe is the Chief Strategy Officer at NationBuilder and a nonprofit technology leader, committed to powerful citizen engagement and leadership development. Prior to joining NationBuilder, she was a senior leader at the Roosevelt Institute and acted as the National Director of the Roosevelt Institute | Campus Network—the nation's largest student policy and leadership development organization.