Crowdfunding is growing in popularity, with everyone from independent emergency service groups to celebrities taking to the internet to ask for funds. Comedian Jon Lajoie launched his own 'kickstarter,' illuminating how absurd it can feel when celebrities ask fans to pay to create content.

I laughed a lot while watching the video, particularly at this statement:

On an income scale, you have homeless people, decorated war veterans, school teachers, doctors, lawyers, then all the way up here, you have me. Because what I do is way more important than all those other things.

Considering that Sir Lajoie (as he refers to himself in the video) accomplished his goal of hitting $500 million in under an hour, I'm clearly not the only one enjoying the campaign. To date, he has 'raised' over $11 billion, gaining coverage in Mashable, Reddit, Huffington Post, and Complex. Even Zach Braff chimed in. 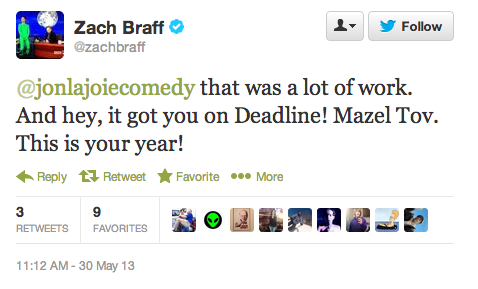 Curious how Sir Lajoie was able to ask people "How much hypothetical money will you pledge to donate to this totally real thing?"

Jon Lajoie's personal site is built on NationBuilder. He used a money bomb page to encourage people to commit to his 'kickstarter' campaign. As he noted in the video, this approach would not be allowed on the Kickstarter platform. With NationBuilder, you have creative license to use the platform in different ways. Then the public can decide what they want to do with their time and money - and organizations have full access to their supporters, pledges and donations.

If you've already given to Sir Lajoie's 'kickstarter' campaign, don't worry - it truly is hypothetical money. Although, who knows, he might ask you to make good on your pledge when August 26th rolls around.