When Jim Cupples teamed up with NationBuilder to start RunForOffice.org (RFO) in March of 2016, he did so to help even the playing field for civically engaged people entering politics for the first time. RFO serves a purpose that major political parties can’t, which is to recruit candidates all the way down the ticket and support newcomers in local races. Using publicly available data and generously given time from volunteers, RFO provides any and all would-be candidates with key information on the offices available in their districts, which elections are coming up, and what it takes to file as a candidate for positions around the nation.

There are more than 500,000 electable offices in the United States, and so far, RFO’s database includes all executive, state, and federal positions, along with local municipal positions in 50 of the largest counties. But, since local positions for an entire county can be hard to capture (particularly in remote locations), RFO issued its supporters with a challenge at the beginning of 2017: to cover every US school district—which encompasses more than 100,000+ positions, each of which could start someone’s political career. 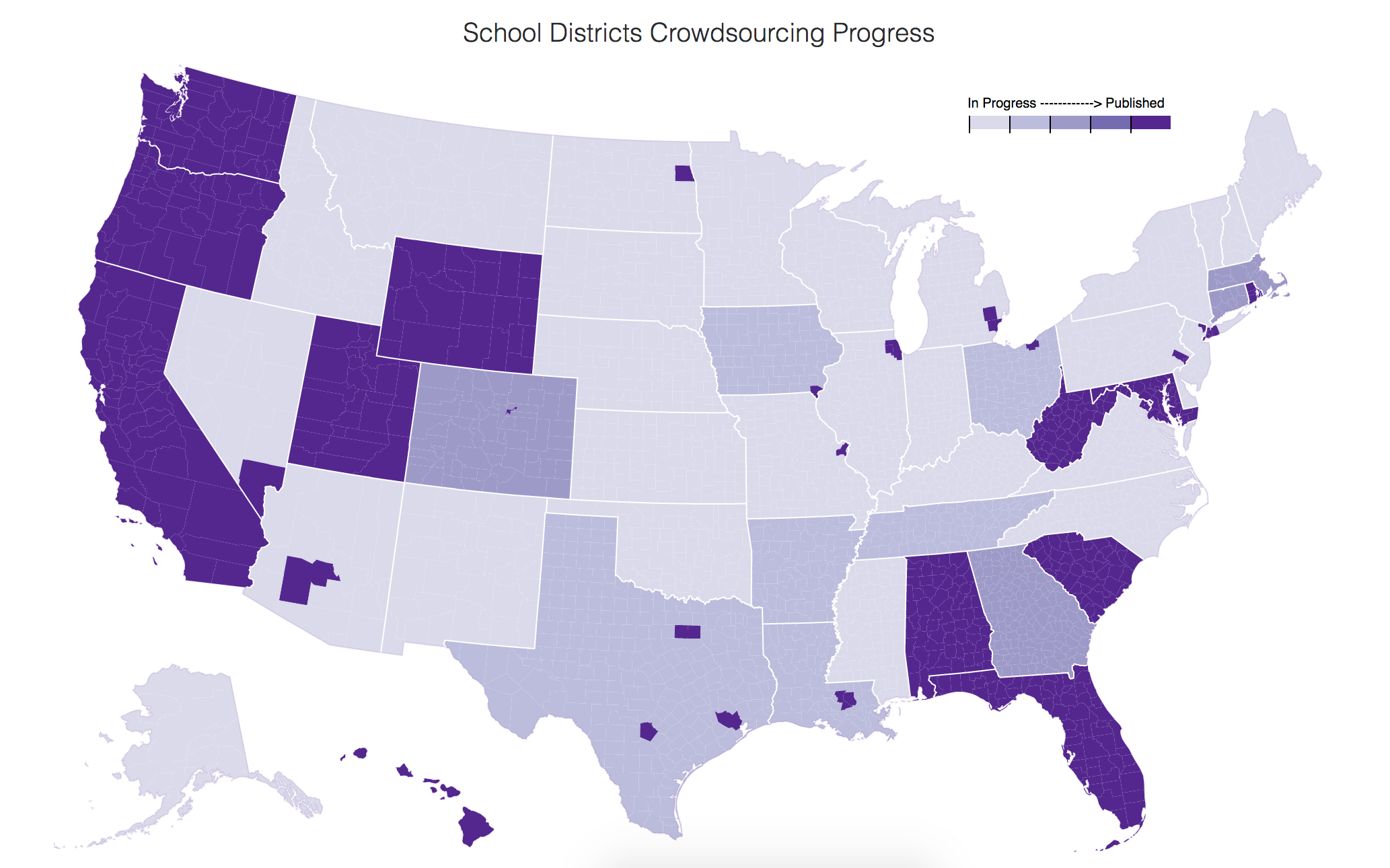 A project of this magnitude requires a committed community, organizing know-how, and powerful digital tools (in this case, NationBuilder). Jim and his team assign school districts to volunteers on a county-by-county basis, and those volunteers get to work collecting the data for each county's school board positions, either through digital research for established municipalities or via direct outreach for districts that have yet to document their electable positions online. Since volunteers work remotely, covering unfamiliar rural areas can be an onerous task. But, as Jim likes to say, “where there’s hard work, there’s good work.”

We salute the hard (and good) work of RFO’s top five crowdsourcers—dedicated volunteers who’ve covered an incredible amount of ground since the project started earlier this year. Read more about what drove them to chip in, and join their efforts here.

With 20 hours logged, the RFO team was confident Rianna could research her entire state if duty called. She came to RFO as a recent Skidmore College grad with experience working as a Canvass Director for the Community Voters Project in Charlotte, NC, followed by a stint as a Referendum Coordinator in the New Jersey PIRG Student Referendum at Rutgers. Now, she’s finishing up a D.C. internship and planning next steps, all the while volunteering to stay active in political organizing, training, and research. According to Rianna, “I think helping people to run for office, especially locally, is so crucial and important in a democracy. Since many aspects of our democratic system seem to be...threatened, I'm certainly happy to be helping out with this project!”

When this self-proclaimed “adventurer, wife, scientist, and student of life” isn’t researching school district data (at least 15 hours logged so far), she’s a meteorologist for a science and engineering applications company, working on a contract with NOAA's National Centers for Environmental Prediction (NCEP). “Not long after Bernie Sanders announced his candidacy for the 2016 Presidential election I [took] a keen interest in politics," Shelley says. "Bottom line, regardless of leanings I am a big advocate for the political process and think everyone should participate without limitation or restriction.”

Quite notably, Andrew accomplished the feat of logging all Rhode Island school boards—his entire home state. In addition, he also took on some challenging districts in Alabama, poring over local data from a faraway state in the evenings after his day job. Though Andrew doesn’t work in politics or education, he has a BA in political science and some background working for his local city board of canvassers before college. “I decided to volunteer some of my time because I'm unsatisfied with the current state of political discourse and believe that changes need to be made," Andrew says. "I've volunteered for my local Young Democrats chapter in the past, but I didn't like volunteering for a party that seems more interested in pleasing party elites (donors) than actually enacting progressive policies and electing progressives at all levels of government.”

Kristin got a firsthand look at the inner workings of RFO by completing a GIS internship through UCLA during the fall of 2016. Though she’s originally from Germany, she took quickly to understanding American government as well as the technical requirements of retrieving the maps and shapefiles to show visual coverage of school districts for the project. Simultaneously tracking a dozen different map-gathering efforts at any given time, Kristin has been instrumental in the GIS work in some of the most challenging counties to capture to date.

After reading a piece Jim Cupples published in his local newspaper, Spencer made a point to engage the author directly and get involved. Since he retired from his career as a software engineer, he’s taken more time to pursue his lifelong love of music, playing jazz and classical guitar as well as arranging and composing, a gig he calls “the hardest and most fun job of all.” Not only has Spencer logged many hours researching school districts, he’s also created informative leaflets about the project to distribute at rallies and draw new recruits. In his words, “The idea is to build political power by starting from the bottom and working up."

Inspired? Sign up to volunteer at RunForOffice.org and help this team reach their ambitious, worthwhile goal.