Lead people to action with paths

With paths, one of NationBuilder’s newest features, you can create custom steps for leading people to take action towards larger goals. Why are paths useful?

Paths solve a common challenge. As a leader, you are trying to guide a group of people from A to achieve B, but this can be extraordinarily messy.

Imagine you’re leading the campaign for a new community center and garden. To succeed, you’ll need to raise $450,000, identify 100+ paid members, recruit 20 regular volunteers, and attract 200 attendees to the campaign launch event. The goals are daunting and the process to reach each goal isn't straightforward. You want everyone who rsvps to make some kind of commitment at the event. From there, potential donors need follow up; prospective members need to be invited, their applications reviewed, and payment received; volunteers need to signup, be invited to specific events, and commit.

Instead of a direct route, getting from A to B involves numerous smaller steps and detours. Picture a ski slope. It’s difficult to keep track of where people are at; they’ve started at different places at different times and progress at different rates. If you try to force everyone down the same path like a herd of cattle, people won't be happy. On the other hand, if you hold everyone by the hand, it’ll be impossible to scale your efforts.

This challenge should resonate if you’re a campaign staffer, fundraiser, volunteer coordinator, community manager, marketing professional, alumni director, or executive director. Without a systematic way to lead people to take action, we all know that lazy habits prevail: sending wishful email blasts into the ether, flooding social media with the same call to action, asking people who recently donated $500 to donate “just $10 now.”

1. More alignment - Paths help to increase alignment across your team by defining the steps required to move each prospect or supporter towards larger goals. Many teams experience substantial slack because the plan for encouraging people to take action is unclear. Paths remove that muddiness. For example, if you need to identify 150 volunteers, you can create a volunteer path to clarify steps for moving people who sign up on your website to become a volunteer IRL.

2. Improved targeting - Since paths give you a precise portrait of where each person is at in relationship to your organization, you’ll be able to guide people to the next step in a highly targeted and personal manner. With paths, profiles now tell a multifaceted and richly informative story. Each person can be on multiple paths. Here we see that Jason is a potential donor, has already volunteered, and needs to be confirmed as an event host. You can filter your people database to instantly find all the people who are on specific steps of specific paths.

3. Better insights - Paths give you a rich panorama of how your community as a whole is progressing, so you can quickly see what’s working, what’s not, and make it better. With the new paths view, you can instantly examine aggregate people data along a given path and spot problems. For example, if your organization needs a constant stream of donors but your path view shows what’s below, it’ll be clear that you need to identify more potential donors and devote more attention towards cultivating one-time donors into recurring donors. 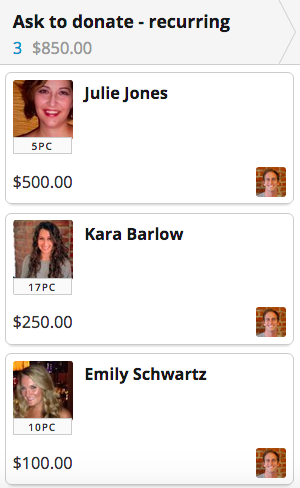 responsibility across your team so each person knows which paths and steps they’re accountable for. The task of leading hundreds or thousands of people is too much for one person. Effective organizations break big, unwieldy goals into smaller, focused tasks. That’s why each path and step and can be assigned to a control panel user. For example, if you see a bottleneck in paths view showing that zero one-time donors have given again, you can assign that step to Kevin so he’ll take charge of cultivating recurring donors.

At the end of the day, paths propel your community's progress towards larger goals, and that’s what software for leaders is all about. In coming months we’ll be sharing stories about all the ways our customers are using paths. So -- how will you use paths?

See our HOWTOs to learn more about creating paths and using default paths.