People's Vote spreads a powerful civic movement throughout the U.K.

With record-breaking demonstrations and mass outreach to Members of Parliament, a grassroots coalition continues to amplify the public demand for a People’s Vote on Brexit and gain traction within the U.K. government. 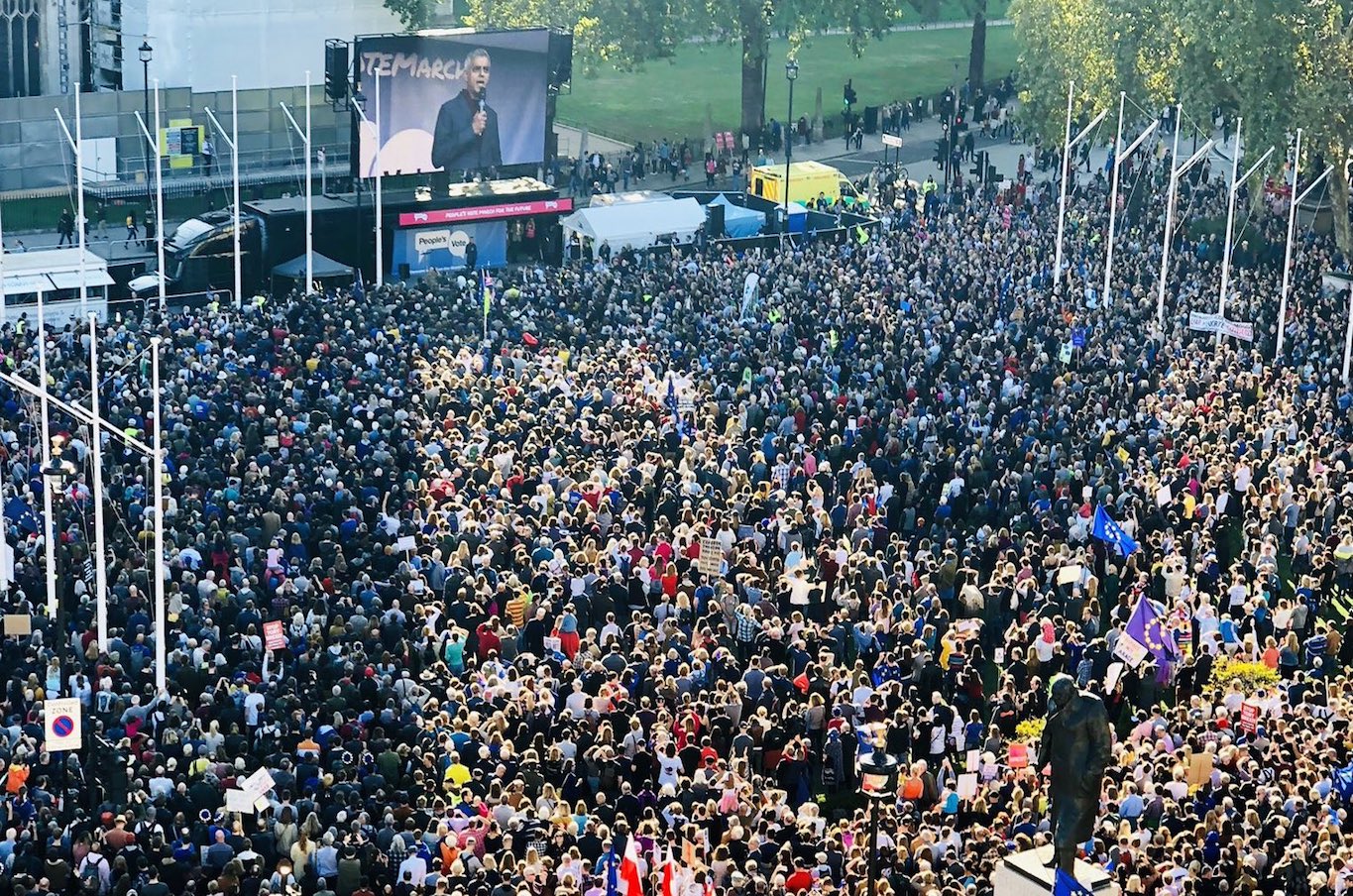 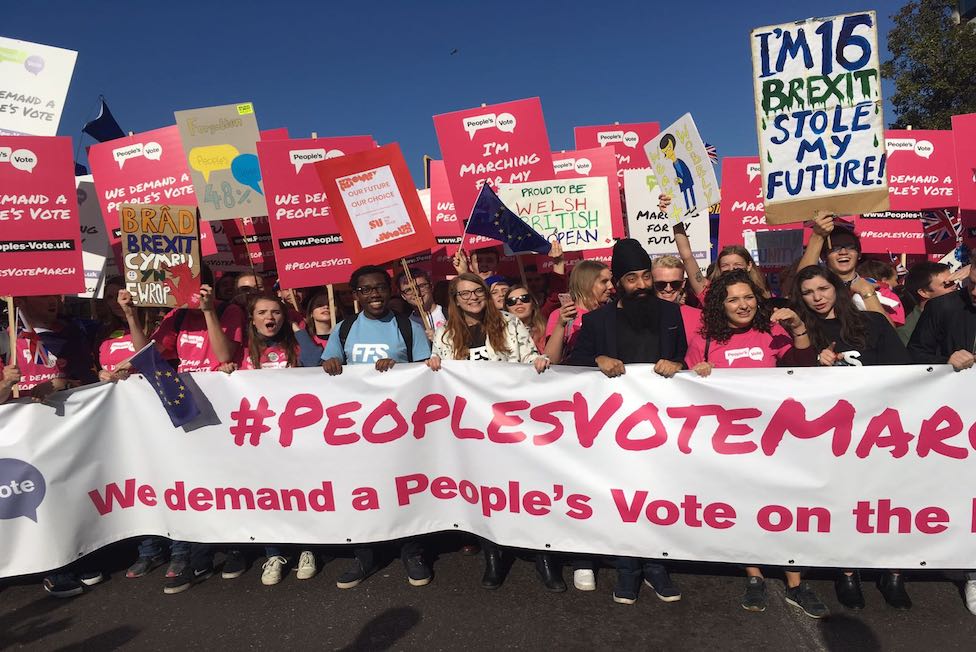 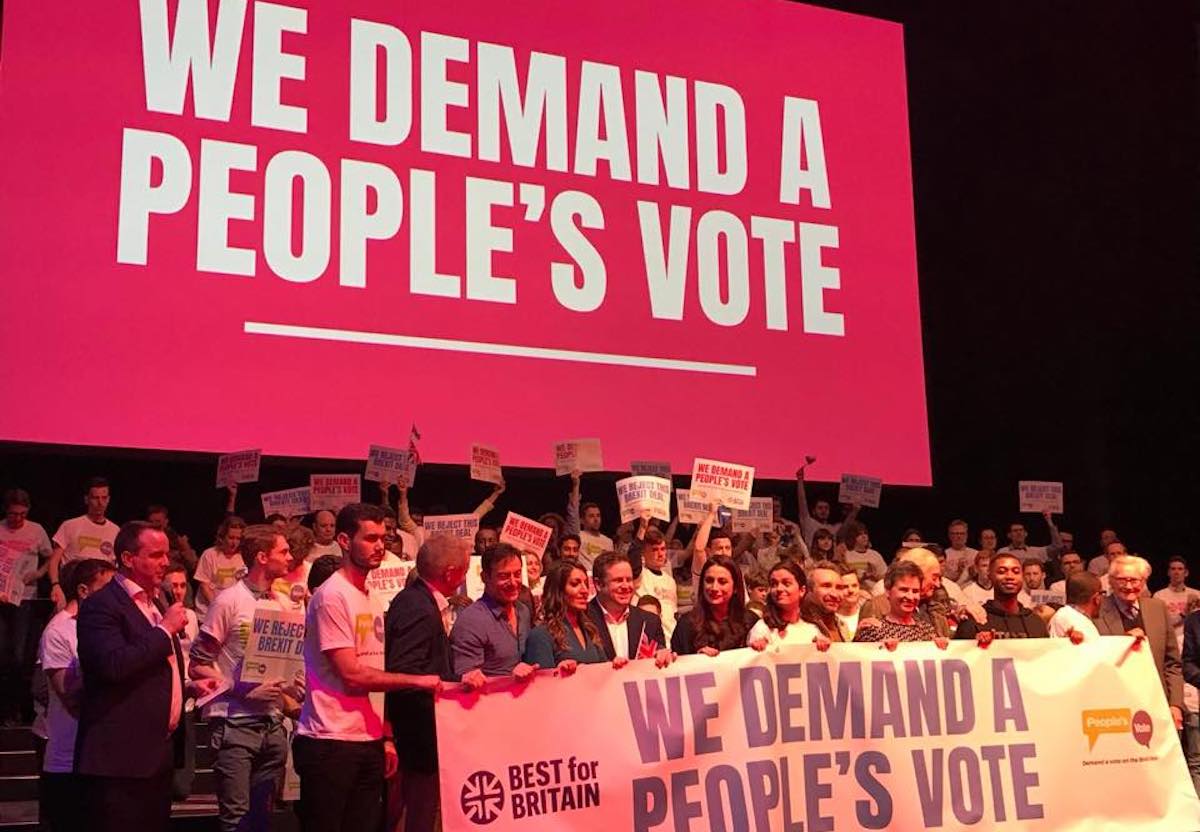 In 2003, citizens of London poured out in droves to protest the Iraq War. Fifteen years later, on October 20, 2018, 700,000 people filled the London streets in the largest demonstration since then to demand a People’s Vote—a chance for the people of the United Kingdom to have the final say on the controversial Brexit plan to leave the E.U.. Front and center were young people, who on average voted 73% in favor of remaining in the E.U. in 2016, and whose spokespeople led a rally in Parliament Square following the march to speak out about how Brexit was already negatively affecting their future prospects and opportunities. The mass demonstration was the result of months, and in some cases years, of organizing by more than 100 grassroots groups, including Open Britain, the European Movement U.K., Britain for Europe, Scientists for E.U., NHS vs Brexit, Our Future Our Choice, For Our Future’s Sake, Wales For Europe, and InFacts.

Notably, the team at Open Britain had been organizing for their cause on NationBuilder since before the Brexit referendum as part of the Stronger In campaign. When we connected with Alex Clifford, Head of Digital at Open Britain, after the Brexit vote in 2016, he had said that, “The biggest positive to come out of it all was that shortly after the results, Open Britain was formed and we [had] inherited the biggest mailing list of Pro-Europeans ever seen in Britain.” Now, Clifford heads up the digital efforts for both Open Britain and People’s Vote, helping to mobilize a base of supporters that has grown exponentially, both in size and level of engagement. With the help of a vastly expanded network, the engagement strategies leading up to October’s historic march encompassed everything from targeted email outreach to high-profile PR campaigns, intended to drive the largest possible turnout. Clifford says,

“While mobilizing for the march, we used different engagement asks to encourage two groups of people. To the people who had already RSVP’d, we sent resources preparing them for the march—for example, videos on how to make their signs and placards for the upcoming march, content they can share to invite friends and family online. We even provided a route finder, asking people how they were getting to the march—i.e., are you going by coach, are you going by train, are you walking, are you driving, how many people are you bringing, what time are you setting up?—just so people had in their minds a plan of how they would get to or around London on that day.”

For the second group, people who had yet to RSVP, People’s Vote harnessed the star power of the public figures appearing at the march and rally, as well as the celebrities who signed on to donate entire buses that would carry marchers into London. “For example, Gary Lineker, a very famous footballer, donated the cost of a coach to go from Leicester, which was his hometown football club. We also had Eddie Izzard, a British comedian, sponsor a coach from Bournemouth, and Alastair Campbell, former advisor to Tony Blair, donate a coach from Burnley—all places they had connections to and had supported People’s Vote. We would send targeted emails to these areas through our local groups to our supporter lists, saying, ‘Alastair Campbell is sponsoring a coach in your area; sign up here,’” says Clifford. Once people were excited enough to RSVP, they could be nurtured and engaged in preparation for the big day—making signs, finding friends, family, and neighbors to bring, and planning their travel together.

Since October, People’s Vote has wasted neither time nor momentum in calling on its enthusiastic supporters to apply measurable, visible pressure on their local MPs to put the final Brexit decision back into the hands of the people. To power their “Not Buying It” and “Only Way Forward” campaigns, they created a tool making it easy for supporters to send their MP a pre-drafted, customizable message saying that they believe the currently proposed Brexit deal does not deliver on promises made in 2016, and that’s why MPs should both vote it down and demand that the government allow for a People’s Vote.

The coalition still mobilizes groups across the country for frequent events and fuels a successful ongoing fundraising effort to support the next battle, which will ultimately be waged in Parliament. “Our main strategy at the moment is to keep pushing people to email their MP,” Clifford says. “Even if they emailed them once, they should email again and tell them why it’s so important, because it’s the biggest issue in the country since the Second World War. The online organization for that is absolutely crucial to what we’ve delivered already and what we are going to bring into 2019.”

“What’s really helpful is that NationBuilder offers a multitude of ways to donate. The donation journey is quite easy with the sliding donation pages. We have a lot of supporters saying that it’s a really nice, smooth process, so that helps keep people coming back. We’ve got a high number of regular donors, so when we ask they give, and they give again.”