NationBuilder, RunForOffice.org, and BallotReady create the first public database of school board positions for all 50 states

Nine months ago, NationBuilder and RunForOffice.org embarked on a uniquely ambitious project: to map all the electable positions in school districts in the US with the help of dedicated volunteers. Since then, a total of 275 people have contributed at least 3,491 total hours of work to research 13,090 districts, resulting in 81,361 school board positions available for public search.

This is the first time US school board election information has been free and publicly available on the national level for all school districts across the 50 states, which means that the data required to run for key local, entry-level offices is now more accessible to more people than ever. Notably, what sent this project across the finish line wasn’t a federal task force or government initiative—but a partnership among individuals, educational nonprofits, and civic technology companies who believe in the power of data to help lower the barriers to leadership. 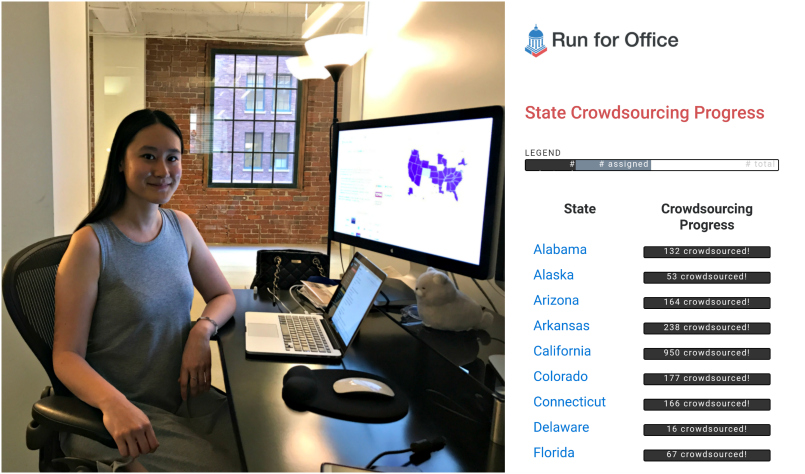 We learned early on in the process just how inaccessible (and sorely needed) this data can be. In many districts, particularly in rural areas, school board election information was unavailable online and required phone outreach, research of old election results, or even direct contact with the very officials whom interested candidates would be running against. In cases where incumbent officials regularly run unopposed, elections are often deemed too expensive to administer and then canceled, leaving no record of results for many cycles on end. A lack of opposition in one cycle can mean a lack of accessible information for challengers in the next.

The task for our team and partners was twofold: to develop digital tools that create a standard for the school board information we need to collect from each district and facilitate the organization of volunteers who would use those tools to gather the data as efficiently as possible. Using what they had learned from a highly manual research process, the NationBuilder Data Services team created a list of inputs to minimize the guesswork required to learn how to run for a school board office, then created a custom internal app to help track volunteer hours, assign volunteers to specific districts, and centralize the data collected for those districts. The data could then be “mapped” across the US using the same technology NationBuilder customers use for auto-districting voters in their campaigns.

After six months of slow and steady progress completed by an incredibly committed roster of volunteers, we joined forces with BallotReady this summer to tackle the home stretch— covering more than 8,504 districts within the final month of the project.

As Oskar Müller, one of the USC interns who contributed to the project, sees it, “The important part...is making sure everybody in the country is afforded the same tools and resources to better their communities. Children should not have their education dependent on location and money, and one of the best ways to mend education gaps between several demographics is to make sure their school board is filled with passionate community members who will represent all of the student's best interests.”

We agree wholeheartedly, and can’t wait to see even more new candidates step up to lead. Learn more and volunteer here.