This case study is brought to you by Van City Studios - a certified Agency based in Vancouver, Canada. Be sure to visit their website and see their previous NationBuilder work.

October 19th, 2015 was a tough night for Canada’s New Democratic Party. Despite starting out first in the polls going into Canada’s 42nd election, support for the NDP faltered over the course of a hard-fought 11-week campaign. On election night, the NDP lost its status as the official opposition party, and landed back in third place.

No less than 59 seats were lost by the party across the country — mostly to Liberal candidates — many of which were held by veteran NDP MPs. Here in B.C., the overall NDP vote share dropped by almost seven percentage points.

MP Kennedy Stewart from Burnaby South was one of the few veteran NDP MPs to survive Trudeau’s “Red Tide”. Kennedy was also one of the few NDP candidates in Canada to use NationBuilder to run a digital, data-driven campaign, which he considers one of the key pillars of his success on election night. Our team at Van City Studios worked closely with Kennedy and his team to help them get up and running on NationBuilder.

One of the key components of Kennedy’s strategy was a strong focus on fundraising efforts. We designed a sleek, modern, action-oriented and mobile-friendly NationBuilder website, empowering Kennedy and his team with the tools they needed for their digital fundraising efforts.

The results speak for themselves —Kennedy raised more money than any other NDP candidate in any other riding across the entire country. Over three-quarters of those dollars were donated online. 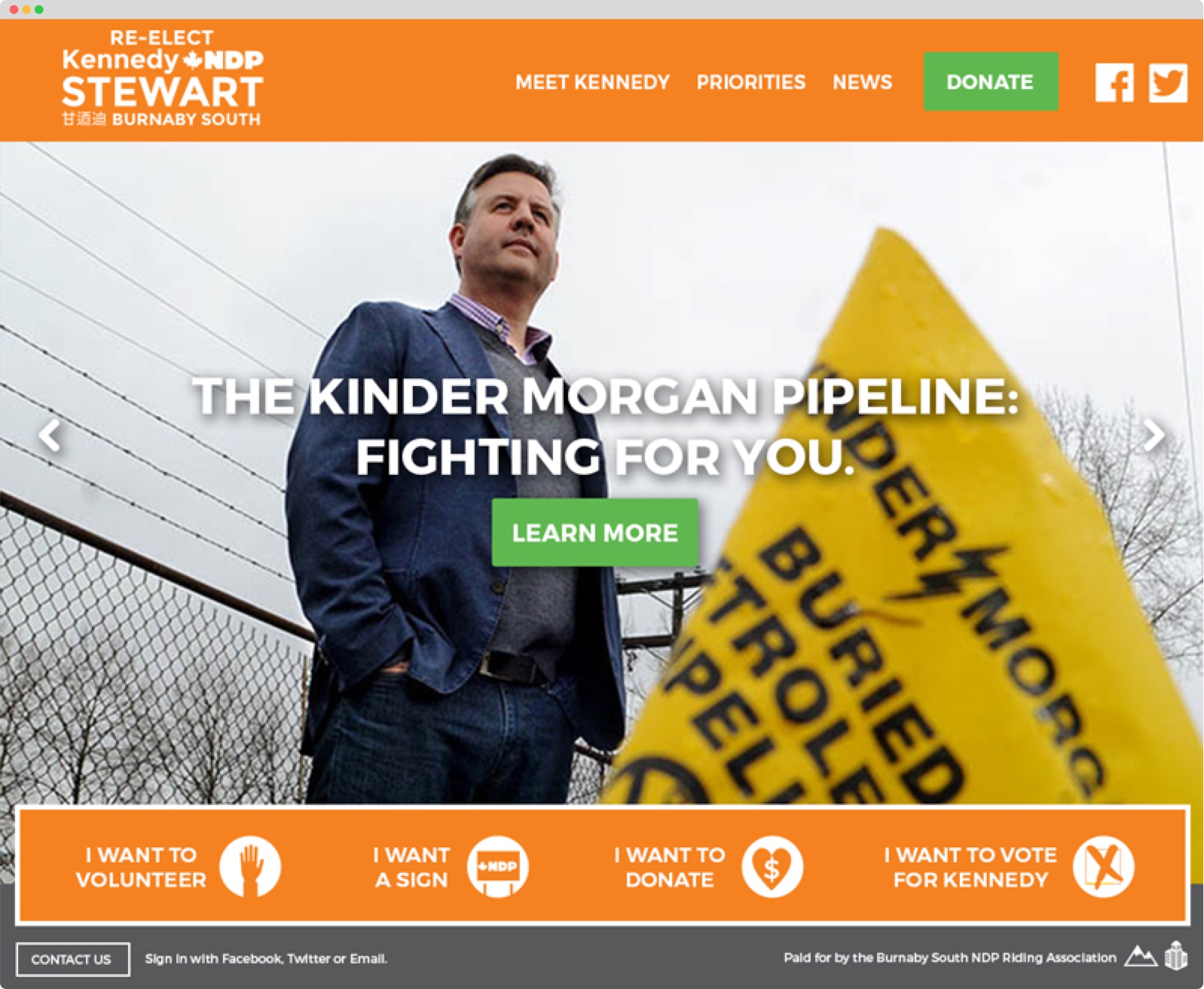 By being deliberate about the data collected from supporters online and through on-the-ground outreach, and having a central NationBuilder database to aggregate and store supporter data, Kennedy was able to effectively keep his finger on the pulse of support in his riding. The website we developed for him helped Kennedy break away from central party messaging to focus on key issues important to his constituents, like housing affordability, ending the war on science, and stopping the Kinder Morgan pipeline.

And, when national support for the NDP began to have an impact on local support in his riding in the final days leading up to the election, Kennedy was able to use NationBuilder’s communications tools — including the custom HTML email templates we designed — to help get his supporters out to early voting polls before support could drop any further.

In the end, investing in the right digital tools and being backed by experts helped Kennedy win in a tightly contested local race, and buck the national trend of failing support for the NDP. Kennedy not only won the race, but exceeded all of his campaign goals in terms of the number of supporters, volunteers, and donations raised.

Since the election, we’ve continued to work closely with Kennedy and his team to help run digital campaigns on key issues he is focused on in Parliament. Kennedy recently introduced the Candidate Gender Equity Act, a private member’s bill which aims to incentivize parties into running more women candidates and moving towards gender parity (even in 2016, women still only hold 26% of seats in the House of Commons).

We helped Kennedy launch a digital campaign to promote the Candidate Gender Equity Act, including crafting a unique visual identity for the campaign, designing and developing a custom, high-impact, action-oriented website, crafting shareable graphics and online ads designed to target other MPs and sway their vote, and more.

As is the case with many private member’s bills during a majority government, Kennedy’s Candidate Gender Equity Act was unsuccessful in gaining enough support in the House of Commons. However, the campaign did convince 23 Liberals to break with the Prime Minister and vote for his bill — the largest backbench revolt so far for the Trudeau government.

Overall, the campaign was successful in bringing a lot of attention to and promoting dialogue about the political glass ceiling still faced by women in Canada.

We also helped Kennedy expand his digital toolbox to include ActionSprout, a facebook-first digital organizing tool that allows supporters to complete actions like signing petitions or making donations directly from their facebook feed.

By using ActionSprout alone, Kennedy was able to engage over 7,000 new supporters, raise enough funds to recoup half the cost of the initial investment of expanding his digital toolset, and dramatically lower supporter acquisition costs. And, when combining ActionSprout with NationBuilder to power a supporter follow-up and fundraising campaign, Kennedy was able to raise more than double his initial investment. 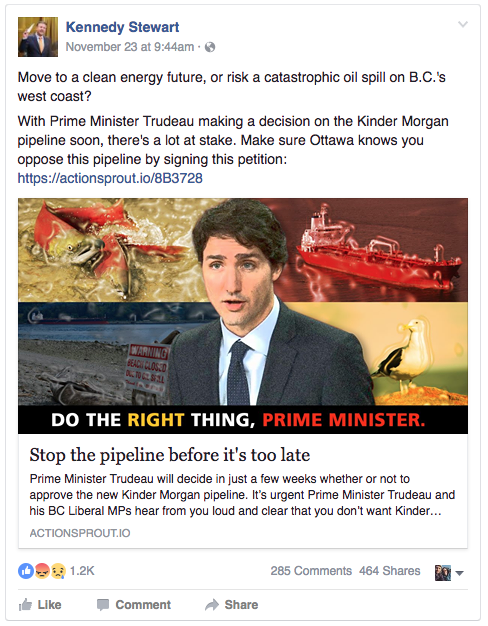 Through his Kinder Morgan opposition campaign, Kennedy has nurtured support from thousands of Canadians locally in his riding and across the country. This support has given Kennedy the opportunity to discuss opposition to the proposed pipeline in Parliament on repeated occasions, and hold Prime Minister Trudeau and his cabinet accountable.

We’re proud to have helped empower MP Kennedy Stewart with the digital tools that helped him retain his seat during the last federal election, and to continue working with him to help push for real change on issues important to the future of Canada.