This case study is brought to you by Skyrocket - a certified Agency based in Vancouver, Canada. Be sure to visit their website and see their previous NationBuilder work.

Coastal Jazz & Blues Society, now 30 years strong, hoped to create an online identity that would strike a chord with the history of its community, while still recognizing the progressive nature the genre is built from. Logos that had been presented in the past were specced out with structure and logic. Yet the brand was calling out for spontaneity and fun.

We realized quite early on that Coastal Jazz did not simply need someone to capture the brand, but the website had to maintain the essence of jazz and the celebration of improvisation at the same time. We felt a closeness to the jazz genre’s ability to disrupt classical norms and how it is akin to the way startups, and agencies like ours, are disrupting normal business conventions.

The creation of Coastal Jazz’s website was the result of a duet between our team and the longstanding relationship of music lovers in Vancouver. Together, Coastal Jazz’s online presence pulled the weight of the community, paid homage to its roots and altered the scale of visual communication for its audience.

The importance of public inclusion was the first note in the array of ideas for the Coastal Jazz website. Rather than building a festival website where jazz devotees visit only once a year, the website needed to become a platform where music lovers could connect and engage with each other. By implementing NationBuilder we shaped the Coastal Jazz website into just that, a community platform. We succeeded in centralizing the collective excitement of Coastal Jazz’s over 20,000 enthusiasts into one online focal point. Leveraging the fanfare of the audience meant a bolder, vibrant brand. 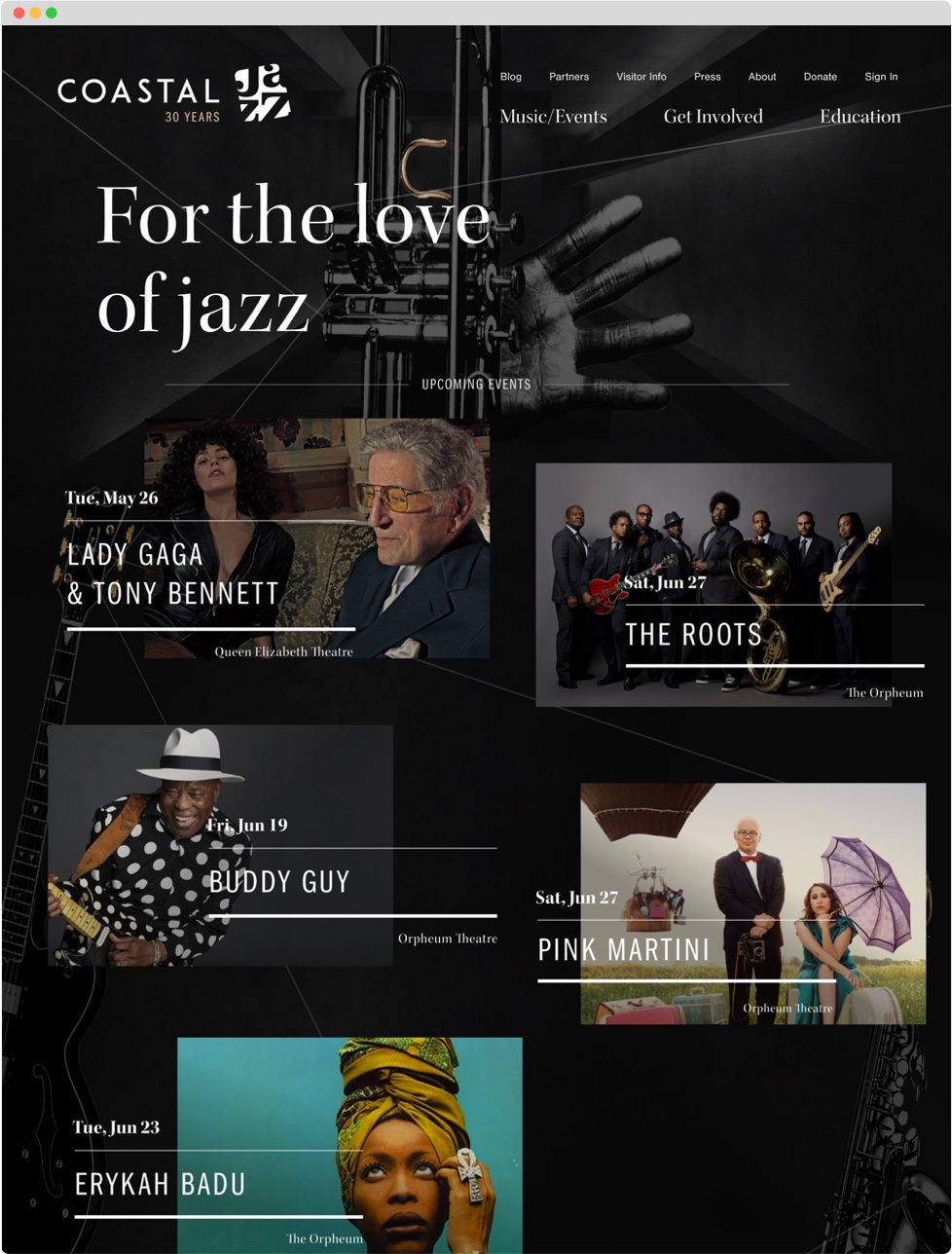 With NationBuilder’s CRM-like capabilities, including a payment system, we fused Coastal Jazz’s internal and external communications together.

This turned the organization’s website into a strong and fully functional platform that could include volunteer sign-up, donation collection, membership, and integration with social media management among many other things.

When Creative Director, Michael Parks, and UX Designer, Arman Keyvanskhou, brainstormed the mock-ups for the Coastal Jazz website, they realized the classical element of the grid structure was contradictory to what they were attempting to create. Grids allowed information to be presented through hierarchy and framework; jazz embodied everything but those qualities.

By designing the layout of the website with a broken grid, this allowed the website to visually speak to both the history of jazz and Coastal Jazz’s active role in fostering its future.

We couldn’t ignore how similar the history of improvisation in jazz was to the disruptive nature of the tech industry. The ability of the jazz genre to remix the traditional practices of classical music in order to create a new style of sound could be compared to startups’ alterations of old capitalistic norms.

Paying tribute to the past

Coastal Jazz struggled with trying to unify posters and events that included a vast range of logos and credits. The plethora of all these identities in one piece of promotional material presented a problem in their own logos inability to stand out.

The “jazz chop”, a boxed logo containing the word “jazz”, was a prominent part of the brand aesthetic. We helped pay a strong tribute to the history of the organization by keeping the original design in the representation of their personality. “We opened up the box the “jazz chop” lived in and changed its angle to modernize the feel,” Michael emphasized. 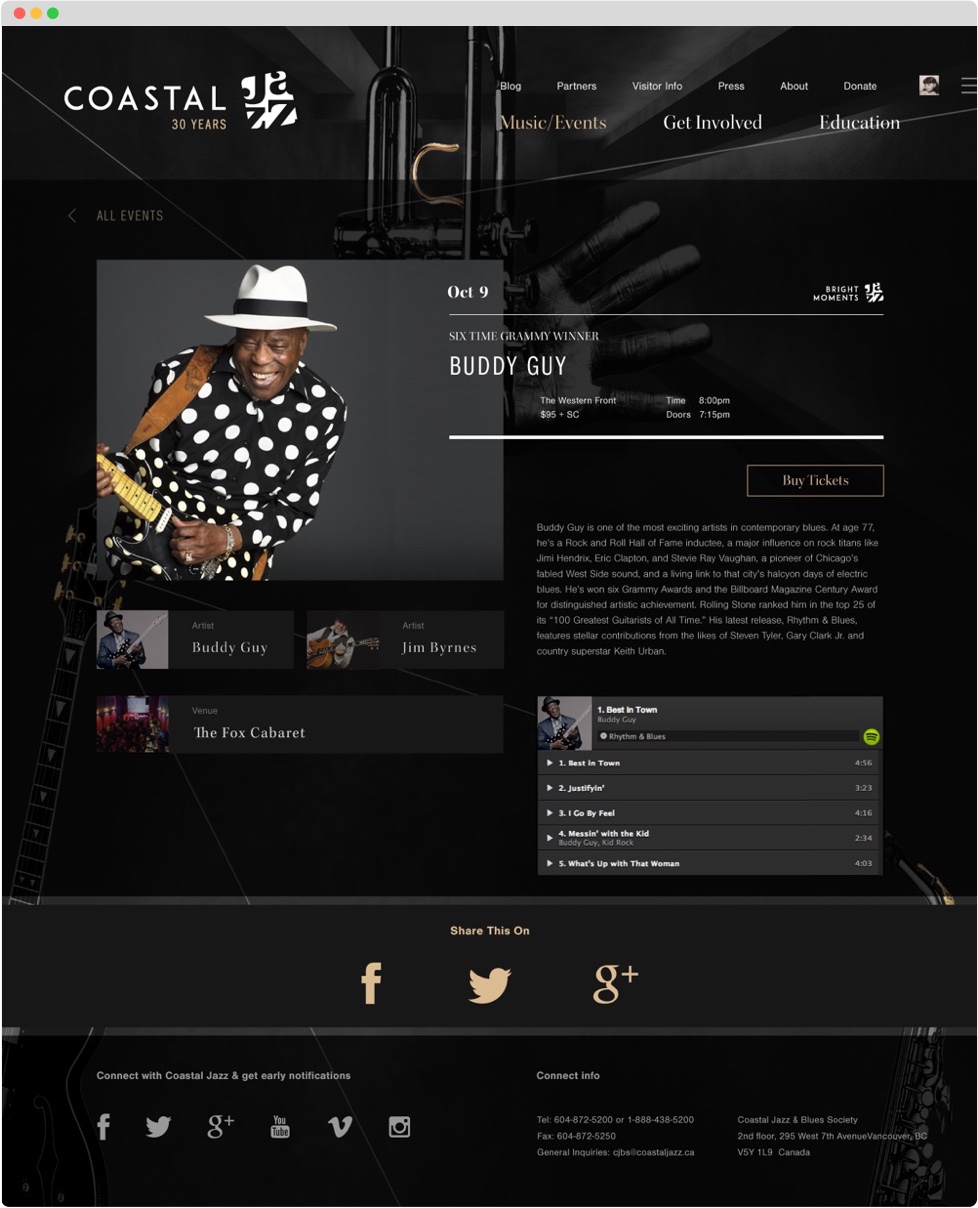 “We built every other idea on top of the background image,” Michael mentioned, revealing that the rest of the initial mock-up design was improvised once the background image was created. “Quite surprisingly, this became something that tied the offline community together.”

This visual communication captured their identity so intuitively, it inspired Coastal Jazz to commission a painted style of the image in celebration of their 30th anniversary. “Who would have thought the website’s wallpaper would dictate what the feel of the brand would look like throughout?” Michael laughed.

The image became a part of Coastal Jazz’s brochure and poster content, bringing a beautifully consistent thread that supported the brand identity.

Coastal Jazz is not only a brand that has an estimated audience size of 615,000 people, but it has generated over $35 million in economic activity for the city. Since the launch of the new website, the first quarter saw a 60% increase in users and a staggering 242% increase in social traffic.

This was a brand that was not rebranded but polished to its true essence and given an identity it could hold as a jazz community.

“What we’ve done to Coastal Jazz seems like a natural evolution,” Mo concluded. “Now that you look at it, you can’t imagine it looking any other way.”