This case study is brought to you by Principle Co - a certified Agency based in Sydney, Australia. Be sure to visit their website and see their previous NationBuilder work. 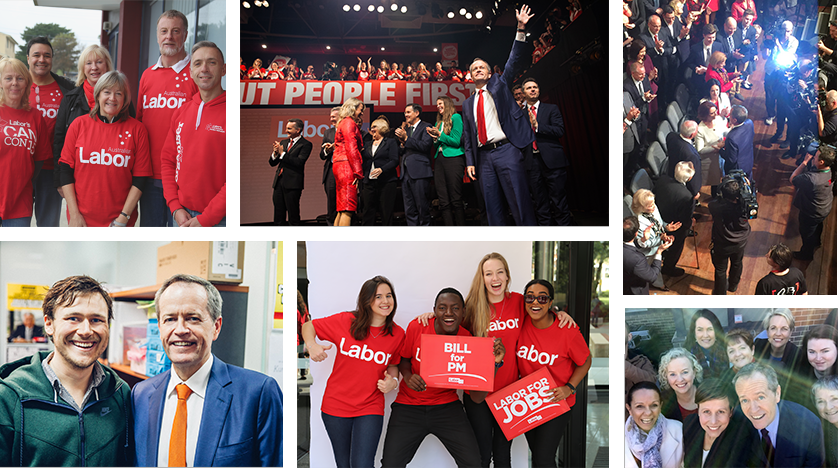 A year out from polling day, journalists and commentators had written off Bill Shorten and Labor's chances of winning the 2016 Federal Election.

The Liberals also had all the advantages. Bigger budgets, the comfort of incumbency, some of the most experienced political strategists around and fresh momentum with Malcolm Turnbull installed as leader.

But by election day - Bill Shorten and the entire Labor team had made so much progress it resulted in one of the tightest election results in Australian history.

One of our earliest decisions was to rebuild the campaign’s online organising infrastructure on NationBuilder. We were keen to take advantage of the latest techniques and tools from around the world - and to do that the campaign needed a strong foundation.

NationBuilder ended up powering all of our masthead online properties - such as the Labor Party’s website, Bill Shorten’s website, and all of our tactical microsites. NationBuilder was also the foundation for our email program, online volunteer identification and online fundraising programs.

As internationally recognised experts in the NationBuilder platform, we were then fully integrated with the campaign for three months where we continued to develop the platform as needed - working closely with the exceptional internal digital team.

We rolled out the best digital persuasion tools available, applying proven techniques from overseas while relentlessly testing to develop our own tactics. Together - we knocked it out of the park. 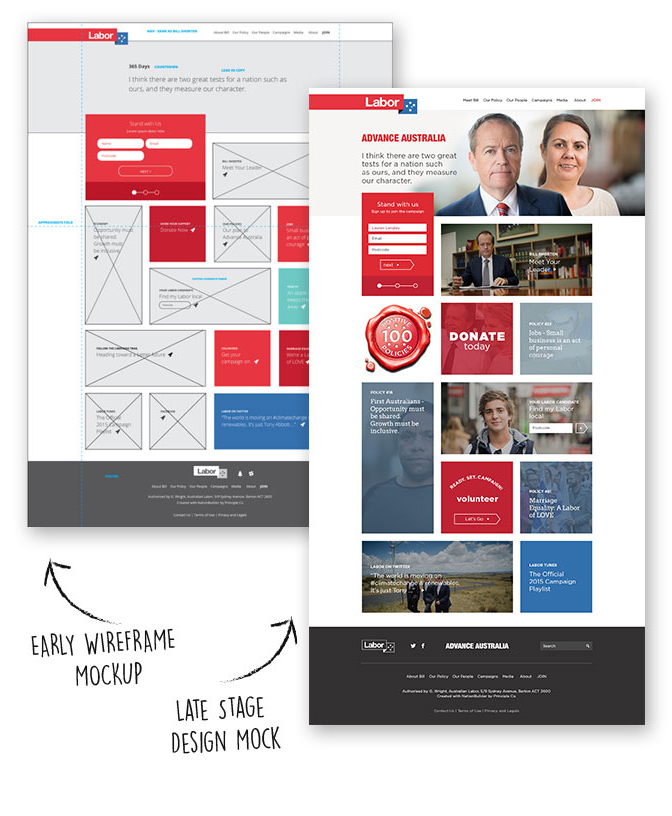 We took the campaign's strap line seriously - employing design thinking strategies to make sure we put people at the centre of everything we designed and developed.

Combining this approach with Principle Co’s extensive experience, having developed more than a hundred websites on the NationBuilder platform since 2012, we crafted a website and suite of digital tools which built a deep empathy with the people we were designing for - keeping the campaigns values at its core.

This included building multiple iterations of the site for a range of devices and screen sizes, while also ensuring the site could be easily read by those with limited eye sight, colour blindness or other accessibility needs.

By taking responsive design to a whole new level, we were able to make clear that no matter where you were or who you were - the Australian Labor Party wanted to connect with you.

A big online platform for a big task

Federal Election campaigns are big, complicated and fast moving. If technology slows the campaign down it can make the difference between an effective campaign and a total disaster.

Applying design thinking principles - we planned ahead, identifying each potential pressure point and designing a solution before it became a problem. Keeping it simple for the public ironically meant creating one of the most complex behind the scenes NationBuilder deployments to date.

This meant identifying the needs of the many different teams within the campaign - from the fast pace of the media team, the complex methodical detail of the policy team, the focus on fundraising and engagement from the digital team or the nuanced language and creativity of the advertising team.

Each of these key areas required the ability to have complete confidence and autonomy while managing their content. So we created three totally distinct websites - ALP.org.au, BillShorten.com.au and 100PositivePolicies.org.au. Threading each site together so the end user would never notice they had moved from one domain to another, but allowing those on each team internally to manage content themselves and to do it according to their unique work patterns and pressures. 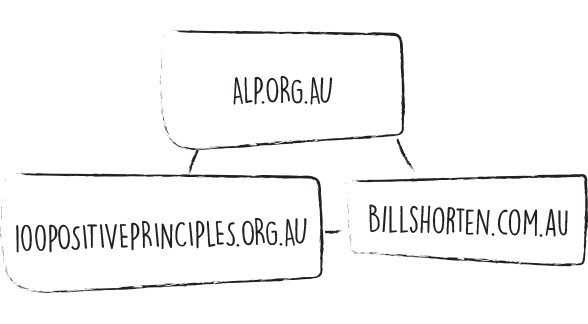 Federal Elections are projects unlike any other. Your work needs to make a difference, and you’ll know within 8 weeks if you’ve succeeded.

We arrived with significant experience building websites which convert - including lessons from our award winning work during the NSW State Election. However this experience is just a foundation of assumptions.

That’s why we heavily tracked every variable across each Labor Party website, and made ongoing improvements to make sure people could find what they needed, and take action without any friction.

These improvements - such as tweaking layout, colour schemes and language - significantly improved the quality and quantity of actions across a range of measures. From the amount of time people spent on the site, how easily they could find what they wanted on each page they saw, how much they scrolled, how deep they got into the sites content or how many people would complete a donation or volunteer form - there was nothing we didn’t keep an eye on and improve if we could. 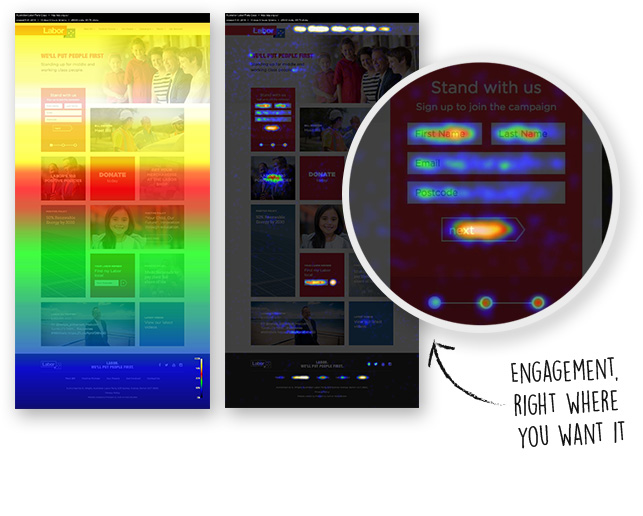 Will you stay for a cup of tea?

With so much advertising and media coverage flying around during an election campaign, it’s not a challenge to rack up the page views. The real challenge is - how can you get people to connect with your content so that they’ll hang around longer? And how can you get them to do something while you’re there?

Our optimised websites made sure that anyone who landed on one page would spend as long as possible there. Over the course of the campaign, Australian’s spent 74,065 hours (3,086 days, or 8.46 years!) learning about Bill Shorten and Labor’s positive plan for Australia.

Meeting people where they're at

We’re all passionate about something - but it’s different for every one of us. A core part of the campaign’s approach was to put people first - which we did by creating a broad spread of personalised sites which speak to the personal concerns of ordinary people across Australia.

From dense policy arguments to simple cost of living calculators - this was made relevant and simple. And hundreds of thousands of people visited these sites, with large volumes of people sharing and interacting with this content in their own channels afterwards. 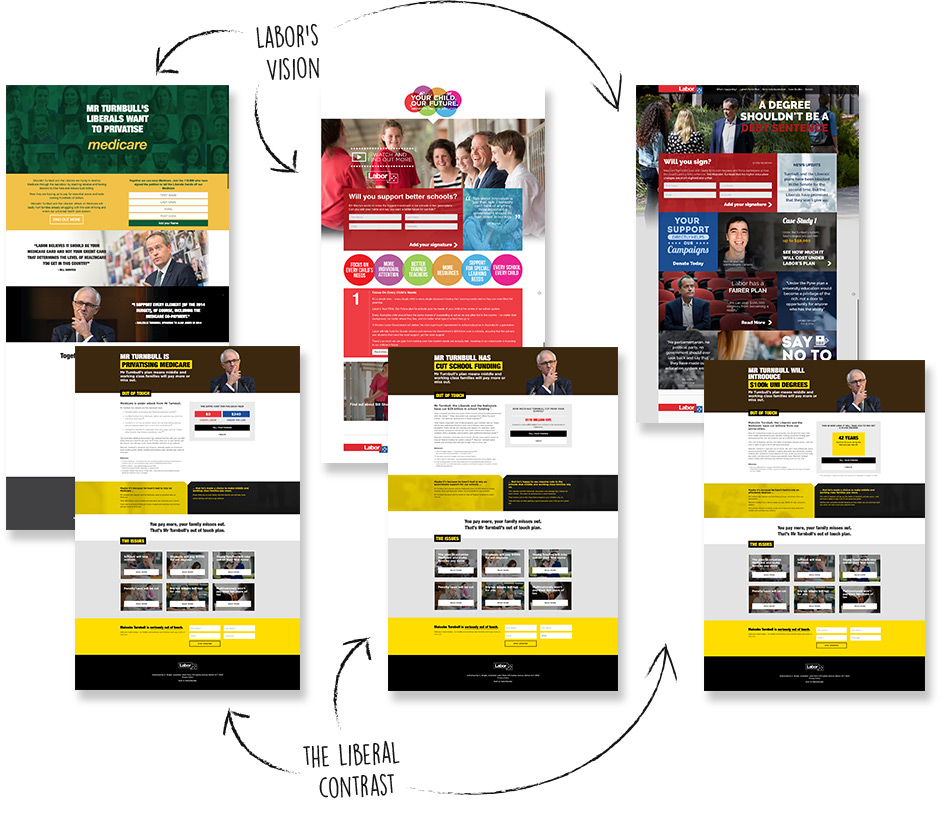 With an experienced and effective team driving engagement through social media and email towards a strong website - the campaign was able to raise big money through small dollar, grassroot donors.

To maximise donors, the campaign focused on improving the number of each people which completed the next step at each stage in the process. This meant building an enormous spread of donation pages, with different interfaces, to squeeze out 3% and 5% improvements. Small numbers improvements - which have a huge impact on the amount of money raised.

In total Labor raised a staggering $1.1 million online in small donations – averaging just $48 – during the campaign and more than $2 million during the entire election cycle. 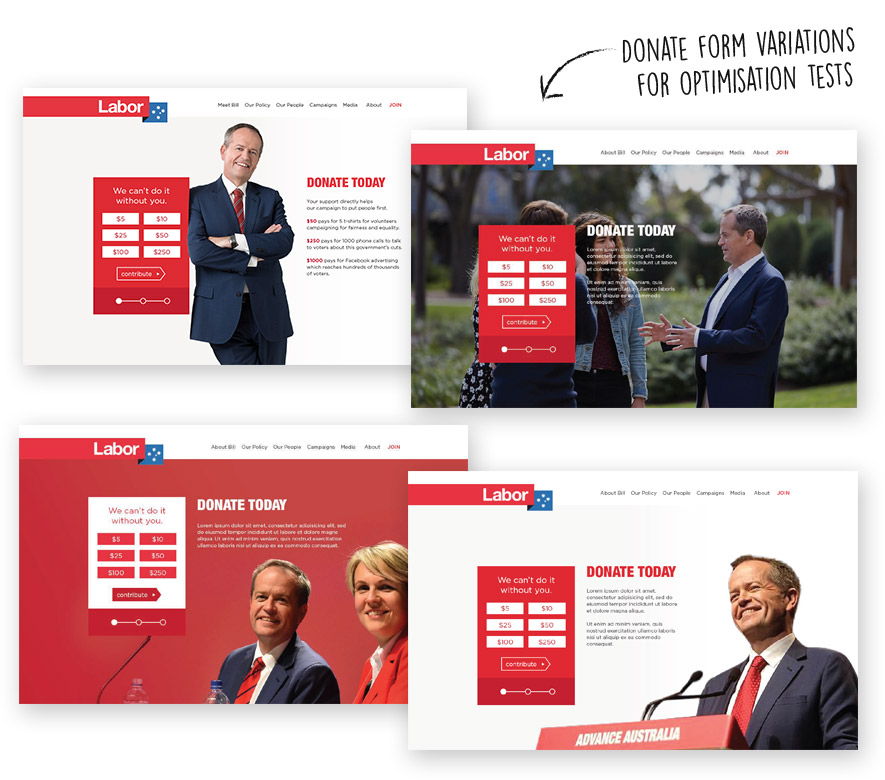 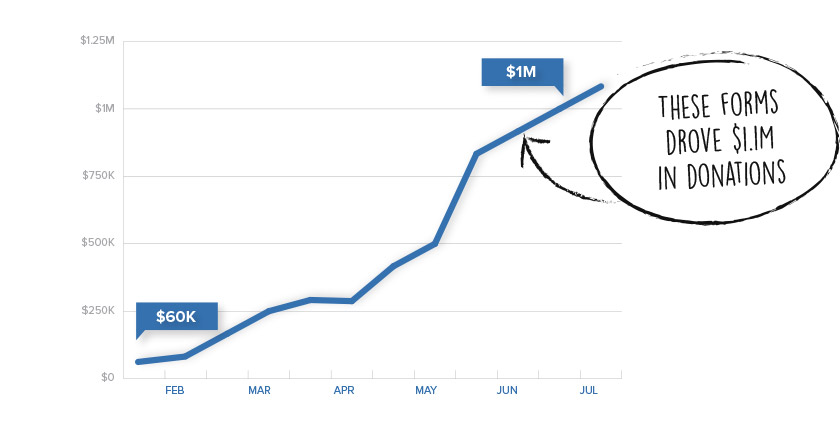 Did we mention testing?

In the lead up to and during the campaign we tested over 400 different distinct variables in order to be confident people were seeing the most effective content possible.

What does that look like? Well you might have noticed that in our original designs above, the sign up box on the home page was a vibrant Labor red. But it turns out that Labor blue is a stronger contrast colour and drove a sign-up increase of 3%. We wouldn’t have known if we didn’t ask! 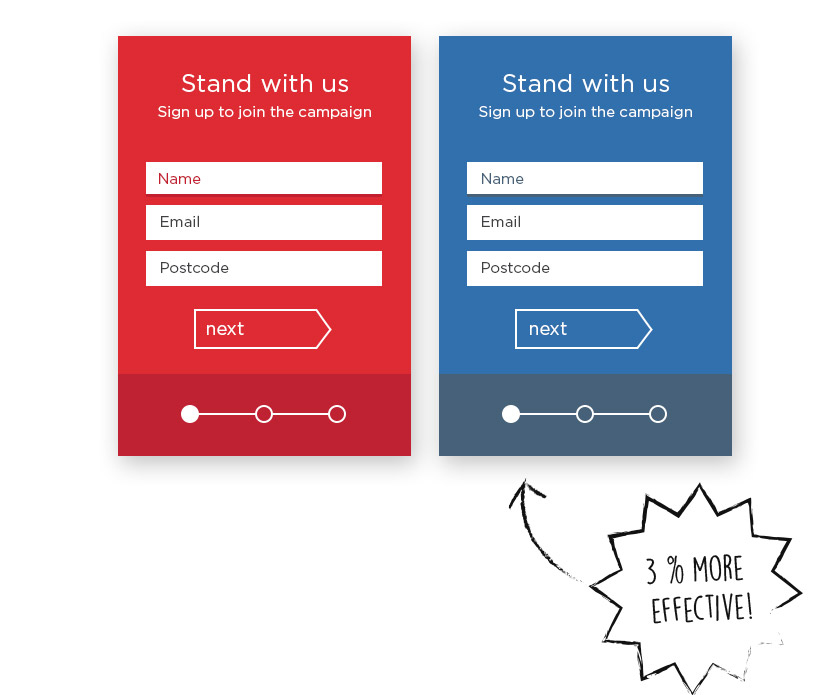