This case study is brought to you by Herman-Scheer - a certified Agency based in Los Angeles. Be sure to visit their website and see their previous NationBuilder work.

Following in the footsteps of a civil rights legacy, GirlTrek’s national health movement motivates women not just to walk, but to be the change-makers in their lives and communities.

Founded just seven years ago by two college friends who were sick and tired of seeing the women they loved die early deaths, GirlTrek has grown rapidly to become the largest health nonprofit serving Black women and girls. The movement has received honors and recognition from multiple organizations, including Teach for America’s Social Innovation Award in 2012. Among their partners and allies are Kaiser Permanente, the NAACP, and former First Lady, Michelle Obama. As of 2017, GirlTrek has inspired 84,166 walkers to take the GirlTrek pledge across 27 cities.GirlTrek’s ultimate mission? To recruit 1 million walkers by 2018.To achieve this feat, GirlTrek needed an online platform that would inspire new members to join the cause, empower leaders with the tools they needed to organize, and garner more support from their communities.

GirlTrek’s co-founders had seen our work for Hashtag Lunchbag on NationBuilder. They were impressed by our agency’s ability to capture the spirit of the organization with rich, visual language that brings movement, personality, and life to their online home. They told us they needed a partner agency that would step up and get their movement going at full speed, and we said, “Let’s do this!”

The making of a movement

In the tradition of the strong women who came before them, GirlTrek members walk to heal their bodies, inspire their daughters, and reclaim their communities. Vanessa and Morgan, GirlTrek’s co-founders, started their movement because they believed that the radical act of self care could combat the unprecedented health crisis facing Black women in the United States. 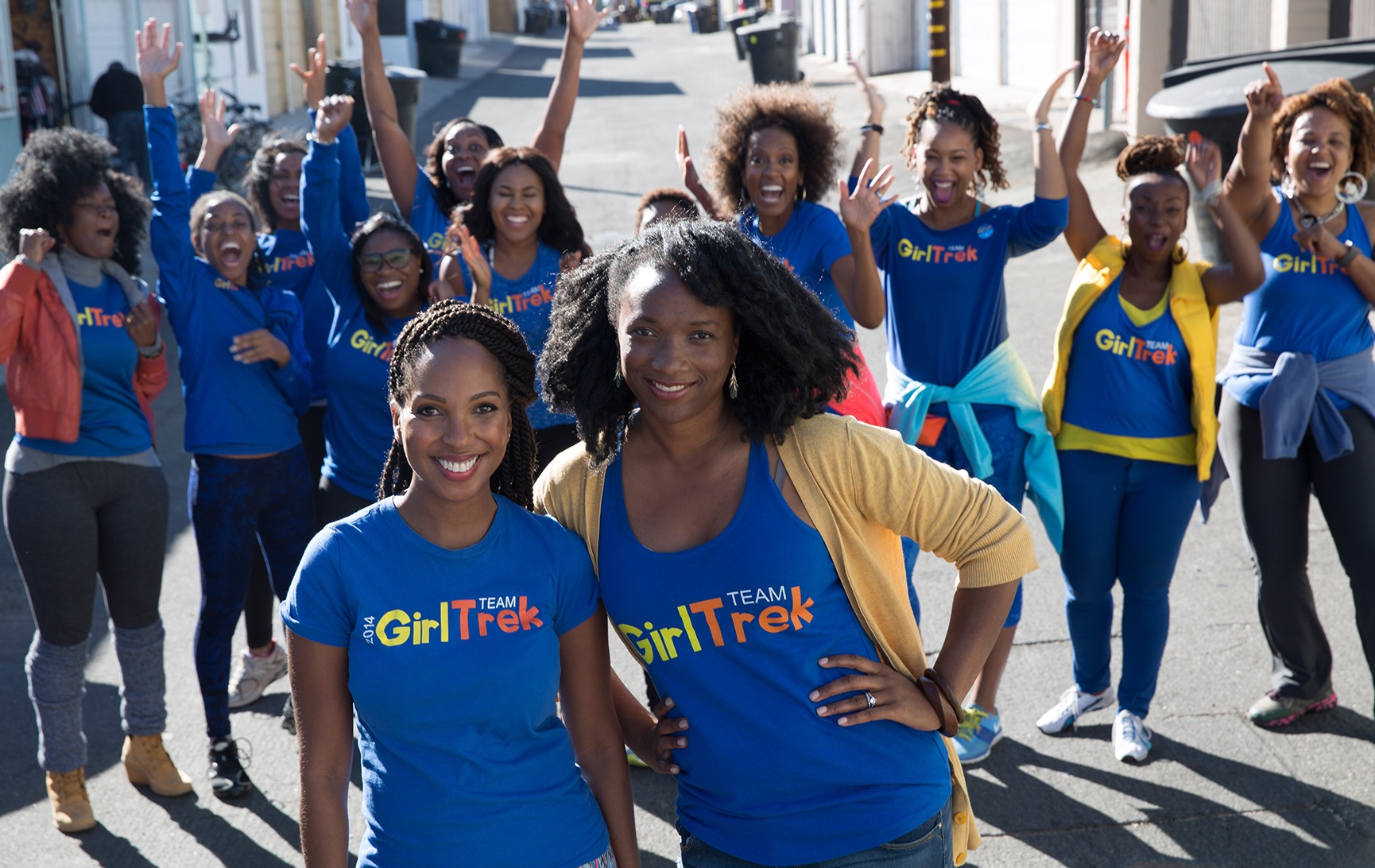 Vanessa and Morgan began expanding GirlTrek’s ranks by challenging their friends and family members to walk with them.In the six years that have followed, the GirlTrek movement has made incredible strides, and they are making a huge impact on the lives and communities of their supporters.As they continue toward their goal of recruiting 1 million members by 2018, we remain committed to supporting that mission however we can.

Bringing a nation of GirlTrekkers together online

A standard website was simply not worthy of GirlTrek’s mission. Building the GirlTrek site on the NationBuilder platform allowed us to create an online community that would act as GirlTrek’s headquarters, where walkers from across the nation could join together, organize events, and build momentum for the mission.

Chock-full of custom features, the GirlTrek site simplifies the recruiting, planning, and fundraising processes that empower the continuous growth of the movement.

Introducing the world to the real women of GirlTrek

As the first thing a visitor sees when navigating to the GirlTrek website, we knew the background video living on their homepage needed to capture the energy and passion of the GirlTrek sisterhood.

Showcasing real Trekkers having a blast as they take over the streets in their communities, this video helps potential Trekkers envision themselves as a part of the GirlTrek movement.

We identified joining the cause as the most important action a visitor could take on the site. So, we placed the “Join” button front and center, directly on top of this video. With a single click, the viewer can turn her vision into a reality, and take the GirlTrek pledge.

In order to expedite the growth of the GirlTrek movement, increasing a key few actions were imperative to the mission:

To accomplish these goals, we produced and strategically placed action-inducing videos in integral areas of their website. Pairing important web features with videos that boost the power of each call to action, we are able to increase viewers’ engagement with GirlTrek’s site and inspire more of the specific actions that will further advance their mission.

These videos live within the web features they accompany. GirlTrek representatives who appear in these videos even reference the aspects of the page the visitor is currently on, which creates an incredibly immersive experience for the viewer.

Once a GirlTrekker has created a NationBuilder profile, they are able to connect it to their MapMyWalk account, which keeps track of each walk they participate in. Giving members a way to see this data in real-time helps them visualize the positive impact they are making on their health, the larger movement, and the communities they represent.

In addition to inspiring friendly competition and generating recognition from their peers in the movement, this feature provided the GirlTrek team with incredibly powerful data. This data helped them truly understand their members’ activity patterns. 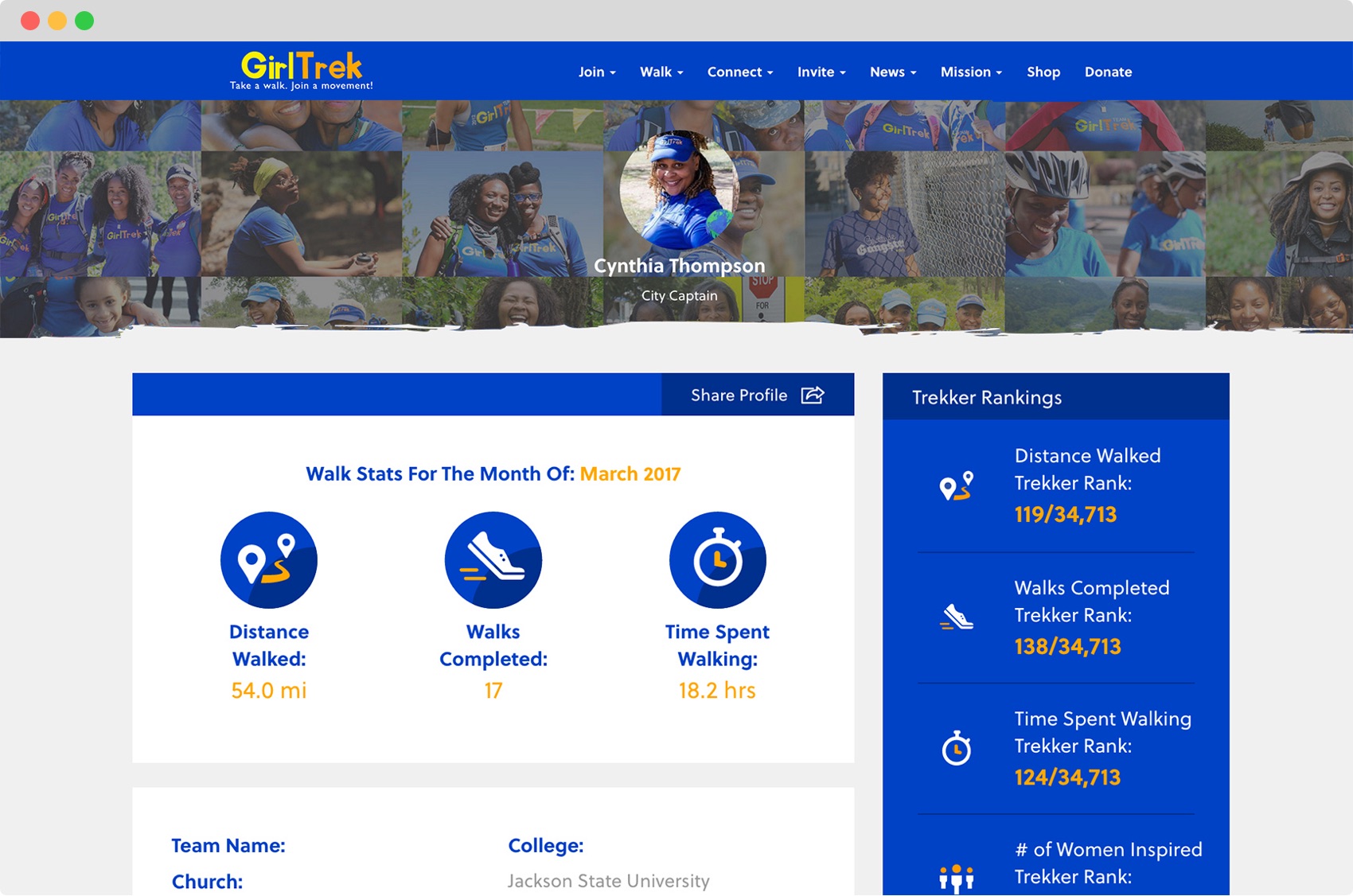 Custom leaderboard: a friendly race to the top

To excite and motivate GirlTrek walkers, we built a custom leaderboard that reflects actions outside of NationBuilder’s core leaderboard statistics. Using the data gathered from individual members’ MapMyWalk accounts, which are dynamically synched to the site, GirlTrek’s leaderboard highlights:

As we mentioned in the previous section, the leaderboard brings a fun, competitive element to GirlTrek’s movement. This feature serves as a powerful motivator for members to push themselves harder and walk further in support of the cause. 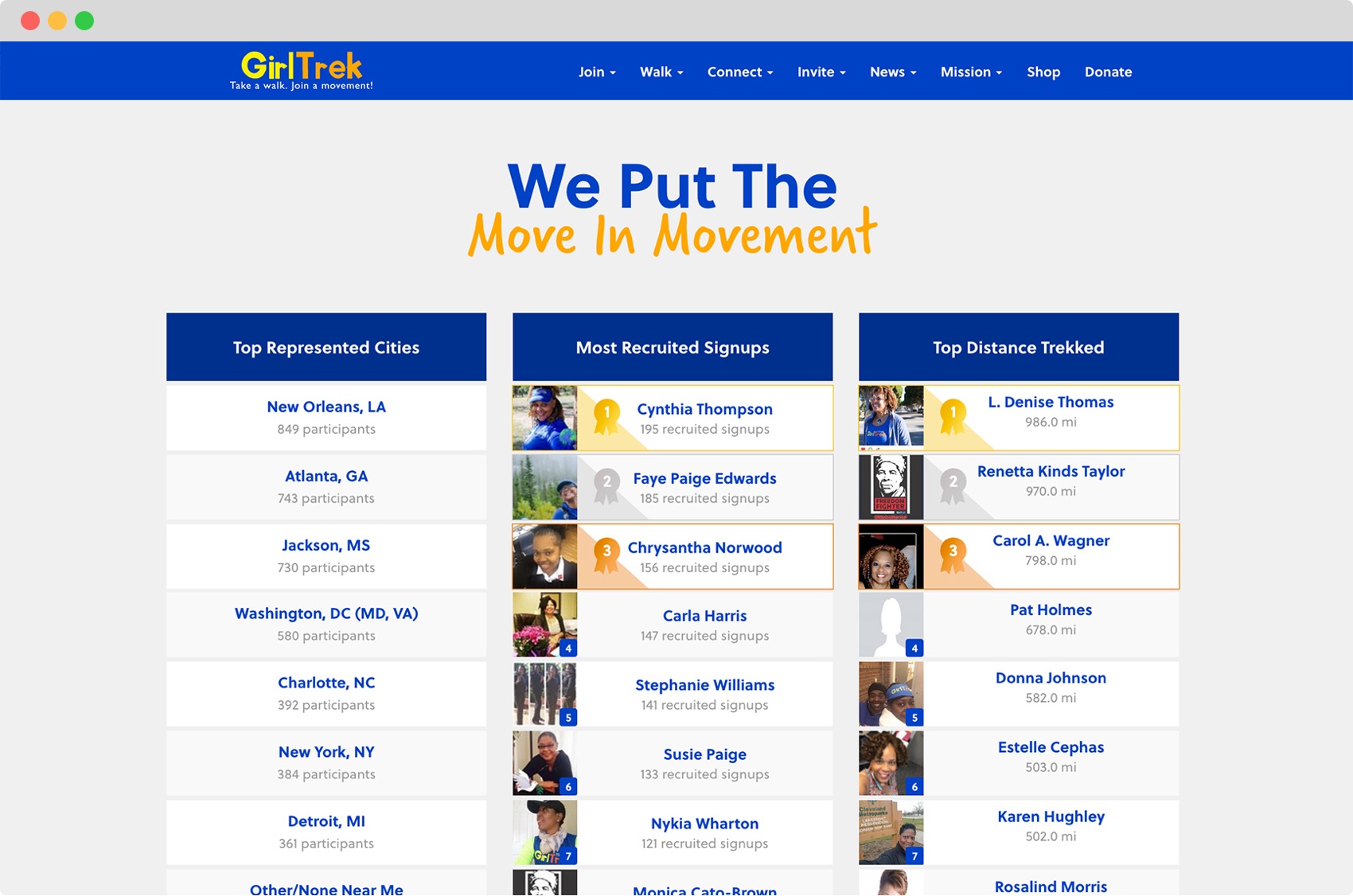 We gave NationBuilder’s event calendar template a dramatic facelift in order to improve GirlTrek’s user experience. With this customized calendar, GirlTrek members are able to easily find or host GirlTrek walks in a city near them.

The straightforward navigation allows walkers to view upcoming events in both list and map formats. All of the pertinent event information - including the address, date, and time of the walk - is provided with the listing. With a single click, a member can join their desired trek. 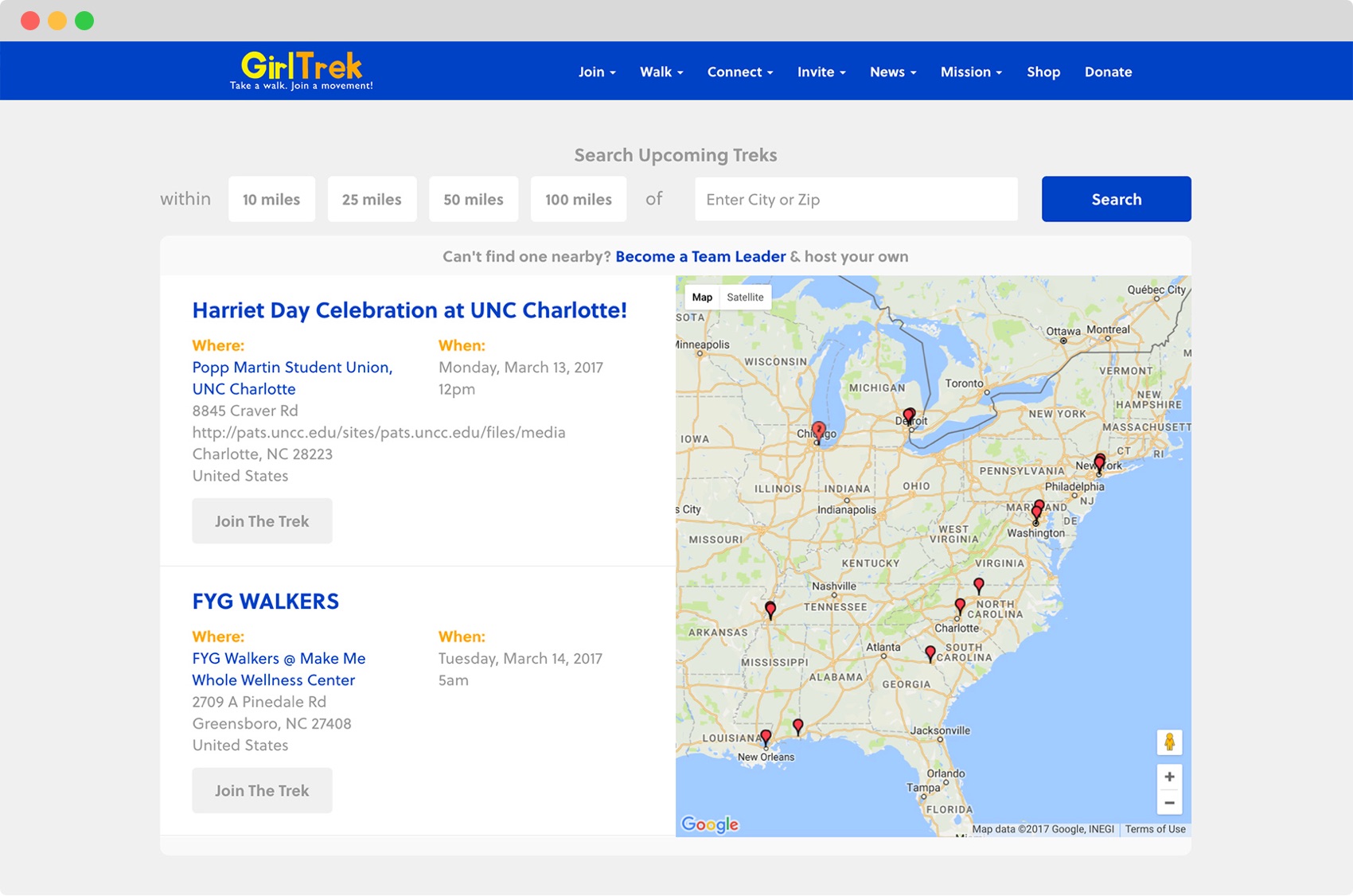 Grassroots organizations like GirlTrek flourish when community members take initiative and get involved. To encourage more women to step into leadership roles, we included an Organizer's Toolkit that provides all of the basic resources needed to host a GirlTrek walk.

Some of these resources include a field guide, an annual calendar, campaign materials, a Powerpoint presentation, videos, photo tips & tricks, and other assets that allow members to effectively promote the cause. 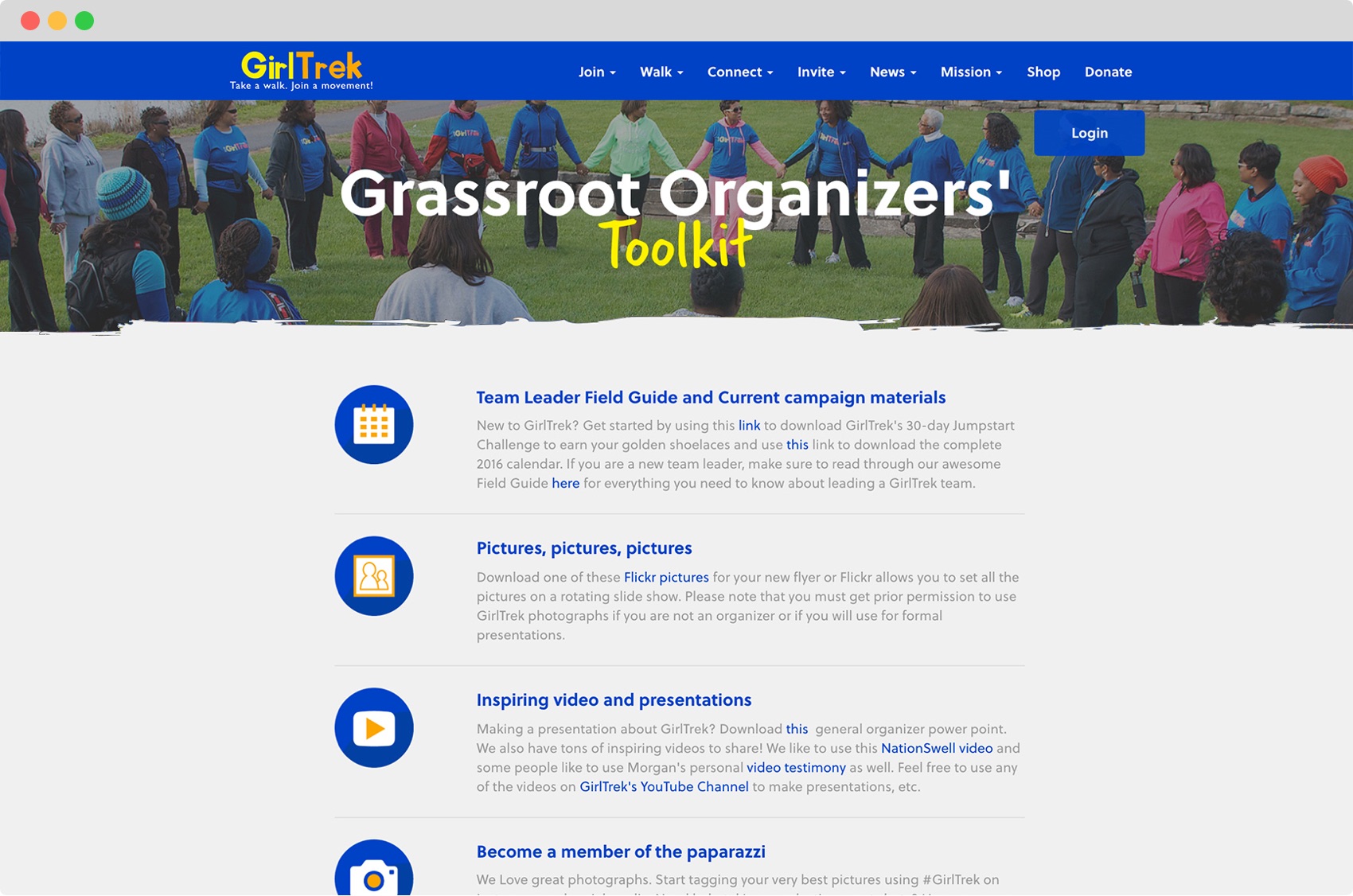 Raising funds to fuel the movement

We designed GirlTrek’s custom Shopify store with the goal of increasing the fundraising efforts that allow their movement to continue growing strong. The photography and video work we produced for their newly updated online storefront enhances the shopping experience and attracts more monetary support to fuel the movement. 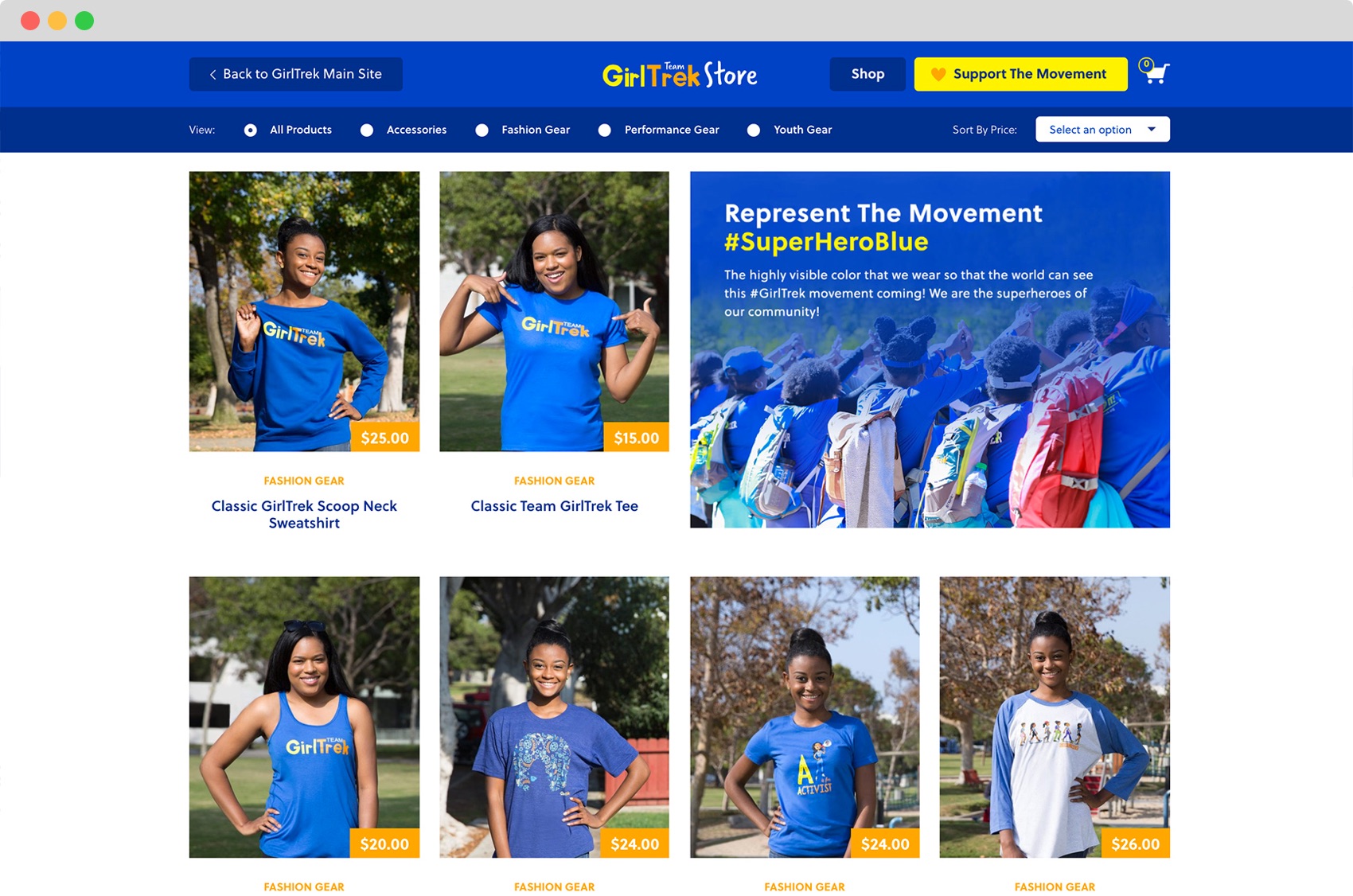 Since we began our partnership with GirlTrek, we have watched their movement achieve great things on a regular basis. In the last year alone, their movement has grown by over 50,000 trekkers, solidifying their status as the largest health nonprofit for Black women and girls.

In continued support of their mission, we are actively pursuing new ways to help GirlTrek hit their goal of 1 million walkers by 2018.