This case study is brought to you by RA2 - a certified Agency based in Calgary, Canada. Be sure to visit their website and see their previous NationBuilder work.

When we started working with the Alberta Party, our goal was to set up tech infrastructure and tools to support the Party’s rapid growth and ambitions for the coming election, while providing strategic insights from their data. 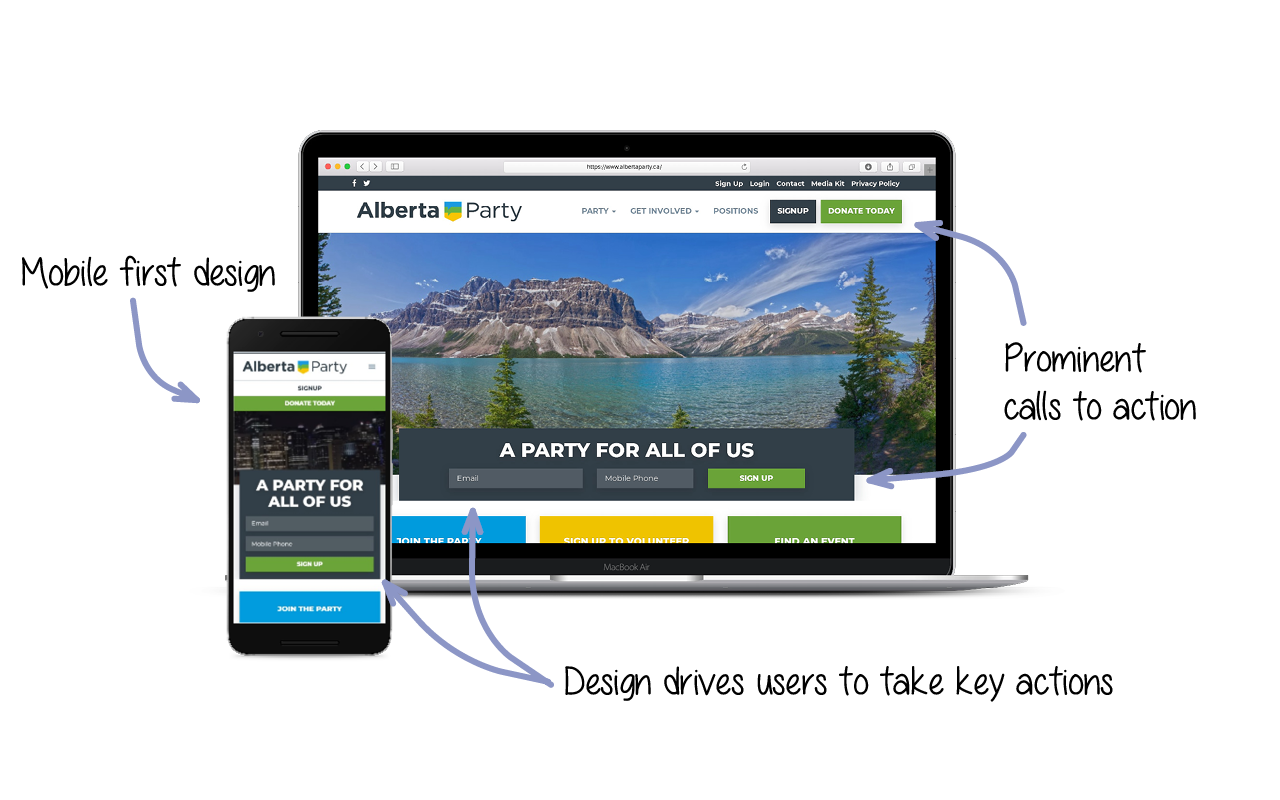 We used NationBuilder to provide the central campaign—plus 87 local campaigns—with a straightforward structure and scalable processes that allowed the campaigns to focus on what matters: engagement with voters on the important issues of the election.

Supporting local teams across the province

The Alberta Party ran a full slate of candidates across Alberta in all 87 electoral districts. This posed the challenge of designing tech infrastructure that could support 87 local campaigns and the provincial campaigns simultaneously, while leaving them in control of their campaigns. In addition to the central party team, the tech infrastructure would need to support up to 87 local campaigns and their teams, which resulted in hundreds of users that are managing the technology. 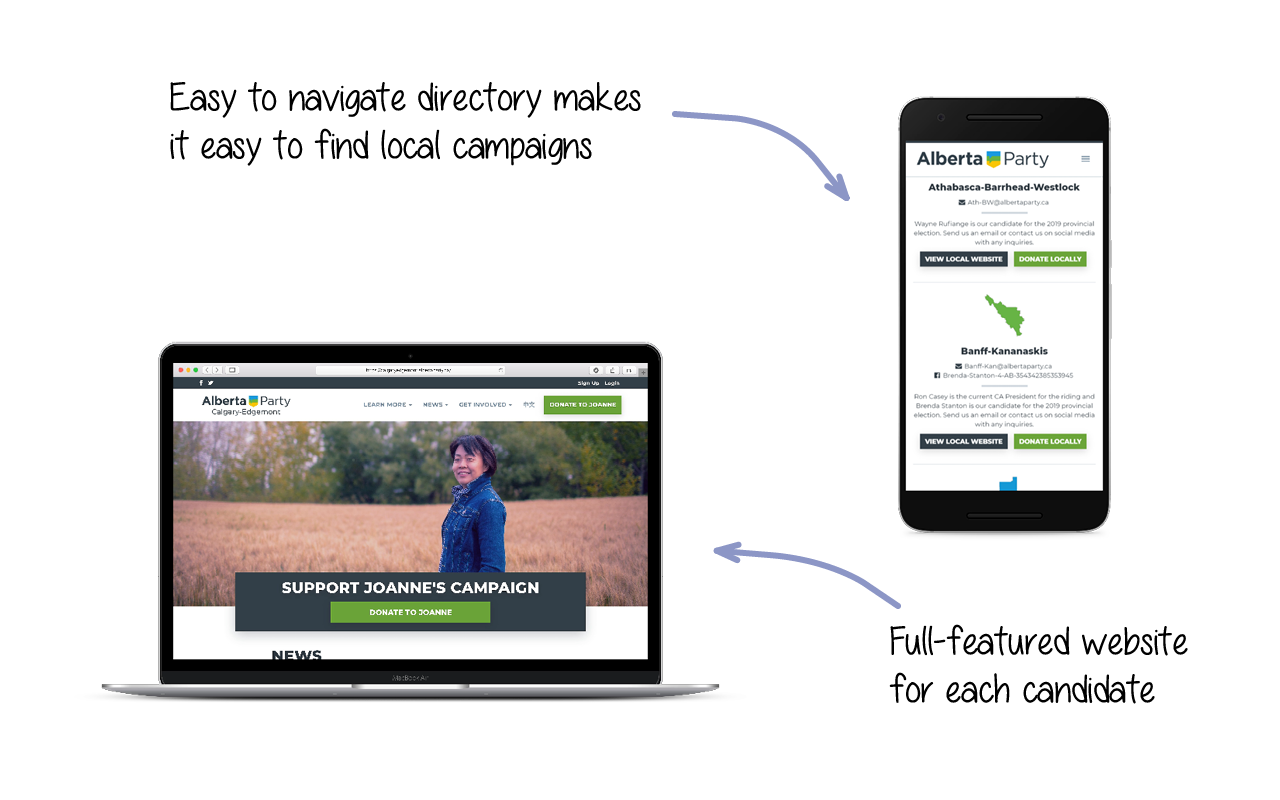 We created a technical structure where every candidate was provided with their own local website that integrated seamlessly with the party’s database, payment systems and reporting structures. This helped the local campaign teams to spend more time canvassing and less time worrying about data integrations and reporting.

Our team designed a dynamic onboarding process to ensure that the systems and processes put in place would scale for all 87 campaigns without overwhelming the party’s resources with support requests.

As the campaign progressed, the Party’s canvassing teams were talking to thousands of voters across the province either by door-to-door canvassing, phone calls or text message, and the Party needed an efficient and reliable way to capture that data. 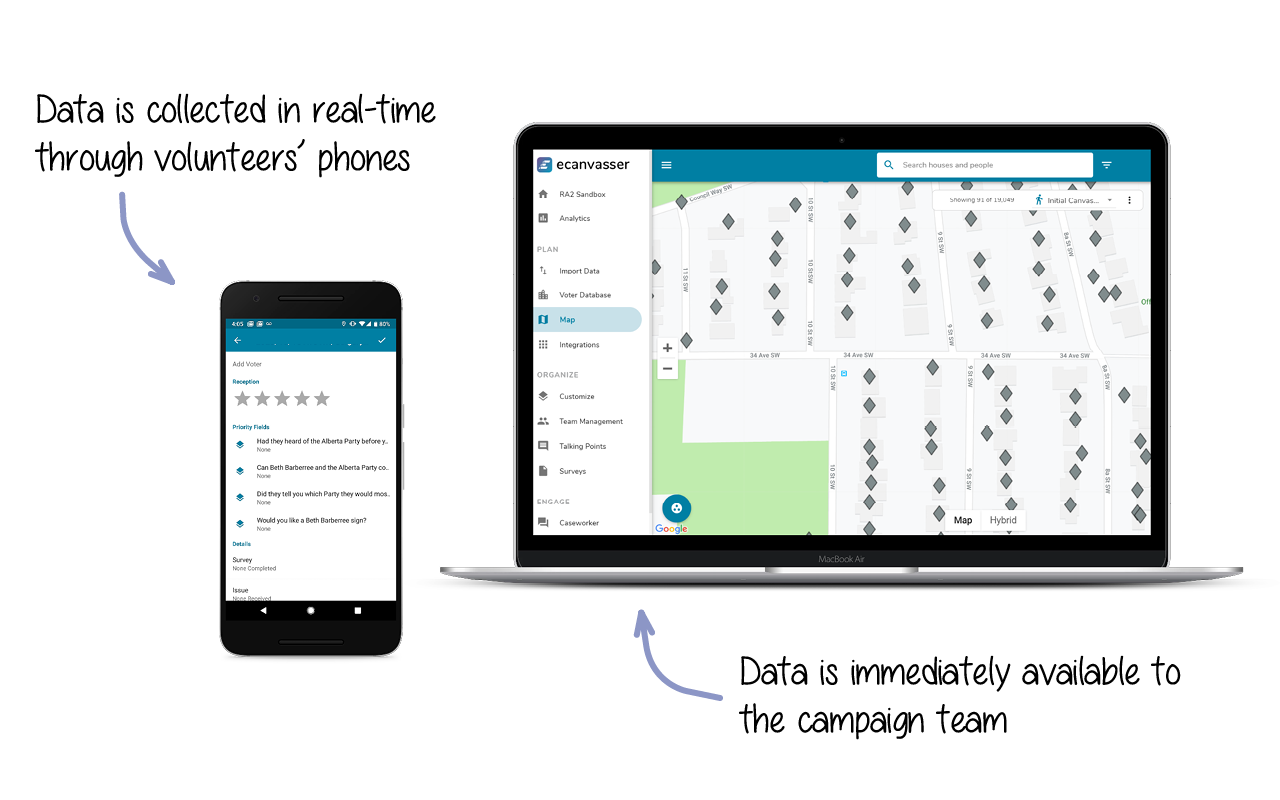 We worked with the Party to implement campaign tech that managed operations and ensured valuable data was captured and fed back to the core campaign team. Our team supported the Party’s canvassing efforts with voter engagement tools such as Ecanvasser for door-knocking, CallHub for phone engagement, and Avochato for SMS engagement.

Data from these tools was then fed back into the party’s database in near real-time using automated integrations. These integrations were custom-built to take advantage of NationBuilder’s API so that all the Party’s key data was accessible in one place.

As the number of local campaigns grew, the core campaign team found it was taking a lot of effort to get the latest insights to the local campaigns. To overcome this, our team developed a secure dashboard that let party staff and volunteers login and access the latest Party data. 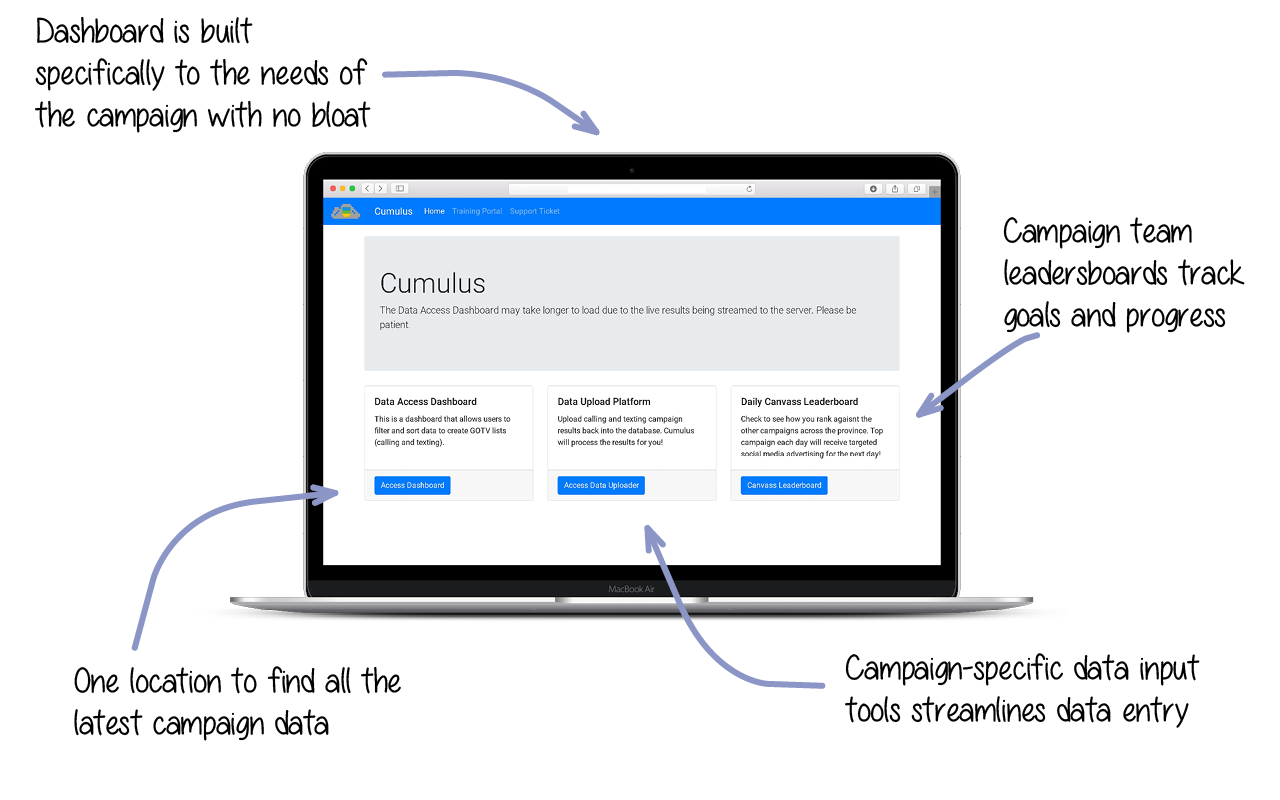 The dashboard lets team members access up-to-date calling and texting lists, as well as the latest insights from the Party’s ongoing research and predictive modeling. They were also able to see up-to-date campaign statistics and how their team was doing compared to other teams across the province.

During the campaign period, the dashboard was used by hundreds of volunteers and proved crucial to voter contact and get out the vote efforts.

Change took place rapidly during, and in the lead up to, the campaign. A small army of staff and volunteers needed to be trained on NationBuilder and the other campaign technologies.

To address this need, we created an internal party website that hosted Party-specific how-to videos along with written documentation detailing how to use the Alberta Party’s systems. The site also featured a support tool that connected volunteers with the Party’s tech team in cases where they needed additional help.

Our team also provided ongoing training sessions across the province—both in person and via video conference—to help volunteers get familiar with NationBuilder and the other tools. These sessions successfully trained hundreds of volunteers and campaign staff to effectively take advantage of these technologies.

The end result was a complete transformation of the Alberta Party’s tech infrastructure. We implemented NationBuilder along with several other campaign tech products and custom integrations that supported the Party from membership management to communication to fundraising. With this, the Party was able to collect and take advantage of much more of its data.