How Saskatchewan Union of Nurses made the difference 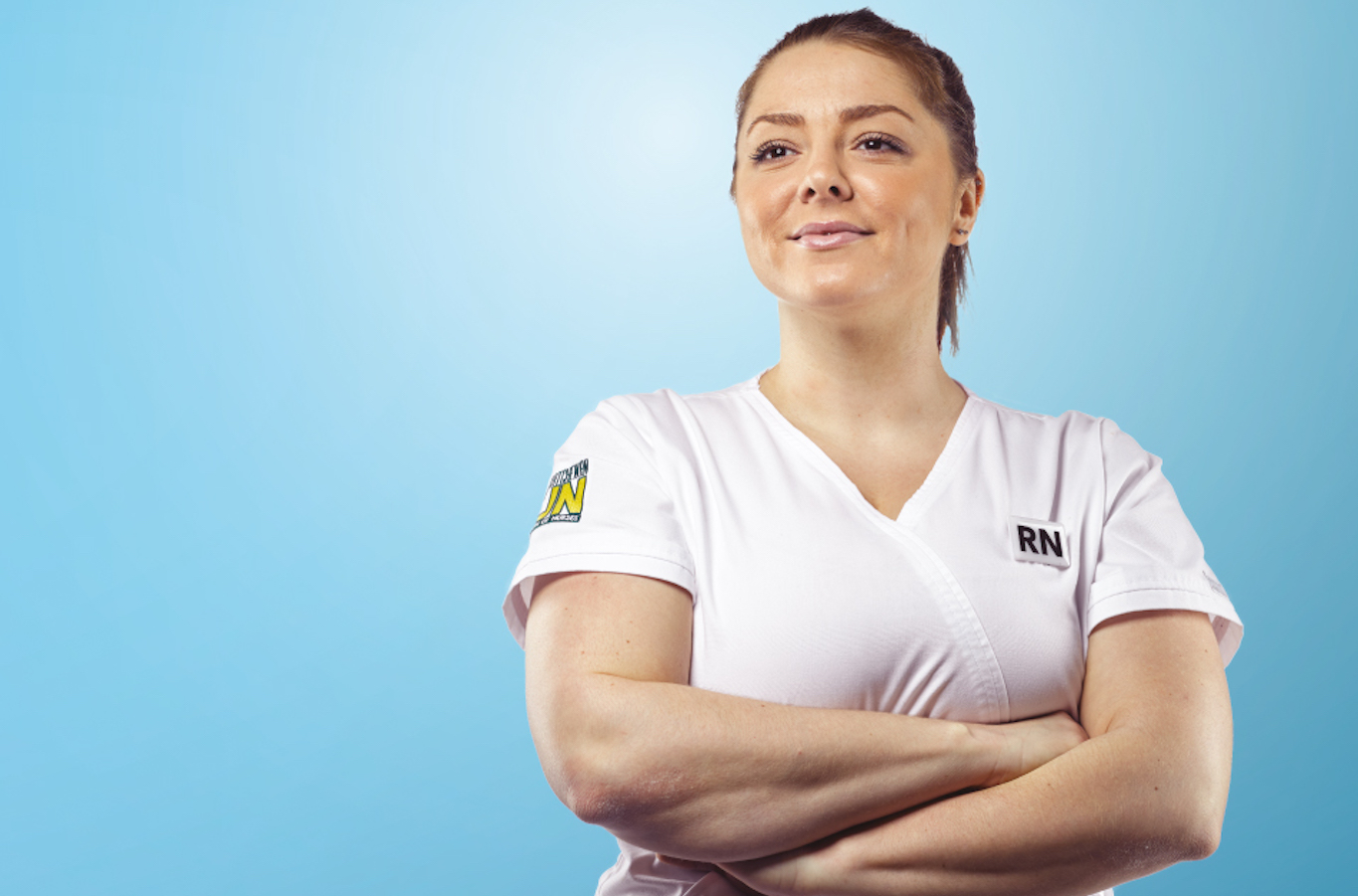 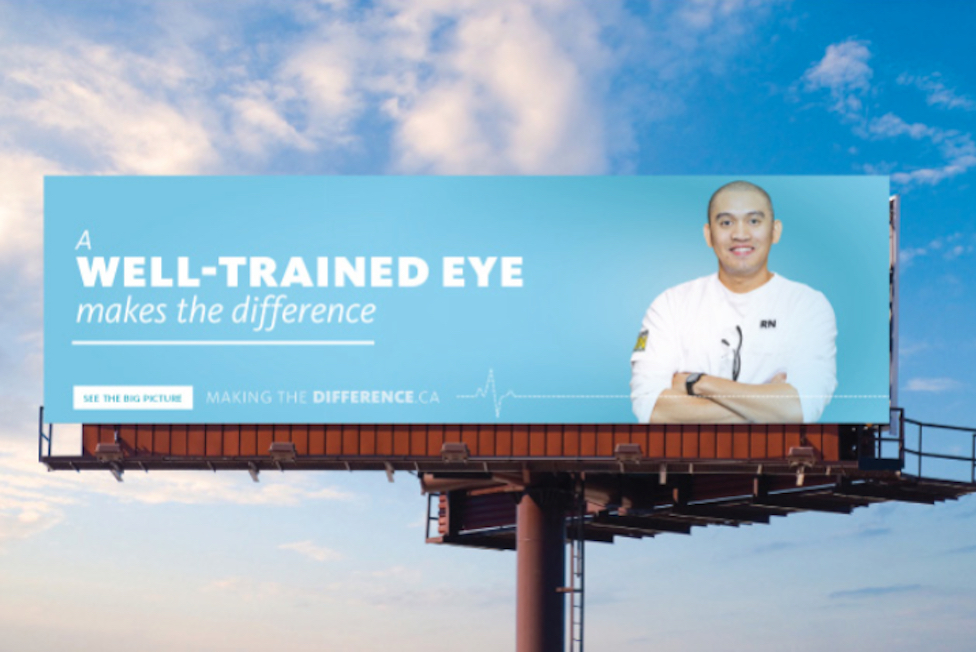 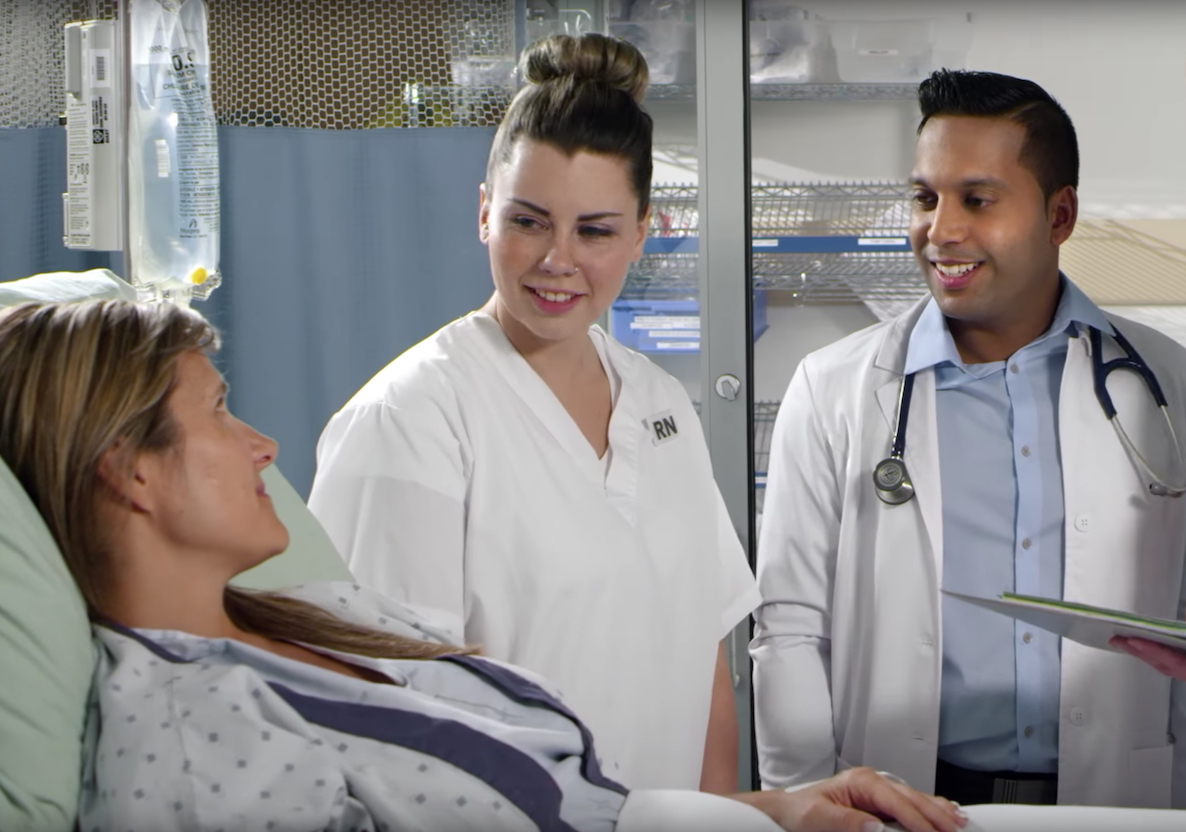 Registered Nurses (RNs) across Canada were being backed into a smaller and smaller corner by local hospitals when the Saskatchewan Union of Nurses (SUN) came to us. They had been campaigning for a year with many conventional media assets: print and video ads, testimonials, and research to validate the facts that nurses save money, improve patient safety, and increase efficiency. What they needed was a new website that could house their extensive content. Making the Difference, the public awareness campaign site we created with NationBuilder, was designed to strike the right balance between engaging their supporters and avoiding the political friction that would interfere with bargaining.

We developed a conservative digital strategy to create modest list growth among members and the general public, making the most of the web as a storytelling platform with emotional instead of informational appeals. SUN’s existing television spots provided us with beautiful video and graphics we could use to evoke the feeling of being in hospital and under the care of a knowledgeable professional: safe and comfortable. We repurposed videos of nurses speaking to the camera, asking site visitors to "hear from the real experts," serving the dual purpose of reflecting the lived experience of SUN members and framing RNs as experts in their work. All content could be filtered by type, with patient stories featured alongside nurses’ stories and research to form a richer context for the campaign. 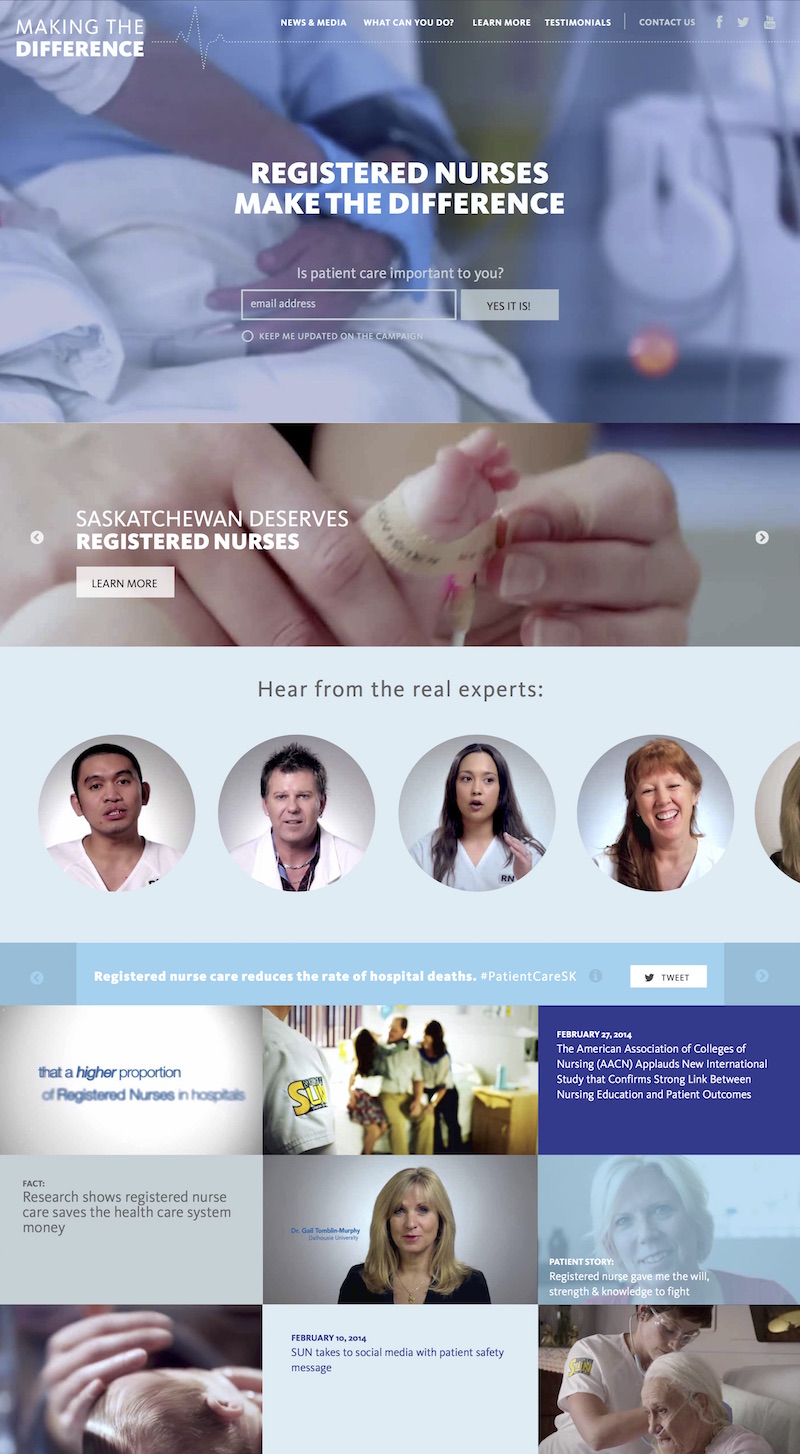 A few months after we completed the original contract, SUN wanted to build on the site and create an integrated print and digital campaign that was digital-first. The first step was to revisit our initial strategy, look for opportunities to extend the digital strategy to print, and develop a concept.

Having an RN with you makes you feel bulletproof, comfortable, safe. SUN had taken portraits of real nurses looking proud and confident, exactly the kind of people you want to see when you need help. Our initial “Heroes” showed RNs with arms crossed or holding clipboards, eyes fixed on the horizon like a superhero in a movie poster. Each nurse was given a superhero name (“The Visionary”, “The Innovator”, “The Collaborator”, “The Decision-Maker”). These were paired with inspirational quotes in the RN’s voice and calls to action to drive people to the site. The ads ran on billboards and in newspapers across the country as well as in targeted display placements online. 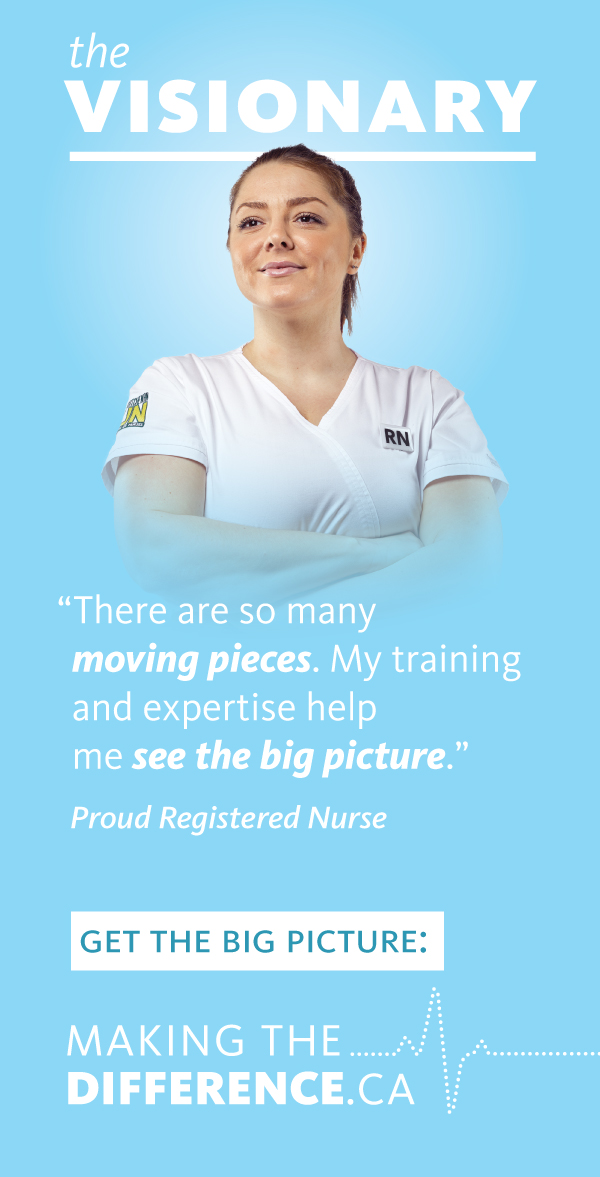 In the fall, the politics of the campaign were coming to a head. Health care was a key issue in an upcoming spring election. Surgical and ER wait times across the province were at a historical highs. The government’s response was to spend millions on consultants that tied up nurses in workshops in the name of efficiencies that never came. Negotiations between the union and the Province were not moving.

For phase two of the campaign, the goal was still to educate, but we wanted people to sign up, tell their own stories, and share the campaign with their networks. We revisited our previous strategies and focused on demonstrating value, differentiation, and the unique qualifications of RNs. This time, though, we switched our storytelling from a nurse’s perspective to a patient’s perspective.

The experience of health care, we pointed out, was scary, measured in minutes and hours. I had a personal illness for a couple of years that kept me in bed one-to-two days a week with debilitating migraines and nausea. One day it reached a peak and I had no choice but to go to the hospital. I remember sitting stubbornly on the steps of my apartment, refusing to go to the hospital while my husband cursed and coaxed me up. I knew that I would have to wait for hours for relief, first in the emergency room and then in a hospital bed. Suffering at home just seemed like a better option.

“It was really scary. Just being in the hospital is scary, but she was there — she made me feel warm inside. She was compassionate, caring, and skilled. Her knowledge of her job truly made a difference.”

We wanted to use the lived experiences of patients and how they engage with nurses, and use these experiences to inspire action. We sketched out 3 journeys: ER, Childbirth, and Long-term Care. In each journey we laid out the touchpoints where RNs make the difference in healthcare—not only to the patient but also to the system (for example, how RNs reduce wait times in the ER). We created three detailed and media-rich landing pages for each journey containing calls to action throughout. Each told the story of a patient and how their health, treatment, and recovery was aided by an RN.

The display ads and website takeovers that landed people on these pages were extensions of these journeys and used photography from the perspective of a patient along with quotes from RNs themselves to talk about how they aid patient care and safety. We used close-up shots of nurses “RN” lapel pins to convey that these pins let you know you’re in good hands. Print ads in newspapers across the province gave additional context and pushed people to the website.

Along with the billboard, print, display, takeover, and landing pages, we developed a strategy that extended to Facebook and Twitter with a content calendar, recommendations for targeting, and a campaign arc. A multimedia approach to storytelling for our NationBuilder site allowed us to build richness and communicate information layer upon layer.

This story is brought to you by cStreet Campaigns, a NationBuilder-Certified Agency based in Toronto, Canada.

With a gripping online campaign, Defense for Children International Palestine shed light on children’s rights violations and created a groundswell of support around the world.

One Love tells the story of relationship violence

Over the last two election cycles, Marsy’s Law For All has passed victims' rights legislation in six states. Now, they’re taking a networked approach to win in six more and expand nationwide.